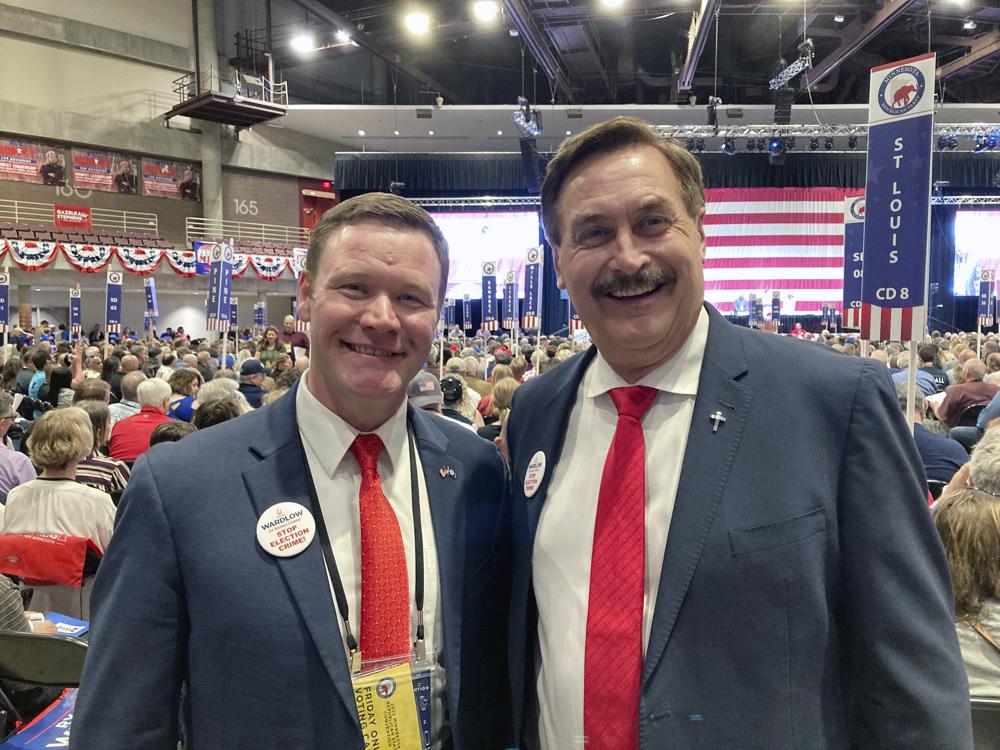 Republican attorney general candidate Doug Wardlow, left, and MyPillow CEO Mike Lindell work the crowd at the Minnesota GOP state convention in Rochester, Minn. on Friday, May 13, 2022. Wardlow is general counsel for MyPillow, while Lindell has risen to national prominence for perpetuating the baseless claim that Trump won the 2020 election. (AP Photo/Steve Karnowski)

ROCHESTER, Minn. (AP) — All eyes were on the governor’s race at the Minnesota Republicans convention Friday to endorse a candidate to challenge Democratic incumbent Gov. Tim Walz in the November election.

Dr. Scott Jensen, a vaccine skeptic and former state senator; former Senate Majority Leader Gazelka; and outsider Kendall Qualls were among the top candidates heading into the convention, where the 2,200 delegates must complete their work by a 6 p.m. Saturday deadline for vacating the Rochester Mayo Civic Center.

All the gubernatorial candidates at the convention have pledged to honor the party’s endorsement and forego the right to run in the Aug. 9 GOP primary, assuming there’s no deadlock. While there was plenty of merchandise on sale in the lobby declaring loyalty for Donald Trump, the former president has not endorsed anyone in the Minnesota races.

Also on the convention agenda were contested races for the endorsements to take on Democratic Attorney General Keith Ellison and Secretary of State Steve Simon. Delegates made their first endorsement Friday when they backed Ryan Wilson, who was unopposed in his bid to take on State Auditor Julie Blaha. Delegates and party leaders are hoping at least one of their candidates becomes the first Republican elected to statewide office since Gov. Tim Pawlenty was reelected in 2006.

The delegates got one fight out of the way when they agreed to use electronic voting after State Chairman David Hann warned that using paper ballots, as some delegates had advocated for security, would delay the process and run the risk that the convention would run out of time and end in failure without endorsing a full slate of candidates.

The convention was expected to turn to the governor’s race on Saturday. Jensen was expected to lead on the first ballot, but it takes 60% of the delegates to win the endorsement. The family physician from Chaska got the earliest start and raised the most money. He built a national following on social media as he framed his COVID-19 vaccine skepticism — and opposition to mask mandates and school and business closures — as support for medical freedom.

Among the other leaders, Gazelka, a state senator from of East Gull Lake, has been stressing law and order in the wake of the sometimes violent unrest and spike in crime following the police killing of George Floyd in 2020. Qualls, who is Black, has underlined his rise from poverty to success and his outsider status. He raised nearly $468,000 in the first three months of the year, the highest first-quarter take for any candidate. Also seeking the endorsement are former Hennepin County Sheriff Rich Stanek, dermatologist Neil Shah and Lexington Mayor Mike Murphy.

In Friday’s first contested race, Kim Crockett got the endorsement for secretary of state after Kelly Jahner-Byrne dropped out after the second ballot.

Slated for Friday evening was the race for attorney general, an office Minnesota Republicans haven’t won since 1968. Former legislator Doug Wardlow, who’s making his second run for the job after losing to Ellison by less than 4 percentage points in 2018, is general counsel at MyPillow. He worked the crowd with its CEO, Mike Lindell, who’s risen to national prominence for perpetuating the false claim that Trump won the 2020 election.