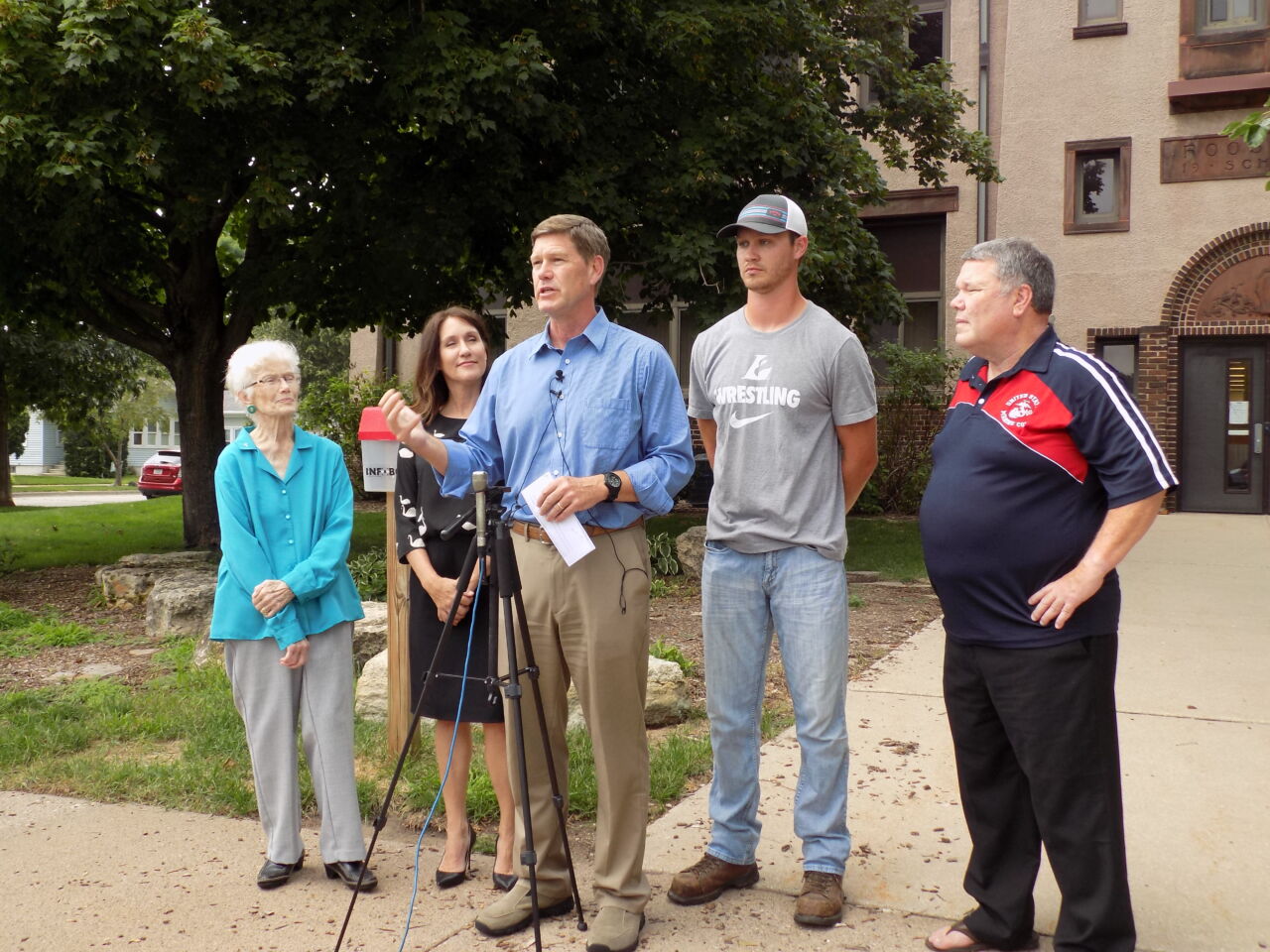 FILE - Ron Kind announcing he would not be seeking a 14th term in Congress in front of his former Roosevelt Elementary School on Tuesday, Aug. 10, 2021.

All five Democratic candidates, listed below, will take part the 6:30-8 p.m. debate at the UW-La Crosse Student Union.

The primary to determine who will represent Democrats in the 3rd Congressional District is Aug. 9. More debates will follow in other parts of the district monthly.

La Crosse County Democratic Party chair William Garcia broke down some of the details Monday on La Crosse Talk PM, including that it will be moderated by UW-La Crosse political science professor, Dr. Anthony Chergosky.

Garcia said there will likely be seven questions, after a 2-minute opening statement from each candidate. The debate will conclude with 90 second closing statements.

With five candidates, however, there was a question on whether this was going to be a debate or a forum.

“It’s a debate, although I understand that with so many candidates the definition becomes a little fuzzy on whether it’s a debate or forum,” Garcia said. “It’s a debate, because, one, if one candidate mentions another candidate by name, the candidate that was mentioned has a chance to rebut, to respond. And typically in a forum, you do not have a chance to do a back and forth like that.”

“We also have a provision where, Anthony Chergosky, our debate moderator for tomorrow, has the option to ask a follow-up question. That means Anthony will have the choice to prod deeper on someone’s answer if warranted. And that’s another feature of kind of a debate, rather than a forum.”

As to some of the questions, Garcia threw out some guesses.

“The economy/inflation/prices, I think something around that,” he said. “I can almost guarantee there’s going to be a question about healthcare. And the only reason I can guarantee that is because I feel like that’s just such an important issue around the country. And I would hazard to guess we’re going to get some kind of Ukraine question. Although I bet we’re going to have a foreign policy question in general.”

Don’t expect a debate on the other side of the aisle. In all likelihood, Republican Derrick Van Orden will be the only candidate.

Garcia pointed out that Van Orden — who lost to Kind by 10,346 votes in 2020 — already has the endorsement of the Republican Party in the 3rd Congressional District — not to mention Donald Trump. So, any candidate looking to run already knows they won’t have any support from the party. Garcia added that Democrats don’t endorse candidates in a primary.

Kind is retiring after 13 terms — 26 years — representing the district. And while the Democratic Party doesn’t endorse candidates, Kind has already endorsed Pfaff.

In that regard, another question from a texter to La Crosse Talk PM asked why have a debate at all, if Kind has already thrown his endorsement to a candidate.

“When you’ve got an open seat like this, I think that both sides benefit from having a really robust debate about who is better for the community,” Garcia said.

“I do not think that indicates a lock,” he continued. “But, even if it was a lock, we should have a debate. Maybe people are wrong. A robust primary is vital to making sure that we get the best candidate for Van Orden run. Ron Kind is still one person and that one person has endorsed, but that is not the same thing as the entire Democratic Party endorsing.”

If you miss the debate, Garcia has interviewed all of the 3rd Congressional District candidates on the Democratic Voice podcast, which can be found online here or by searching “The Democratic Voice” wherever you download podcasts.