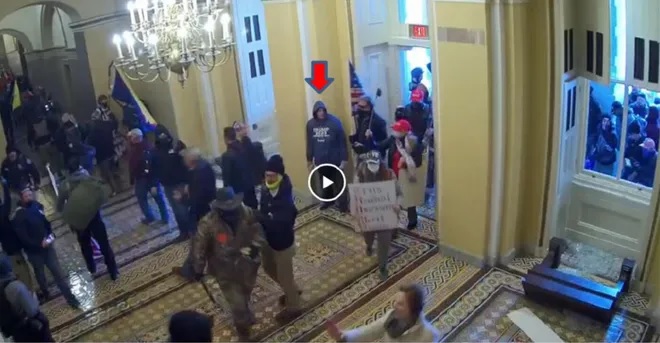 FILE - Kenneth Rader, of Sioux City, was charged with entering the U.S. Capitol in Washington D.C. during the Jan. 6, 2021, insurrection. This security camera footage shows him inside the U.S. Capitol. (PHOTO: FBI)

DES MOINES, Iowa (AP) — A northwest Iowa man was arrested and faces four federal charges in the Jan. 6 2021, attack on the U.S. Capitol after a relative tipped off the FBI.

Court records say an FBI agent arrested Kenneth Rader on Jan. 20 in Sioux City. He is charged with knowingly entering a restricted building, two counts of disorderly and disruptive conduct and demonstrating in a Capitol building.

Omaha, Nebraska-based FBI Agent Michael Banfield said in an affidavit that the agency received a tip on Jan. 8 from a relative that Rader was involved in the breach of the Capitol.

The tipster referred to Rader as “my radicalized family member” and indicated Rader had shared videos of himself on the Capitol grounds and inside the building and has verbally threatened former Vice President Mike Pence.

The FBI obtained access to Rader’s Facebook postings. The account posted a burning American flag on the date Joe Biden was declared the winner of the presidential election and later posted references to the Great Awakening, conspiracy theory terminology used by QAnon followers.

In court documents Banfield says surveillance video shows Rader entered the Capitol through the Senate wing door, stood near the entrance, walked near a broken window, appeared to speak with several unidentified males, then exited through the same door he used to enter. He was inside the building for about three minutes. Photos show him wearing a hooded sweatshirt with “Trump 2020” on the front.