No invasive carp yet, as wildlife experts search Mississippi River at La Crosse this week 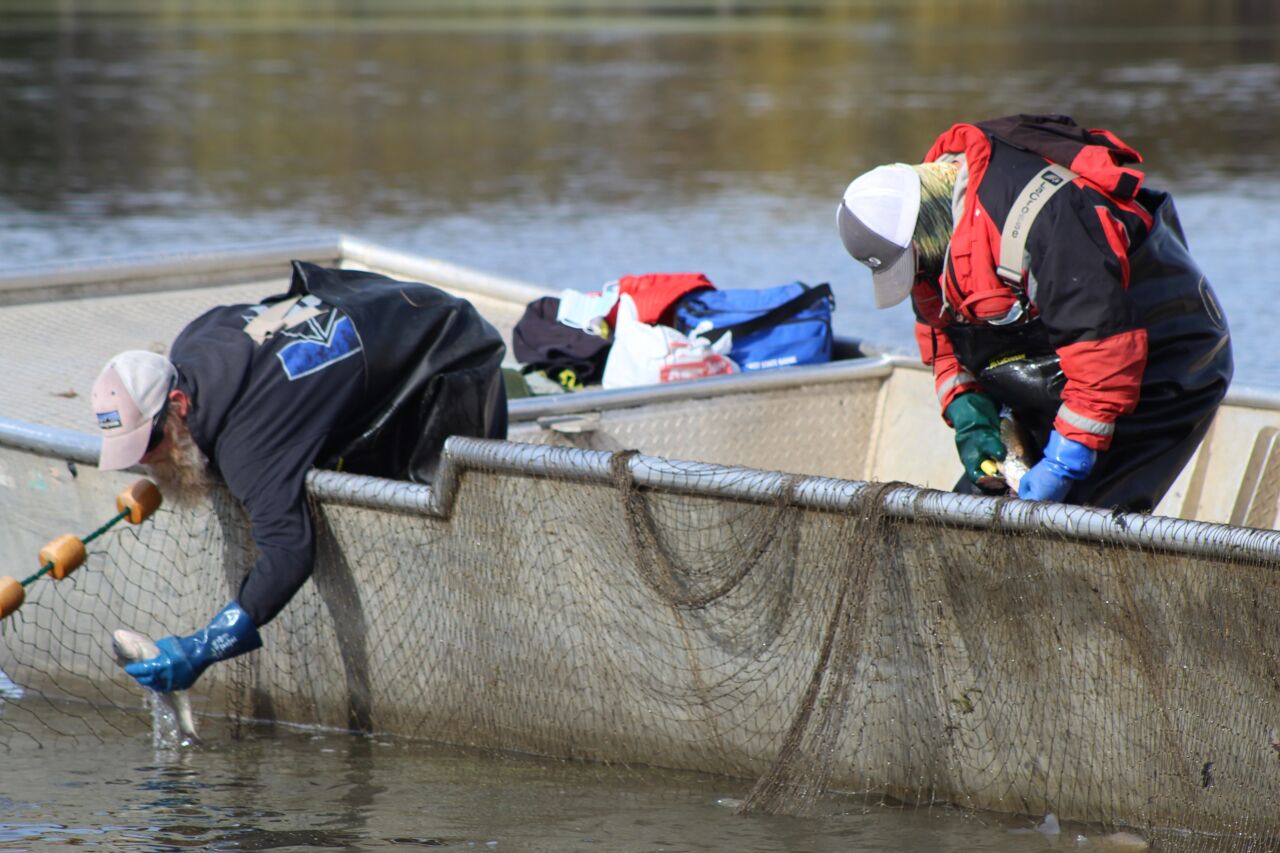 Wildlife experts on the Mississippi River's Pool 8 at La Crosse, bring in the net used to catch invasive carp. None were caught on this round Tuesday, Oct. 27, 2021. (PHOTO: Rick Solem)

Not one fishing pole among them.

Ten boats, about 25 wildlife experts, all working for government agencies with a mission this week to catch invasive carp in the Mississippi River at La Crosse.

No poles. And no carp, either.

“That was good news,” wildlife biologist Randy Hines pointed out Tuesday on La Crosse Talk PM, a few hours after being out on the river.

Hines is nearing in on 30 years working for U.S. Geological Survey (USGS) out of the French Island facility. He is one of those 25 experts on the southside of La Crosse, at Pool 8, looking for invasive carp.

Along with USGS, both the Wisconsin and Minnesota DNRs, and the U.S. Fish and Wildlife Service were on the southside, teamed up to try and stop both Silver and Bighead carp from moving into the area.

It’s a five-day project for the wildlife fanatics, but they don’t get to end it with a Friday fish fry.

“No, unfortunately not,” Hines said, noting the agencies will weigh and measure everything caught. If they get a carp, they’ll do the same but also take out the ear stone and “look at some of their characteristics, about where they originated from and also a little bit more about their specific age.”

Two years ago, commercial fishermen in the area caught 50 of these carp, which set off the alarms at these agencies.

“That was a huge eye-opener for us,” Jordan Weeks, Mississippi Rivers supervisor with the Wisconsin DNR said. “We had no idea that any numbers like that were out here.”

Weeks said there are hundreds of thousands of these carp down south on the Mississippi. They do have a theory as to why they’re seeing them get this far north now, after those fishermen caught 50 two years ago.

“It was the year that we had, basically flood conditions on the Mississippi for the entire summer,” Weeks said. “And all the gates on all the dams were open. So these fish could swim freely from areas further south.”

Last spring the agencies set out in the La Crosse area to see what they could catch, and ended up with 34 invasive carp.

How they do that is basically a giant net from one end of a pool to the next. Then they corral the fish using electro-shock on some boats and speakers on the other, while bringing in the net.

“We know that they respond to boat motors and underwater sounds,” Hines said. “So that complex sound has been something that we’ve focused on for several years now, and have been developing the use of sound for deterrence as well as a driving, herding technique.”

There were hundreds of fish netted on the first try Tuesday.

If they do find these carp Hines said they will “take their ear stones out. And from that ear stone, they could look at some of their characteristics, about where they originated from and also a little bit more about their specific age.”

With invasive carp moving into the area, the problem isn’t that they’re eating native fish. They’re just eating what our native fish tend to eat and, therefore, there’s less food for the rest.

“Stealing food and competing for food at the bottom of the food chains is definitely the biggest competition,” Hines said.

Oh, there’s one other problem, going back to sound and boat motors.

“You might also have some impacts to recreational boaters, if the silver carp established to where they started jumping and hitting boaters and fishermen,” Hines said.