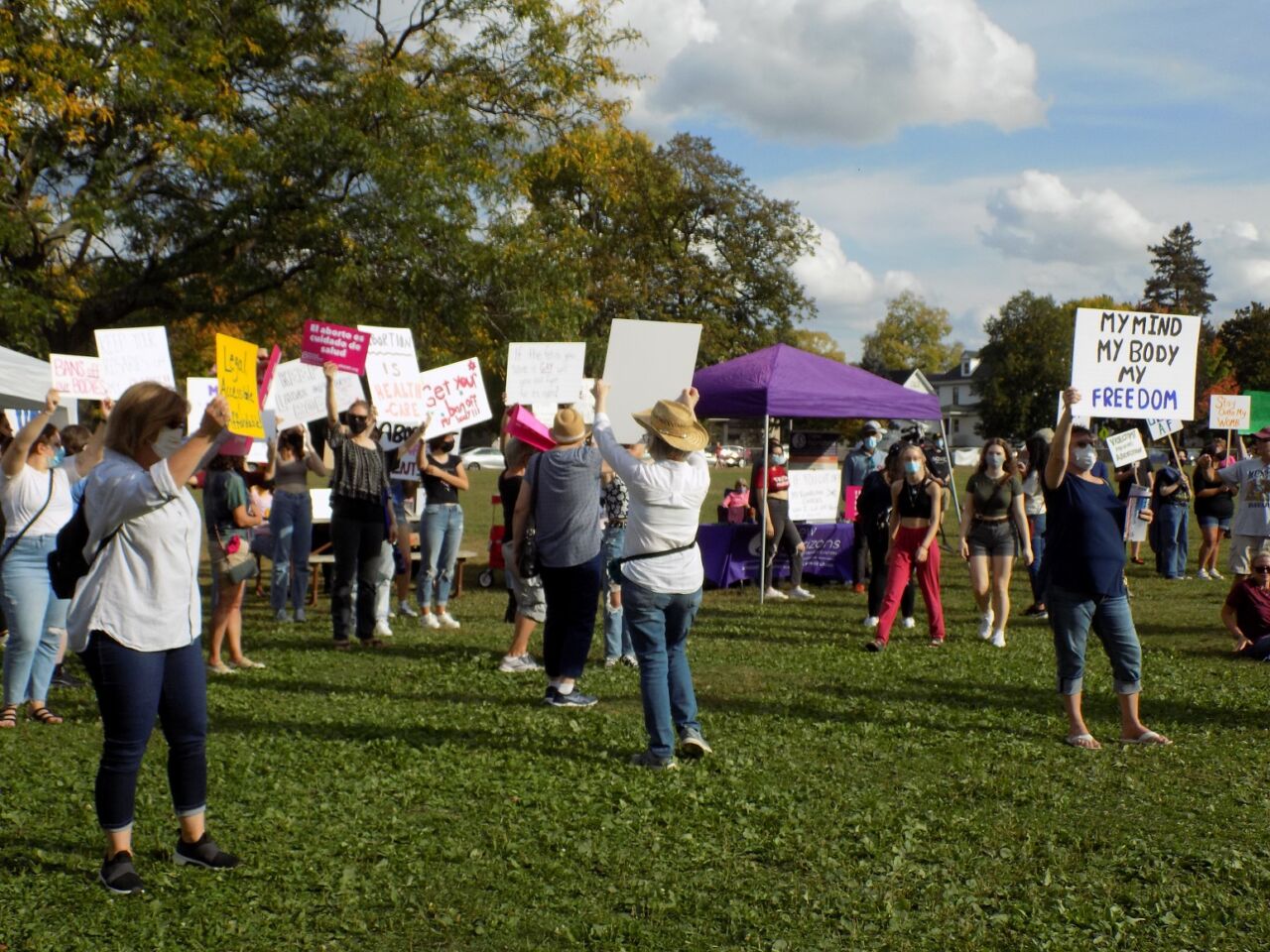 FILE - People gathered at Weigent Park in La Crosse on Oct. 2, 2021, to take part in the Rally for Reproductive Rights that happened nationwide in response to court challenges on the Supreme Court’s Roe vs. Wade ruling of 1973.

A definite threat to a federal law on abortion rights could bring Wisconsin back to the mid-1800s.

Abortion of any type was completely banned in Wisconsin, back in 1849.

It’s a law that stands to this day, but is overruled by the Supreme Court’s Roe vs. Wade decision back in 1973, which established a woman’s right to an abortion nationwide without excessive government restriction.

The Supreme Court is hearing challenges to abortion laws in the next couple months, potentially bringing Wisconsin back to 1849.

“That is the most likely effect if Roe vs. Wade is severely undermined or overturned,” Mike Murray, executive director of Planned Parenthood Advocates of Wisconsin said on the Democratic Voice podcast. “That law is sort of sitting on our statutes like a ticking time bomb.”

Wisconsin state Assembly Rep. Jill Billings of La Crosse thinks the government needs to stay out of a mother’s decision on being a parent.

“My feeling on this, look, I’m a legislator, and I don’t want to insert myself into the examining room,” Billings said Wednesday on La Crosse Talk PM. “I think these decisions are made between a woman and her doctor and if she has a partner or a spiritual advisor that she consults.

“I don’t think that we, as government officials, should be inserting ourselves in that situation with that very, very difficult decision.”

While Wisconsin’s 172-year-old abortion law undermines that to the fullest extent, it is not just “a bit” outdated, it also has hugely punitive.

“It’s a felony to have an abortion or provide an abortion,” Billings said of the 1849 law. “Now, that’s an incredibly harsh law. It doesn’t take in exceptions for rape, incest or the health of the mother.”

Republicans, who control the Legislature in Madison, could do something about the law, or at least listen. It’s been ignored for years.

“That legislation has been introduced a few different times to get that really draconian law off the books, but it hasn’t received a hearing,” Billings said. “It’s very common for us to update statutes.

“In fact, four years ago there was an effort just to go through and kind of update language and other issues with statutes, but yeah, this one is still on the books.”

“That would repeal that law,” he said. “The people that are currently in charge of our state Legislature, in both the Senate and the Assembly, have been absolutely unwilling to even hold a hearing on that.”

Making matters worse, there has been discussion in Wisconsin to adopt a recent Texas abortion ban called “Senate Bill 8” (SB 8) that basically turns the state back into the wild west — more or less deputizing people into bounty hunters to seek out anyone trying to help a woman get an abortion.

“If a person who brings the suit wins, the person who is being sued, has to pay an additional $10,000 of damages directly to the person who sued them,” Murray explained. “That is the incentive for people to basically become bounty hunters — to sue anyone that is trying to help anyone access or provide abortion care.”

A federal judge, however, ordered Thursday to suspend the Texas law, calling it an “offensive deprivation” of a constitutional right by banning most abortions.

Rebecca Kleefisch, the Republican front-runner so far to challenge Wisconsin Gov. Tony Evers in 2022, is touting this Texas bounty hunter system on abortion.

“This is not a test run,” Murray said. “There’s already been news reports of a Wisconsin state legislator who has expressed her intentions of drafting and introducing a Wisconsin version of SB 8 .

“And … former Lt. Gov. (Rebecca) Kleefisch has expressed her support for exactly that type of legislation.”