Raising awareness on drug overdoses, mothers and city leaders tell their stories, in searching for solutions 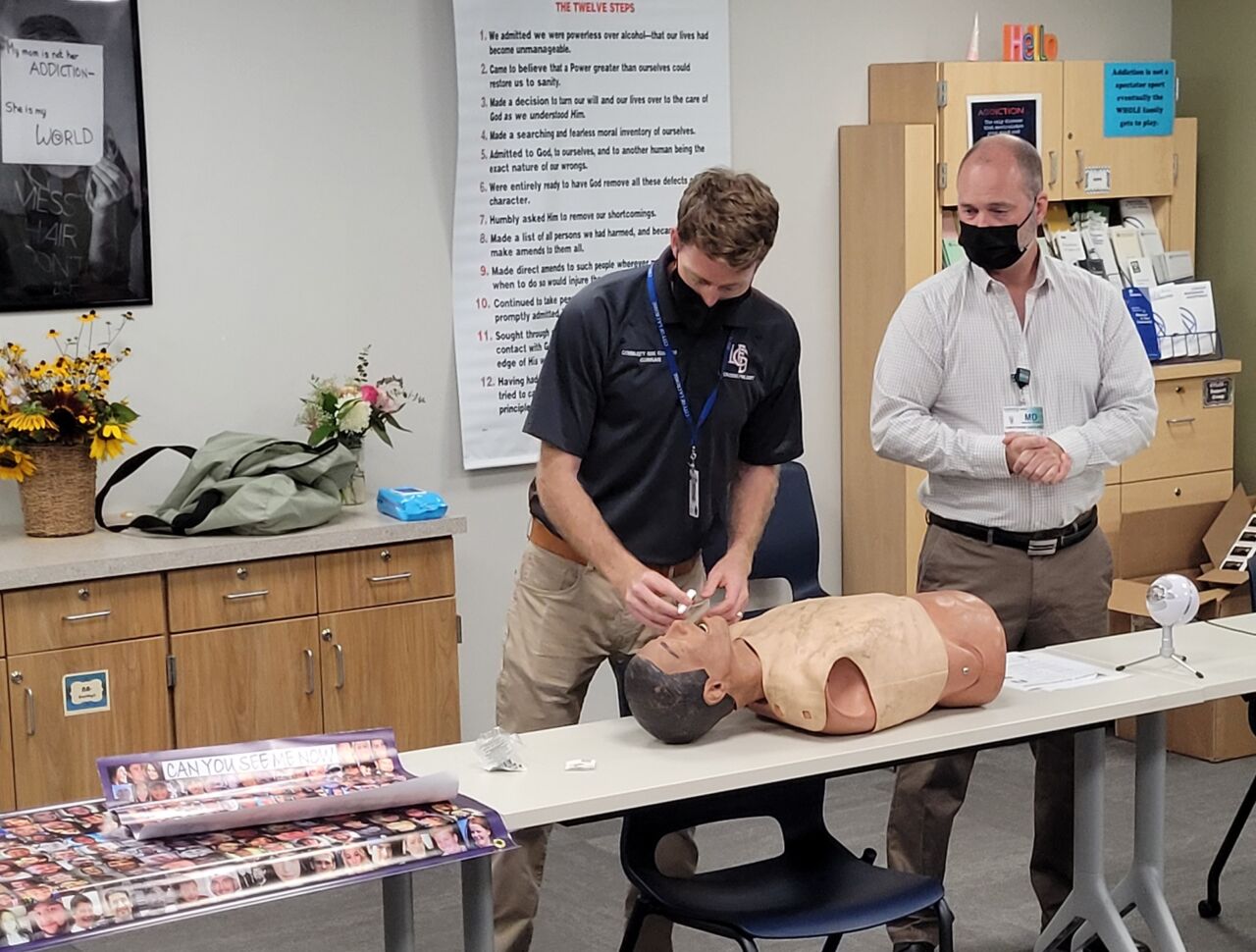 Pat Corran (left), La Crosse's Community Risk Educator and Chris Eberlein, an MD at Gundersen Health System, provide a demonstration on how to use NARCAN during an event at the Coulee Recovery Center on Tuesday, Aug. 31, 2021, (PHOTO: Rick Solem)

Every story is different and nobody should judge.

Those were two messages that came from stories told Tuesday in recognition of International Overdose Awareness Day from the Coulee Recovery Center.

Two mothers — Tari Gullickson and Mishelle Gulley — were brave enough to tell stories of how they lost their adult sons — Keaton Bendel, 25 and Dustin Stockowitz, 30 who was a father of three — to drug overdose.

Mayor Mitch Reynolds also talked about dealing with that trauma, but from a brother’s perspective.

“Their stories as mothers was a story that my mother could tell, as well,” Reynolds said. “My sister died of an overdose almost four years ago. She was 31 at the time and she struggled with mental health issues and a lot of medical issues.

“Every additional story is different and she had multiple addictions but her overdose was from prescription painkillers that she was prescribed to deal with her multiple medical issues.”

Assembly Rep. Jill Billings of La Crosse — with state Sen. Brad Pfaff next to her — spoke of how fentanyl is devastating the statistics when it comes to overdoses — saying 10 of the past 11 deaths were due to fentanyl.

Reynolds and La Crosse County Board chair Monica Kruse read a joint proclamation to observe Aug. 31 as International Overdose Awareness Day. A reading that started off funny enough with Kruse coaching Reynolds how they would read it together, but then turned emotional for the mayor, as he read his portion.

Hancock gave Reynolds a big hug after the proclamation.

For Gullickson, the overdose death of her son was a complete surprise. After battling with drugs, she thought everything was good. Her son was getting ready to marry just before he died. Investigators said drugs were a possibility.

“We were shocked to hear,” she said. “I said, ‘There’s no way. He wasn’t into that stuff anymore.’

It took three months before they got the toxicology reports back and that fentanyl was the cause.

“My son didn’t want to die,” Gullickson said. “He was over the moon happy with his life.”

For Gulley, her son also battled on and off, but appeared to be on his way off drugs after fighting through a detox for five days. A year later, she said, “Drugs pulled him back in.” He died of an overdose in a hotel.

Billings said 2020 saw 93,000 overdose deaths in the U.S. — the most ever, since they began recording the stat in 1968. La Crosse had 40 OD deaths last year — 27 due to fentanyl. The proclamation itself recognized 21 deaths this year in the county, but three had happened since it was written, putting La Crosse on pace to have more deaths in 2021.

Billings added that there are likely 10 unconfirmed deaths that are likely overdoses — but it’s unclear if she meant in the county or statewide.

After they spoke, Pat Corran and Chris Eberlein relayed some information on how NARCAN can save someone who has overdosed.

Corran, the city’s Community Risk Educator and Eberlein, an MD at Gundersen Health System, also provided a demonstration on how to use it.

The two said signs of someone overdosing would be a blue mouth, pinpoint pupils, skin under fingernails turning blue and a dropping pulse.

The key was to spray NARCAN before someone went into cardiac arrest. They also said expired NARCAN was OK to use, it just may not be as effective and that there is no harm from using it, except that it delays other care — like CPR.

Wrapping up the hour-long session was Al Bliss from the La Crosse County Health Department, discussing the Alliance to HEAL Opioid Project and Kelsey Stockwell, a Health Educator for the county, who spoke about the Overdose Fatality Review Team.