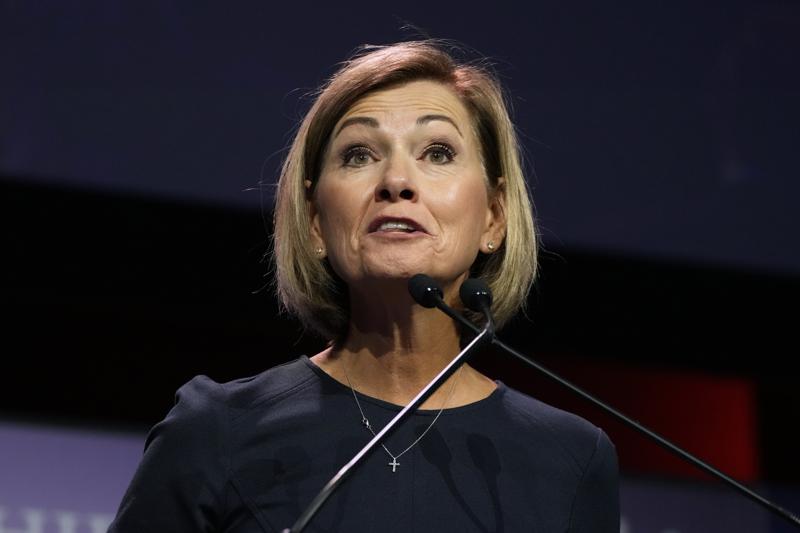 DES MOINES, Iowa (AP) — Worried parents with children too young to be vaccinated called on the the Iowa State Board of Education on Thursday to implore Gov. Kim Reynolds to reverse a state law that bans school mask mandates.

The parents and some teachers sought to change the ban on mask mandates during an online meeting of the board, arguing that with coronavirus infections rising it doesn’t make sense to stop school districts from taking actions to protect children.

Republican lawmakers in May rushed through in the final hours of the legislative session a measure that prohibited counties, cities or school boards from imposing face-covering requirements more strict than those ordered by the state. Reynolds immediately signed the bill into law at a festive news conference where she posed with activists who held signs with anti-mask slogans.

“Please set politics aside and help protect our children’s safety, their learning and their families,” said Jesse Richardson-Jones, a Des Moines mother of two school-age children who asked the board to demand that the governor rescind the mask ban.

Sara Willette of Ames said she’s at high risk of contracting COVID-19 due to an immune system condition and worries about catching the virus from her school-age child.

“The fact that state government stepped in and said we can’t mandate that other students and other teachers are protecting each other and protecting high risk people most importantly, it’s legalized homicide,” Willette said.

Jean Schilling, a member of the Manly-based Central Springs Community School District board, said she was placed in the impossible position last spring of deciding whether to vote to violate the state law and impose a mask requirement in her district or defy local public health officials who were suggesting a mask requirement to stop virus spread in schools. Schilling said she abstained because she could not reconcile the risk of defying local public health directives and could not allow the school district to break the law by defying the governor’s order.

Even if Iowa State Board of Education members, who are appointed by the governor, recommended changes to Iowa’s mask ban, it’s unlikely Reynolds would support the move. The governor and Republican lawmakers have repeatedly rejected calls for mask mandates, saying face coverings are a personal choice.

Asked Thursday about the matter, Reynolds’ spokesman Pat Garrett said, “Anyone can still wear a mask to school. It’s just not required. The governor is proud of the laws she signed, and trusts Iowans to do the right thing on behalf of themselves and their family.”

An additional 10 deaths were reported for a total of 6,193 deaths overall. Hospitalizations are rising as are the number of people in intensive care units.

Centers for Disease Control and Prevention data indicated that 91 of Iowa’s 99 counties have either a high or substantial rate of virus spread, a level at which the federal agency recommends masks be worn inside public spaces, even by vaccinated people.

Scientists have concluded that even vaccinated people can carry enough virus to infect others and since children under 12 cannot yet be vaccinated, they are vulnerable to infection in crowded schools.

A spokeswoman for the Iowa Department of Education did not immediately respond to a message seeking a comment on behalf of the board.