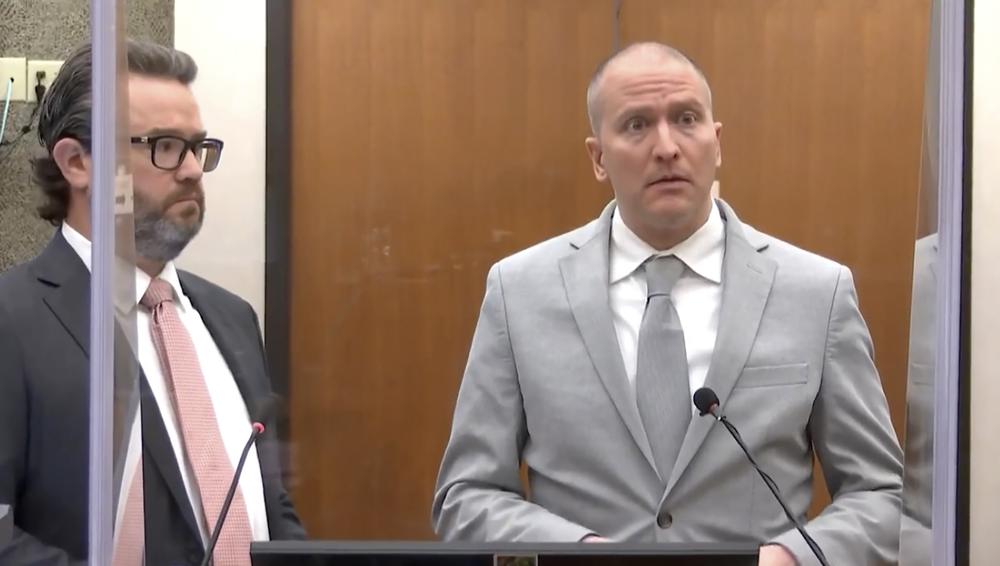 FILE - In this June 25, 2021, file image taken from video, former Minneapolis police Officer Derek Chauvin addresses the court as Hennepin County Judge Peter Cahill presides over Chauvin's sentencing at the Hennepin County Courthouse in Minneapolis. A coalition of news media outlets, including The Associated Press, is asking the judge who oversaw the trial of Chauvin to release the identities of jurors who convicted him in the death of George Floyd. In a court filing Wednesday, Aug. 4, 2021, the coalition said the court's desire to protect jurors from unwanted publicity is not grounds to keep their identities sealed under law. Chauvin was found guilty of murder and manslaughter and was sentenced to 22 1/2 years. (Court TV via AP, Pool, File)

MINNEAPOLIS (AP) — A coalition of news media outlets has asked the judge who oversaw the trial of Derek Chauvin to release the identities of jurors who convicted him in the death of George Floyd, saying there is no known threat to juror safety that would warrant keeping their names sealed.

Chauvin was found guilty of murder and manslaughter in April and was sentenced to 22 1/2 years.

Attorneys for the coalition, which includes The Associated Press, asked Judge Peter Cahill in a court filing Wednesday to immediately unseal the identities of the jurors as well as the prospective juror list, juror profiles, questionnaires and unredacted juror forms. Cahill kept the jurors’ identities secret, but said he would make their names public when he deemed it safe.

Attorney Leita Walker said the media and public have a right to information about a jury. She acknowledged this case was high profile, but said anonymous juries are rare and only allowed in exceptional circumstances, such as in cases involving gangs or organized crime.

Walker wrote that Chauvin’s trial is over “and there is no way that jurors’ fears of intimidation, harassment, or violence can unfairly impact their deliberations.” She also wrote that the coalition knows of no threat to any juror or prospective juror, noting that two jurors and an alternate have already come forward.

She said the court’s desire to protect jurors from unwanted publicity or harassment are not grounds to keep their identities sealed under law.

She said the media don’t minimize the unrest that followed Floyd’s death. However, she said “much has changed” in the months since the jury rendered its verdict “and at this juncture, resistance to releasing their names appears based on little more than a desire to have them left alone. That’s not enough.”

It is not clear when Cahill will rule on the request. Names of jurors and other data such as questionnaires normally become public soon after trials end in Minnesota.

In her filing Wednesday, Walker noted that Chauvin and the three other officers involved in Floyd’s arrest — J. Kueng, Thomas Lane and Tou Thao — are due to be arraigned on federal charges in September, and that Lane, Kueng and Thao face state trial in March. Meanwhile, former Brooklyn Center police officer Kimberly Potter is scheduled to go to trial in December in the fatal shooting of Daunte Wright.

Those trials and others will inevitably divide the public, Walker wrote.

“Thus, the time to build confidence in the judicial system — the time to learn from the Chauvin jurors — is now.,” she wrote.