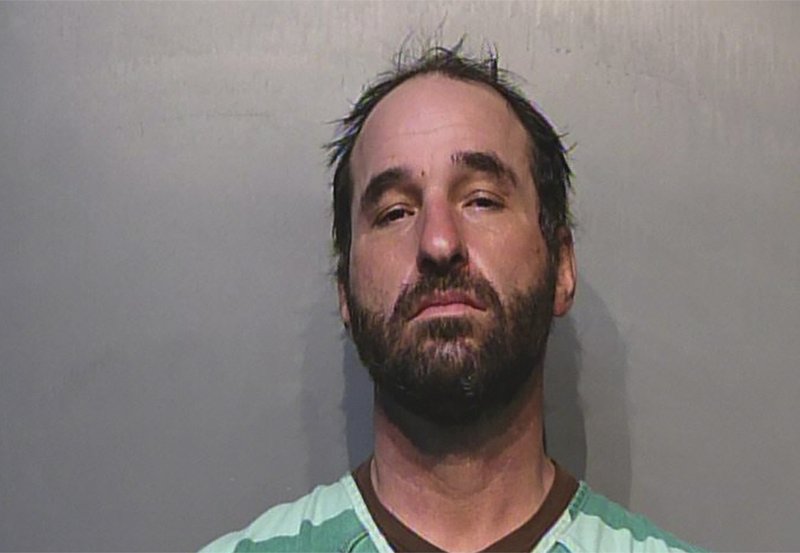 FILE - This photo provided by Polk County, Iowa Jail shows Douglas Jensen. A federal judge agreed on Tuesday, July 13, to free Jensen from jail more than six months after his videotaped confrontation of a police officer inside the U.S. Capitol became one of the most menacing images of the Jan. 6 riots. Jensen, 41, was wearing a T-shirt bearing the letter “Q,” a symbol of the QAnon conspiracy theory, when he joined the mob that approached Capitol police officer Eugene Goodman inside the building and followed the officer up two flights of stairs. (Polk County Jail via AP File)

A federal judge agreed on Tuesday to free an Iowa man from jail more than six months after his videotaped confrontation of a police officer inside the U.S. Capitol became one of the most menacing images of the Jan. 6 riots.

Douglas Jensen, 41, was wearing a T-shirt bearing the letter “Q,” a symbol of the QAnon conspiracy theory, when he joined the mob that approached Capitol police officer Eugene Goodman inside the building and followed the officer up two flights of stairs.

U.S. District Judge Timothy Kelly said deciding whether to free Jensen from jail pending trial was a “close case,” but he ultimately agreed to release the Des Moines resident on house arrest with electronic location monitoring. The judge also barred him from accessing the internet on any electronic devices.

The judge said Jensen’s actions during his confrontation of Goodman were “deeply concerning and quite serious.” But he noted that Jensen is not accused of toppling any barricades, damaging any property or fighting with anybody at the Capitol.

“That said, he clearly disobeyed Officer Goodman and other officers, and he did position himself near the front of a mob as he ran up the stairs toward Officer Goodman,” the judge said. ”That may be some leadership, but only in the narrowest sense.”

Kelly noted that a video captured Jensen referring to the Capitol building as the White House. The judge said he didn’t believe that Jensen could have coordinated with others or planned an attack in advance “when he had no basic understanding of where he even was that day.”

Prosecutors said Jensen is a self-proclaimed “digital soldier” and “religious” adherent of QAnon, the conspiracy theory that has centered on the baseless belief that former President Donald Trump was secretly waging a campaign against a Satan-worshipping, child sex trafficking cabal of “deep state” enemies, Hollywood elites and Democratic foes.

Jensen traveled to Washington because he was “all about a revolution” and succeeded in his mission to become the “poster boy” for the events at the Capitol that day, prosecutors wrote in court papers. They argued that he poses a danger to the public and must remain jailed.

Defense attorney Christopher Davis said his client went to the Capitol to observe what QAnon promoters have prophesized as “The Storm,” the day when Trump’s enemies would be rounded up and executed.

“He was in front of everyone for the now disclosed silly reason to get Q recognized for “The Storm” that was about to take place,” Davis wrote in a court filing.

Jensen’s lawyer said his client “became a victim of numerous conspiracy theories that were being fed to him over the internet by a number of very clever people, who were uniquely equipped with slight, if any, moral or social consciousness.”

“Six months later, languishing in a DC Jail cell, locked down most of the time, he feels deceived, recognizing that he bought into a pack of lies,” Davis wrote.

Davis said he tried to book a plane ticket for Jensen but wasn’t able to, leading him to believe that his client is on a no-fly list.

Few of the more than 500 people charged in the Capitol riot remain locked up while they fight the charges.

An appeals court ruling in March that led to the release of a mother and son charged in the riot set standards for how judges should weigh whether to keep Jan. 6 defendants locked up awaiting trial.

The appeals court found that the judge who ordered Eric Munchel and his mother Lisa Eisenhart detained failed to show how they could be a threat to the community, noting that they didn’t assault anyone or destroy anything on Jan. 6.

Judges have since cited that ruling in several decisions releasing defendants.

But the appeals court also said last week that people could still be found to be a danger to the public and kept in jail even if they didn’t commit violence on Jan. 6.

That came in an opinion upholding the pretrial detention of an Army reservist whose co-workers told authorities was a known Nazi sympathizer who wore a Hitler mustache. The judge who ordered Timothy Hale-Cusanelli locked up pointed to his violent rhetoric and found him to be a threat to a government informant.