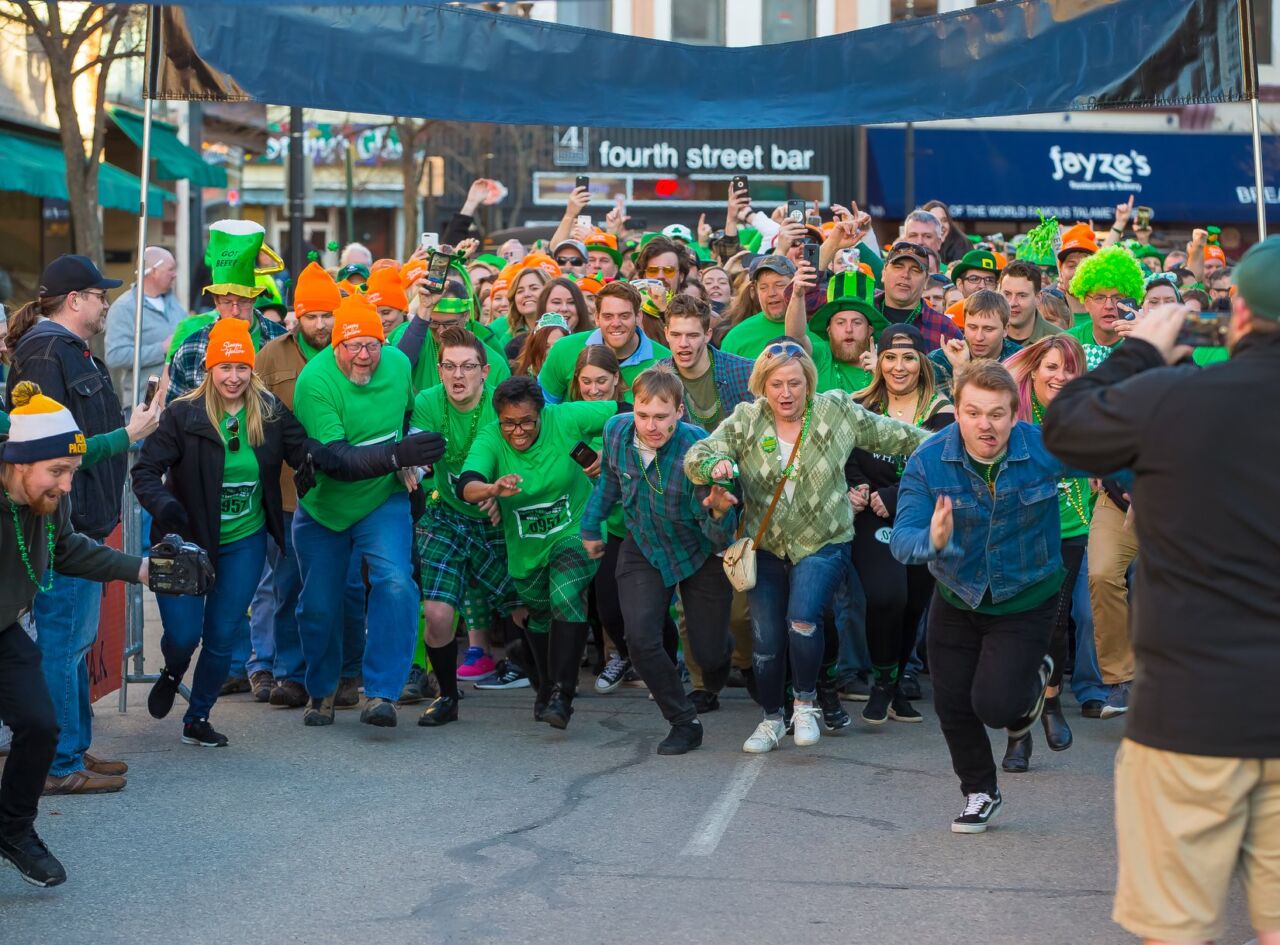 FILE - Participants take off at the start of the 2019 Paddy's Day .01k down Pearl Street in La Crosse. The 2020 event was called off on the day the health department had to shut down group events. This year's event will take place at Riverside Park. (PHOTO: Bob Good Photogrpahy Studios)

It’s pretty much the perfect race, one year later, from the start of the pandemic.

We’ve all been on our butts, trying to stay safe, stay home. With that, we might be a bit out of shape — or a lot more, if you’re me.

They’ve labeled it, ‘The One Down by the River,” being the event from 4-6 p.m. Saturday will be held at Riverside Park this year.

“We have had some teams do it as a relay — handing a baton off to each other every eight feet,” she said. “We’ve had people do it on hippity-hops. We had a guy do it as the worm, so he wormed his whole way through the race. So, yeah, there has been some creativity over the years.”

This is the 16th year of the race to benefit the Hunger Task Force of La Crosse — the only food bank between Madison and Rochester that serves 118 food pantries throughout the area.

Last year, however, the event had to shut down on Day 1 of “Pandemic, La Crosse.”

“Literally, last year, it was the day of the event when the city had to shut down, right?” Taylor said. “So, we weren’t able to hold the event. We still sold some shirts and people donated, straight up, to the Hunger Task Force, knowing the history of the event.

“This year we’re doing it a little different with the blessing of the health department.”

Along with it being at Riverside Park, instead of down Pearl Street, there will also be a staggered start, so those who register together or are family members will run the 32-foot race together.

“And we’ll do some funny photos for them and we can even do their times, if they’d like,” Taylor said.

Runners can show up any time between 4-6 p.m. to get that photo-op.

While this event comes at a perfect time of the year, is the perfect distance for everyone coming out of a pandemic, it’s also — and perhaps most importantly — held for the perfect cause in this imperfect situation.

Hunger Task Force executive director Shelly Fortner has been there for all 16 years of the event, which has brought in well over $50,000 to her group.

“It’s the most ridiculous, fun thing ever,” Fortner said. “And you had to be at the first one to actually, just, believe it.

“I see an end to all of this massive struggling, and people starting to get back to normal but there’s always going to be people in need in our community, and we’re just glad to be able to be here to help,” Fortner added. “Events like the .01k, as fun and ridiculous as this event is, are so important to what it is that we’re doing.”

Fortner will have a busy weekend on her hands, too. On Friday, she’ll be helping run what’s called Food Distribution Days at the Salvation Army of La Crosse warehouse. That event is just as it sounds, a chance for those in need to get boxed goods.

It comes a year after Fortner, the Rotary groups and the La Crosse County Health Department spearheaded an effort called Food Drive Fridays — a seven-week donation run that brought in nearly 70,000 pounds of goods and raised over $250,000 for the food bank.