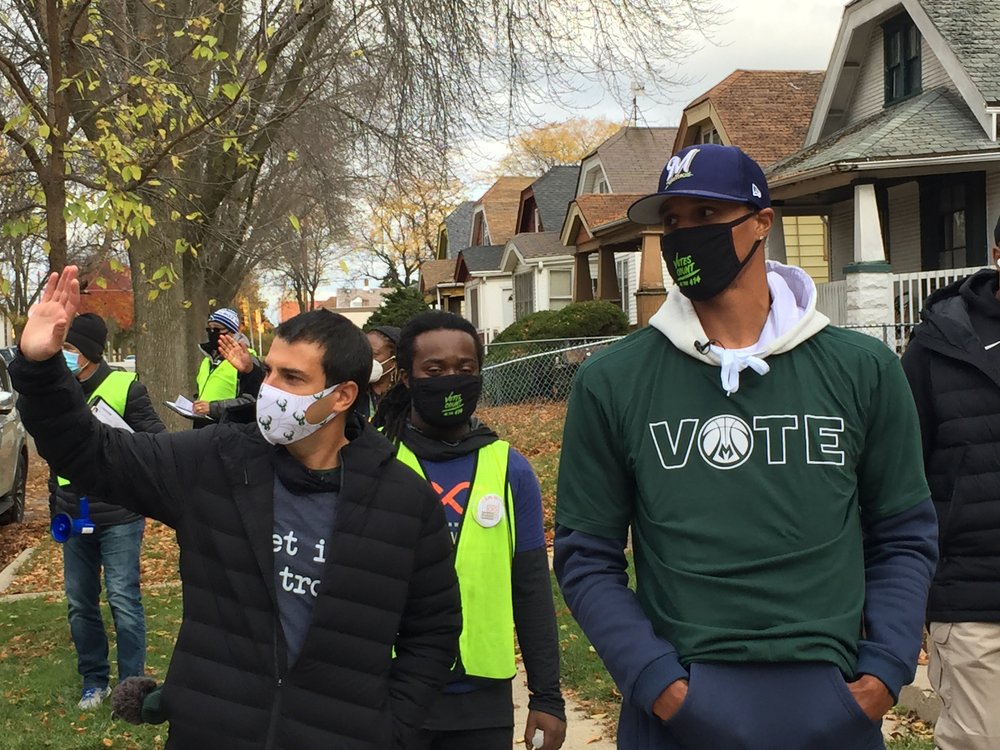 MILWAUKEE (AP) — Milwaukee Bucks guard George Hill said the importance of Wisconsin in the upcoming election caused him to fly back here this weekend to assist in a local voting drive.

Hill, who lives in San Antonio, worked alongside about 50 volunteers from the Milwaukee-based organization Common Ground walking through local neighborhoods Saturday to encourage people to vote early.

Hill wore a shirt with the message “VOTE” and a Bucks logo plus a mask with the message “Votes Count In the 414” as he walked through several blocks in various neighborhoods with a group that included Bucks senior vice president Alex Lasry. Milwaukee’s area code is 414.

They occasionally would greet residents at their homes or stop people walking or driving by them. Hill would ask whether they’d voted and would remind them of the importance of voting.

“I’m not here to say vote for one side or the other,” Hill said. “But I’m here to say use your voice and vote. Our ancestors, our fathers and things like that fought for this right. You should take advantage of it and get out and vote and use it.”

Hill made this visit nearly two months after he and his Bucks teammates opted against playing a first-round playoff game with the Orlando Magic to protest the shooting by police in Kenosha, Wisconsin, of Jacob Blake, a Black man. The Bucks’ decision led to an NBA-wide postponement of playoff games.

Now that the season is complete and Hill is out of the playoff bubble at Walt Disney World, he has continued doing community outreach through youth mentorship programs at his home in Texas as well as his work Saturday in Milwaukee.

“You always try to figure out different ways you can strike change and be accounted for,” Hill said. “When I first got to the NBA, Coach Pop (Gregg Popovich) told me one thing that always stuck with me, is how do you put your whole fingerprints on the world and leave your mark.

“Sometimes you have to stand up for what’s right, and sometimes that may be ruffling feathers and may be frowned upon by everyone else, but at the end of the day in your heart, knowing you’re on the right side of history and knowing that you did the right thing, good or bad, you have to live with that.”

Hill and Common Ground were walking through Milwaukee neighborhoods encouraging voting on the same day that President Donald Trump was scheduled to visit the Milwaukee suburb of Waukesha, an indication of Wisconsin’s importance in the upcoming election.

Trump won Wisconsin’s 10 electoral votes in 2016 after beating Hillary Clinton by under 23,000 votes out of nearly 3 million ballots cast.