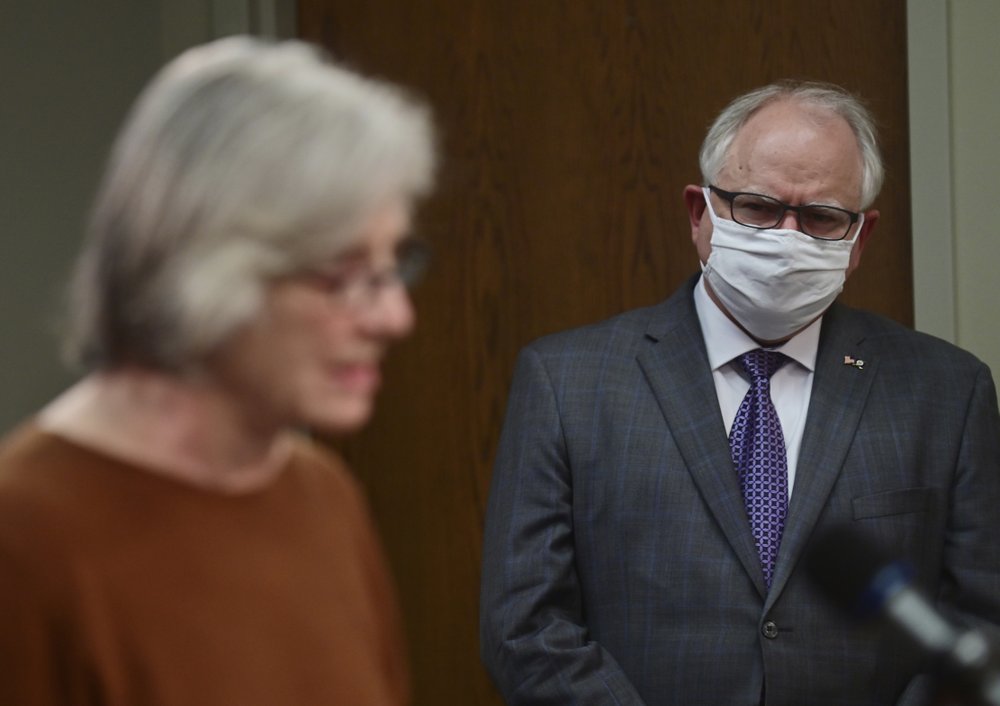 MINNEAPOLIS (AP) — Minnesota hospitals asked Gov. Tim Walz to order people throughout the state to wear masks in public to slow the spread of the coronavirus — a step the governor said he has been considering.

In a letter released Friday, the Minnesota Hospital Association urged the governor to act quickly to protect the state from the type of surges in other states, many of which aggressively lifted virus restrictions to reopen their economies despite warnings from health officials about doing so too soon. Although COVID-19 hospitalizations in Minnesota have been declining, the group pointed out that the state’s rates of positive tests and new confirmed cases are rising again.

“We have a narrow window of time to slow the spread of the virus, so we are asking you to mandate the wearing of face masks statewide as soon as possible,” wrote Dr. Rahul Koranne, the association’s president and CEO.

Walz told Minnesota Public Radio on Friday that he still hadn’t made a decision. Although the Democratic governor said he would be willing to order a mandate “at some point in time,” he said he’d like to get Republican support rather than impose it unilaterally. He said a mask requirement could make it possible to further open up businesses.

The Minnesota Department of Health on Friday reported 669 new confirmed COVID-19 cases seven new deaths from the disease. That raised the state’s death toll to 1,533. The number of people hospitalized in the state with the disease, 252, remained near its lowest level since mid-April, including 110 patients who were in intensive care.

The state’s positivity rate, an important measure of how quickly the virus is spreading, rose from 3.5% two weeks ago to 4.2%, according to data from The COVID Tracking Project.

Walz said that increase worries him and suggested again that his trigger for ordering a masks to be worn statewide might be 5%.

“We’re watching the numbers and I candidly am nervous,” he said. “The good news is, is that we haven’t crept up as fast as we’ve seen elsewhere. This can get out of hand really fast.”

The governor, a former teacher, also told MPR that he’s still considering whether to reopen classrooms to students or whether to continue relying on virtual learning. He previously said he would decide by July 27.

“I am very excited to see people understand the importance of being in public schools and that social aspect, the mental health and all that,” he said. ”The key here is it’s not that we want to get them back in. It’s can we do it safely?”

Health department officials said at a briefing Friday that Minnesota may need to dial back reopening efforts on bars, restaurants and other public gathering spaces if current case trends accelerate. And Kris Ehresmann, the state’s infectious disease director, warned that it’s “extremely likely” that Minnesota’s relatively stable counts of hospitalizations and ICU cases will resume an upward climb, perhaps as soon as next week.

State investigators have received some 120 complaints since Monday from concerned residents reporting violations of the current orders around gathering in indoor social spaces, particularly bars and restaurants, Health Commissioner Jan Malcolm said. The complaints include staff not wearing masks, not enough social distancing and too many people at a site.