The other "Jo," wants your 2020 vote, if you're fed up with the two-party system or if you're not 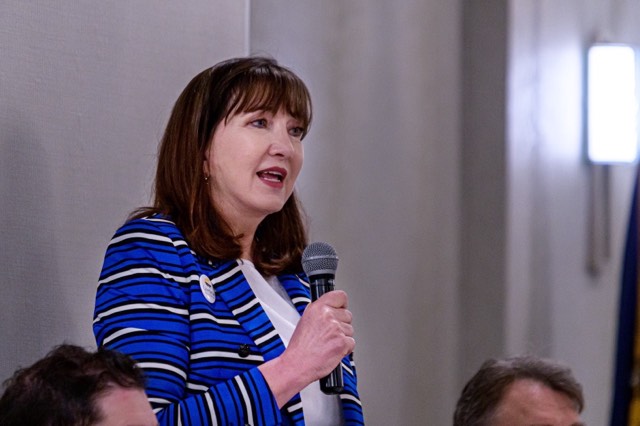 Two white guys in their 70s. That’s the best the two-party system has offered to represent the U.S.

Dr. Joanne Jorgensen believes this is the best time to be a third-party candidate. And the best candidate might just be a woman not in her 70s, which she is both.

“Dr. Jo” is the Libertarian Party’s 2020 presidential candidate. And she says, for those who think voting third-party is, essentially, like voting for Donald Trump, they’re wrong.

“History shows that we typically take from both sides equally,” Jorgensen said on La Crosse Talk PM. “However, we do take more votes from independents or people who haven’t voted. That’s who we take most of our votes from. People are so fed up.”

She added that’s pretty much how we got Trump in the first place.

“It was a bunch of people who said, ‘We’re fed up with the professional politicians, we want an outsider,’ but then we get Trump, who promises us smaller government, but gives us bigger government,” Jorgensen said. “He was supposed to get rid of the deficit, but it’s just getting bigger.”

Part of Jorgensen’s platform is, of course, ending government debt, but also to get the U.S. out of foreign wars and transition the world — not just the U.S. — away from coal and oil and toward nuclear power.

On that note, Jorgensen said that the new tech surrounding nuclear is what environmentalists should be pushing over green energy options, like wind and solar.

“If they were efficient, if they were a good option, then people would have invested their own money in it to make a killing,” Jorgensen said. “If there were profits to be made, you know that the greedy capitalist would have done it, right? And I say that facetiously.

“That’s the good part of the free-market system, is that the dollars go to the good market choices.”

Green energy, however, at its most efficient, might not make capitalists any money, however, unless they figured out a way to charge to use the sun or command the wind.

Jorgensen also touched on income inequality, which she said there’s not a problem at the top.

“Whenever we have progress,” she said, “whenever we have technology — and people working to better their lives — we have a wealth gap, because there are opportunities that some people make that others, either choose not to or whatever.”

Jorgensen was very much against anything having to do with a wealth tax, as that word, “tax,” is not anything Libertarians stand for. The problems, to her, with poverty has been the government’s fault.

Her solutions to end poverty hover around eliminating government policies and regulations that, she says, drive up costs for anything from housing to health care to new businesses.

Jorgensen lays out some of the issues on her campaign website — taxes, health care, social security, among others — but notes that they are just brief overviews.