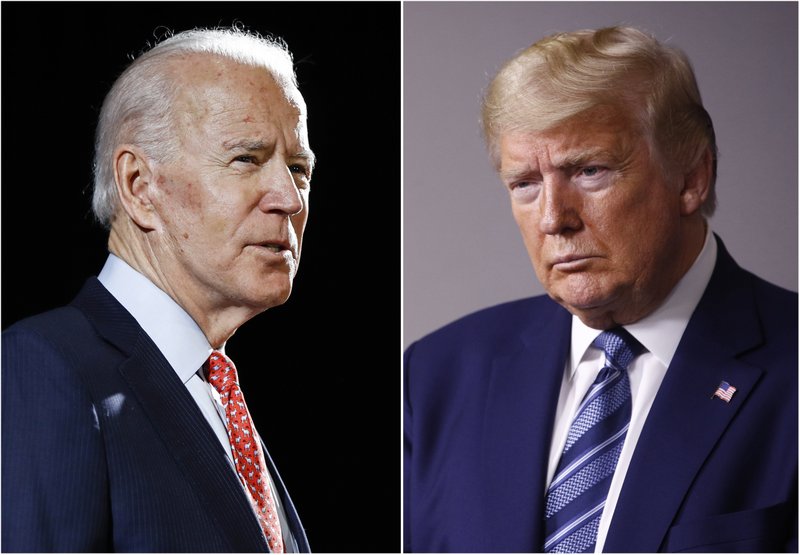 The stage is set for November.

Biden likely won’t secure the number of delegates needed to clinch the nomination until June. But without any Democratic rivals left, a general election campaign that will almost certainly be the most expensive and among the nastiest in U.S. history is underway.

“It won’t be easy. Nobody’s confused about that. But we are ready for the general election. We are ready for our standard-bearer,” Democratic National Committee Chairman Tom Perez said. “I’m confident because Joe Biden’s values reflect the values of the majority of the American people that we can win.”

In Biden and Trump, voters will choose between two white septuagenarians with dramatically different prescriptions for health care, climate change, foreign policy and leadership in an era of extreme partisanship.

At 77, Biden becomes the oldest major party presidential nominee in modern history. And having spent most of his life as an elected official in Washington, no nominee has had more experience in government.

But in Trump, Biden is up against an adversary the likes of which he has never faced in his decadeslong political career. The 73-year-old Republican president opens with a massive cash advantage and a well-established willingness to win at any cost.

Trump’s campaign is moving forward with a multipronged attack that mixes legitimate criticism with baseless charges and, in some cases, outright conspiracy theories. It’s similar to the unconventional playbook Trump used against Hillary Clinton four years ago with unexpectedly devastating success.

Trump campaign spokesman Tim Murtaugh said Biden will be portrayed as too liberal for most Americans, weighed down by questions about his son’s overseas business dealings and about questionable mental acuity at his age. Brad Parscale, Trump’s campaign manager, predicted Trump would “destroy” Biden, whom the president and his allies have nicknamed “Sleepy Joe.”

Trump’s team also believes he can win over disaffected Sanders supporters who see Biden as a consummate insider. Shortly after Sanders’ announcement Wednesday, the president charged without evidence that Democratic leaders were plotting against Sanders.

The Republican National Committee has already assembled an extensive research book on Biden. The GOP has devoted 10 researchers to Biden and sent hundreds of Biden-related freedom of information and public records requests to gather additional damaging material.

efore Biden can shift his entire focus to Trump, the former vice president is tasked with winning over Sanders’ skeptical far-left supporters, who have trashed Biden’s record on trade, criminal justice, corporate America and foreign policy. The party’s most progressive wing also fears that Biden’s policies on health care and the environment, among others, don’t go far enough.

For example, Biden supports universal health care, but unlike Sanders, he would preserve the private insurance system and offer Americans a government-backed “public option” instead of Sanders’ signature “Medicare for All.”

Biden advisers note that he had already begun reaching out to Sanders’ aligned progressive organizations, including those focused on young people like the Sunrise Movement and the March For Our Lives.

Sanders suggested that any full-throated endorsement of Biden would come with strings attached. “We are talking to Joe, and we are talking to his team about how we can work together,” he told CBS “Late Show” host Stephen Colbert.

In a sign of what he hopes will come from those talks, Sanders said, “I hope to be able to work with Joe to move him in a more progressive direction.”

Trump tried to raise suspicion about why Obama had yet to endorse Biden, saying: “When is it going to happen? Why isn’t he? He knows something that you don’t know.” Former presidents typically don’t interject themselves in the primary process, and Obama had long maintained he wouldn’t get involved until a nominee had been selected.

Biden’s status as the presumptive nominee affords him the freedom to move forward more openly with selecting a running mate. He’s already started vetting potential vice presidents, but he had to tread gently with Sanders still in the race.

The campaign’s general counsel, Dana Remus, and an outside adviser, Bob Bauer, are leading the early weeks of the search process. Bauer served as White House counsel to Obama and is married to Anita Dunn, Biden’s top campaign strategist.

Biden acknowledged during a virtual fundraiser Wednesday that his team has discussed a faster timeline for announcing his running mate, which traditionally comes on the eve of the national convention. But, he added, “It’s going to take a while to get through the usual vetting.”

Meanwhile, both candidates are staring down the coronavirus pandemic, which has turned 2020 campaign logistics on their head. With peak infection rates still several weeks away for many parts of the country, the outbreak and related economic devastation will play a major role in shaping voter attitudes and campaign logistics.

For now, Biden and Trump are effectively stuck at home like much of America.

Biden’s team suggest that his empathy and experience are right for the moment, yet he has struggled to be heard from the makeshift television studio in the basement of his Delaware home. The campaign has committed to at least one virtual event each day, while Trump has starred in widely viewed daily White House briefings about the coronavirus outbreak.

Despite the challenges, Biden will move into the fall with a broad coalition comprised of working-class white people, older African Americans and even disaffected Republicans who have been alienated by Trump’s GOP. The Lincoln Project, a collection of former Republicans, formally endorsed Biden shortly after Sanders’ announcement.

“As America contends with unprecedented loss, we need a leader who can steady our ship of state, bind up our common wounds, and lead us into our next national chapter,” said group co-founder Reed Galen. “Joe Biden has the humanity, empathy and steadiness we need in a national leader.”