Should Washington stop building roads? Some think so 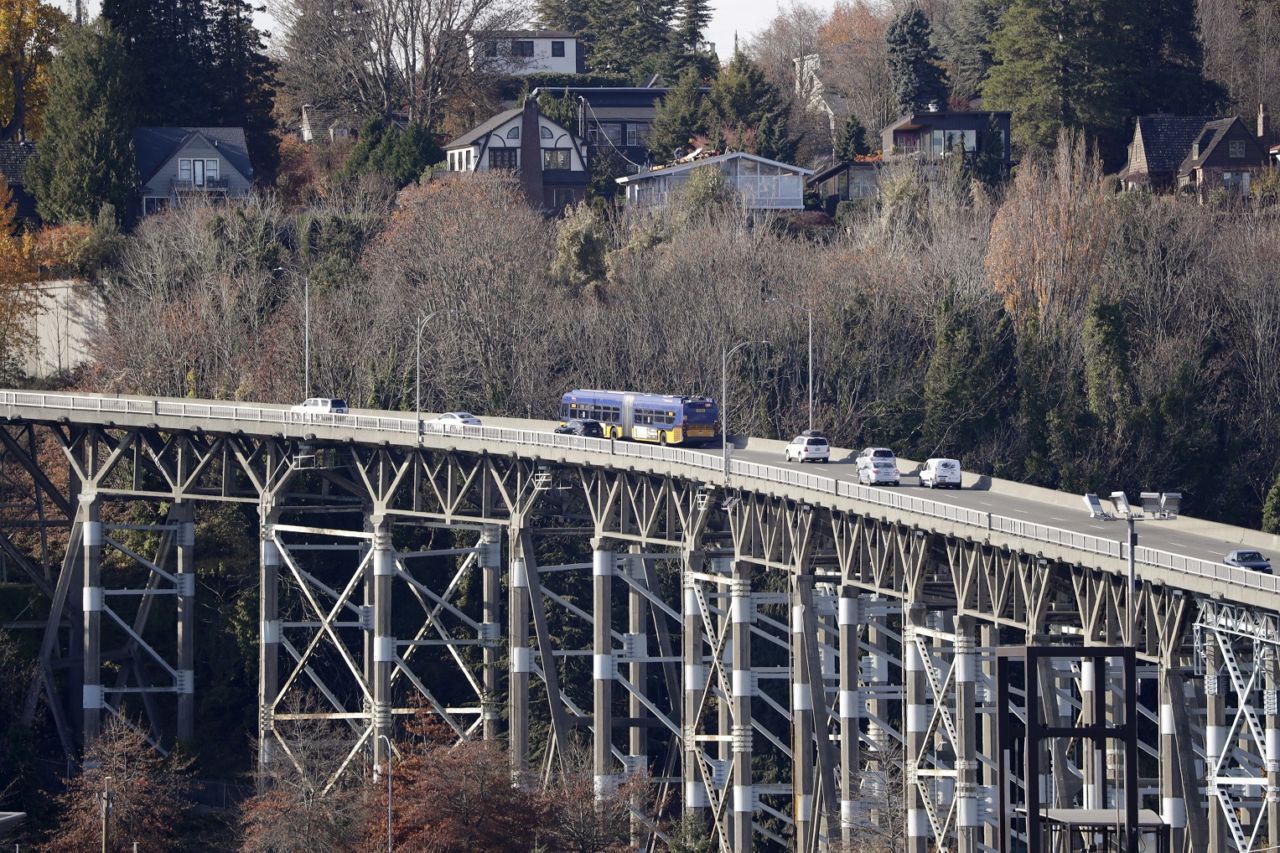 SEATTLE (AP) — Washington state legislators are considering whether to remove “congestion relief” and “improved freight mobility” from their transportation goals, a departure from the American passion to expand highways.

“Instead of continuing to build our roads where individual members come up with projects because there’s a congestion in their district, what we need to be doing is we need to be looking at this more holistically,” sponsor Rep. Sharon Shewmake, D-Bellingham, testified in committee. “Accessibility is really what we want to get at.”

Her bill defines accessibility as “affordable access to the places and goods Washington residents, organizations and businesses need to live, work, study, play and pray,” by all modes of transportation. A Senate version of the bill was introduced by Rebecca Saldaña, D-Seattle.

“We can’t afford to minimize the importance of freight mobility for our roadways,” Washington Trucking Association Executive Vice President Sheri Call told a Senate committee recently. “Washington must continue to deliver projects that provide quality of life benefits for all users of the highways in Washington, and keep our economy moving forward.”

The state borrows so heavily for big projects such as the Highway 99 tunnel, Highway 520 floating bridge and the widening of I-90 at Snoqualmie Pass East, that bond debt is forecast to consume three-quarters of gasoline taxes by 2028.

The declining condition of state highways is “a glide path to failure,” Millar told lawmakers in mid-January.

“That is going to result in some kind of intervention by the federal government,” Millar continued. “We have 4,000 lane miles of pavement that are due for preservation this year, we have another 3,600 miles that are past due, and 1,600 miles in the system that are rated as poor. Our budget currently provides for repaving 750 lane miles a year.”

Only four of 100 steel bridges are being repainted on time, he said.

A few other states are questioning whether they should keep adding freeways.

Texas Gov. Greg Abbott declared in January that his state is probably experiencing “its last major build-out of roads we’ll have in the state of Texas, even considering the fact that Texas is the fastest-growing state in America,” D Magazine reported.

The Pennsylvania DOT adopted what it called a holistic view in 2017, adding safety and environmental criteria.

Millar told a highway-officials convention in Spokane in 2018, “simply put, we cannot build our way out of congestion.”

As of yet, no state has frozen or canceled highway construction for the sake of reducing car dependency or greenhouse gases, according to Patrick McKenna, Missouri Department of Transportation director and president of the American Association of State Highway and Transportation Officials.

Environmental aims do limit highways in some communities, McKenna said, but money is a greater constraint. Missouri voters, for instance, have rejected measures to boost their 17-cent gas tax.

“At the practical level, the ability to fund these things is constricted,” he said. “We’ve had multiple decades of a public unwillingness to maintain the system in its current state, never mind expansions.”

The Washington state Legislature already committed $3 billion this biennium to highway improvements. Contractors are widening I-5 through Joint Base Lewis-McChord, and will toll lanes to I-405 between Bellevue and Renton. Work resumes this spring to complete the North Spokane Freeway, proposed in the 1940s.

“We are not against adding capacity. There are places where adding capacity makes perfectly good sense,” Millar said in an interview last week. He praised the Puget Sound Gateway program that will extend both Highway 509 in SeaTac and freight-laden Highway 167 from Tacoma to the Green River Valley.

“WSDOT is fundamentally a road and bridge agency and should not veer into areas of public health or social engineering, while rejecting its responsibility for improving mobility for all Washingtonians,” she wrote last week.

WSDOT would write metrics for each goal, and consult with the departments of health, ecology and commerce to evaluate projects. Some standards are subjective, like “alignment with land-use goals that bring the things people need closer together.”

But other provisions would add teeth to numeric standards already in state law: to reduce statewide carbon emissions by 25%by 2030 from 1990 levels, and redice vehicle miles traveled 30% by 2035 from 2008 levels. The bill revives WSDOT’s Target Zero pledge to eliminate traffic deaths by 2030.

Washington is currently off track to achieve these three standards.

“More than 10 people a week die on our highways,” Millar emphasized.

Shewmake told Young at a hearing, “I would argue that your constituents probably care about accessibility as their number one goal in looking at a transportation network.”

“No,” Young replied. “My constituents fundamentally care about being able to afford the tolls on the (Narrows) bridge and be able to make their payments, to put gas in their cars, so they can feed their families.”

In the Senate committee hearing, ranking member Curtis King, R-Yakima, declared, “To me, we are introducing things that are totally not transportation.”

King speculated that an environmental-justice goal could hinder repaving to preserve I-82, from Union Gap to Yakima, on grounds that Latino residents nearby have been exposed to exhaust particulate, a health issue flagged by bill proponents.

Money for the new goals might be harder to find.

The state Constitution requires state gasoline taxes be spent on state and local roads. The more flexible car-tab taxes, which can be spent on transit, passenger rail, walking and bicycling, will be slashed if courts uphold Tim Eyman’s Initiative 976.