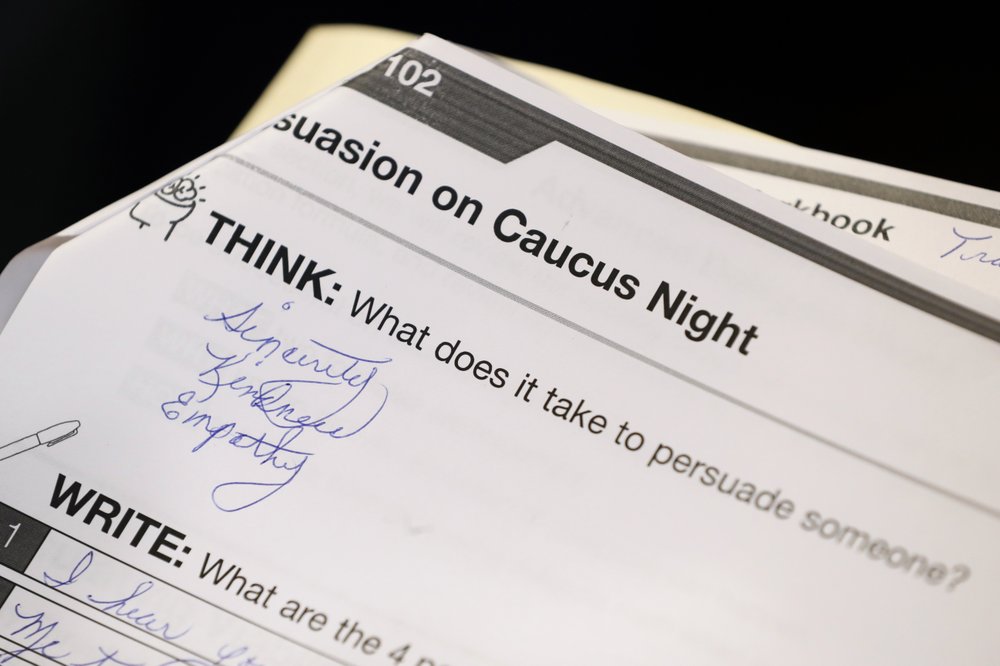 FILE - In this Jan. 9, 2020, file photo, a question in a training booklet is seen during a caucus training meeting at the local headquarters for Democratic presidential candidate former South Bend, Ind., Mayor Pete Buttigieg in Ottumwa, Iowa. (AP Photo/Charlie Neibergall)

On Monday, voters who have gathered at more than 1,600 caucus sites will begin their night by declaring support for their preferred presidential candidate. After a feverish round of lobbying, supporters of eliminated candidates can make a second choice.

This year, there’s a new wrinkle that could make the caucus even more chaotic.

For the first time, the Iowa Democratic Party will report three sets of results. There is no guarantee that all three will show the same winner.

Each set of results represents a different stage of the caucus. The new rules for Monday’s contest were mandated by the Democratic National Committee in a bid to make the process more transparent.

In the past, Iowa Democrats reported only one set of results: the number of state convention delegates won by each candidate through the caucus process. Democrats choose their party’s eventual White House nominee based on national convention delegates, and the state delegates are used to determine those totals in Iowa.

The Associated Press will declare a winner in Iowa based on the number of state delegates each candidate wins. The AP will also report all three results.

Q: What results will Iowa Democrats release out of the caucus?

A: There will be three sets of results: tallies of the “first alignment” of caucus-goers, their “final alignment” and the total number of State Delegate Equivalents each candidate receives.

This is the first time the party has made public the first and final alignment results.

Q: What do those categories mean, and how will the results be determined?

A: Caucuses are different from primaries. In a primary, voters go to the polls, cast their ballots and leave. At a caucus, voters gather at local precincts and declare support for their chosen candidate — then some have an opportunity to switch sides.

In Iowa, voters arriving at their caucus site will fill out a card that lists their first choice. Those results will be tabulated and will determine the results of the “first alignment.”

But that’s not the end of the night.

Caucusgoers whose first-choice candidate fails to get at least 15% of the vote can switch their support to a different candidate. The threshold can be higher at some precincts. If voters don’t choose another candidate, their vote won’t count in the final alignment. They can choose “uncommitted,” but that choice only gets reported if it, too, gets at least 15% of the vote.

Iowa will award 41 pledged delegates to the Democratic National Convention, based on the results of the party caucuses.

Q: Who will the AP declare the winner of the Iowa caucuses?

A: The AP will declare the winner of the Iowa caucuses based on the number of state delegate equivalents each candidate receives.

That’s because Democrats choose their overall nominee based on delegates. The other results will provide valuable insights into the process and the strength of the various candidates, but the state delegate equivalents have the most direct bearing on the metric Democrats use to pick their nominee.

Iowa and national Democratic Party figures also emphasize this is the number to watch.

Q: Could different candidates top each of the three categories of results?

The final alignment votes are used to calculate the state delegate equivalents, so the results should be similar. However, in a very close race, it is mathematically possible to have different winners there, too.

Q: Why are Democrats making this change?

A: The new rules were mandated by the DNC as part of a package of changes sought by Bernie Sanders following his loss to Hillary Clinton in the 2016 presidential primaries. The changes were designed to make the caucus system more transparent and to make sure that even the lowest-performing candidates get credit for all the votes they receive.

And it’s not just Iowa that is affected by the changes. The Nevada Democratic caucuses on Feb. 22 will also report three sets of results.