Bloomberg vows steadfast commitment to US aid for Israel 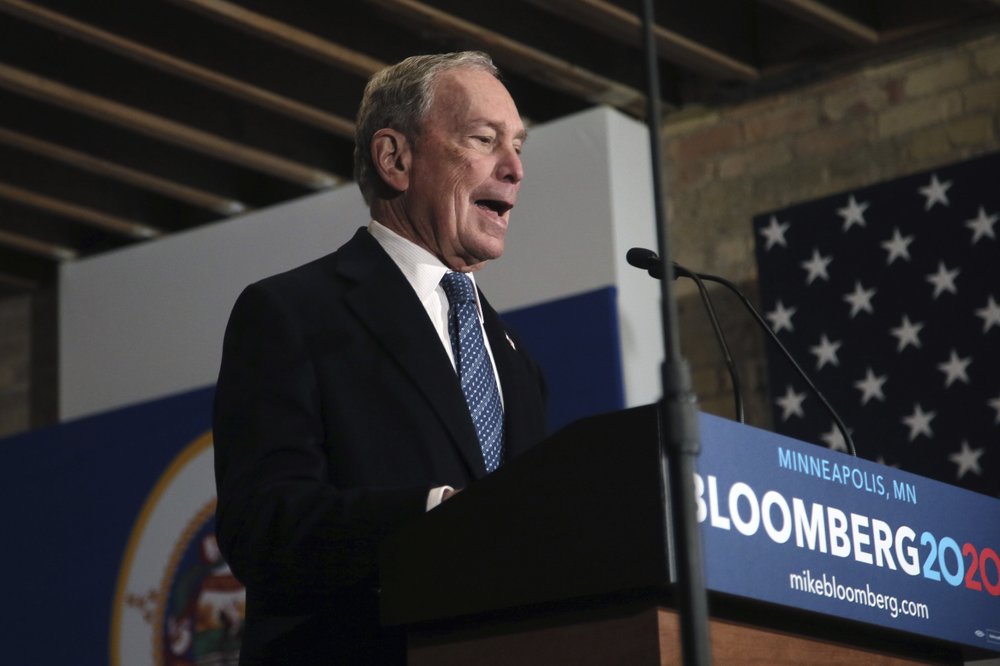 NEW YORK (AP) — Michael Bloomberg on Sunday made his case for the presidency to fellow Jewish Americans, vowing not to revisit U.S. aid to Israel — an approach that contrasts Bloomberg with several of his Democratic rivals, including his only fellow Jewish candidate in the race, Bernie Sanders.

Bloomberg, at a speech announcing a coalition of Jewish American supporters in Florida, vowed he would “never impose conditions” on U.S. military aid to Israel if elected. Sanders and rivals Elizabeth Warren and Pete Buttigieg have all left open the option of leveraging that aid to dissuade the Israeli government from annexation and settlement expansions in the West Bank.

“As president, I will always have Israel’s back,” said Bloomberg, who served three terms as mayor of New York.

It wasn’t the only distinction Bloomberg drew with Sanders, a U.S. senator from Vermont. In a line that drew laughs from the audience, he said he was the only Jewish candidate in the race not looking to “turn America into a kibbutz,” referring to communal Jewish farming cooperatives. Sanders volunteered on a leftist kibbutz in the 1960s, and has championed a democratic socialism that Bloomberg opposes.

Bloomberg’s wide-ranging speech touched on rising acts of violence against American Jews, criticism of President Donald Trump for withdrawing from the Iranian nuclear deal, a strong defense of Israel and the importance of protecting all marginalized groups from hatred and threats.

“This time is a time of great anxiety in the Jewish community, both around the world, and here at home — as ancient hatreds are given fresh currency with new technologies,” he said. “We are confronted by signs that we thought we would never see outside of old black-and-white newsreels: synagogues attacked, Jews murdered, Nazis marching brazenly and openly by torchlight.”

But Bloomberg made only passing reference to the Israeli-Palestinian conflict, saying he “will not wait three years” to release a peace plan for the region. Israeli Prime Minister Benjamin Netanyahu, embattled amid an indictment on corruption charges, and his political rival Benny Gantz were set to meet with Trump in Washington this week as the U.S. administration prepares to release its long-in-the-works Middle East peace plan.

Former Vice President Joe Biden, like Bloomberg, has already ruled out the idea of leveraging U.S. military aid to Israel, which has expanded settlements in the West Bank that the Trump administration recently decided to no longer consider a violation of international law. Every Democrat vying to challenge Trump supports an eventual two-state solution that allows Israelis and Palestinians to coexist peacefully in the region.

Bloomberg’s approach to rising anti-Semitism put him more squarely in line with the rest of the Democratic primary field. Like his rivals, the former mayor laid blame at Trump’s feet for rising discriminatory episodes targeting Jews as well as other minority groups.

Trump has faced criticism for invoking anti-Semitic tropes, such as his remark last year that Jewish Americans who voted Democratic were “disloyal” to their religion. Bloomberg accused Trump of “trying to use Israel as a wedge issue for his own electoral purposes.”

But in pairing his sharp criticism of Trump with an acknowledgment that “there is no single answer” for a recent rise in anti-Semitism, Bloomberg outlined what he described as discrimination against Jews “on both the right and the left.”

Trump signed an executive order last month that empowers the Education Department to pursue a broader swath of potential anti-Semitism complaints on college campuses. That order responds to concern about the discriminatory aftereffects of liberal pro-Palestinian organizing on campuses, but left-leaning Jewish American groups said it risks chilling legitimate criticism of the Israeli government’s policies.

Bloomberg did not address Trump’s order in his speech but his campaign indicated that, despite his commitment to fighting on-campus anti-Semitism, he shares the free speech concerns of the order’s critics. The former mayor said Sunday that he would expand the Education Department’s anti-bullying campaign “so we can put an end to harassment in schools – including on college campuses.”

While Bloomberg’s speech focused on threats to American Jews, he also criticized “a rising tide of hated writ large,” against black, Muslim and LGBTQ Americans as well as immigrants.

“Leadership sets a tone. It is either inclusive or exclusive, divisive or uniting, incendiary or calming,” he said. “I choose inclusion. I choose tolerance. I choose America.”