Social security, Medicare? Trump suggests he may be open to entitlement cuts in future 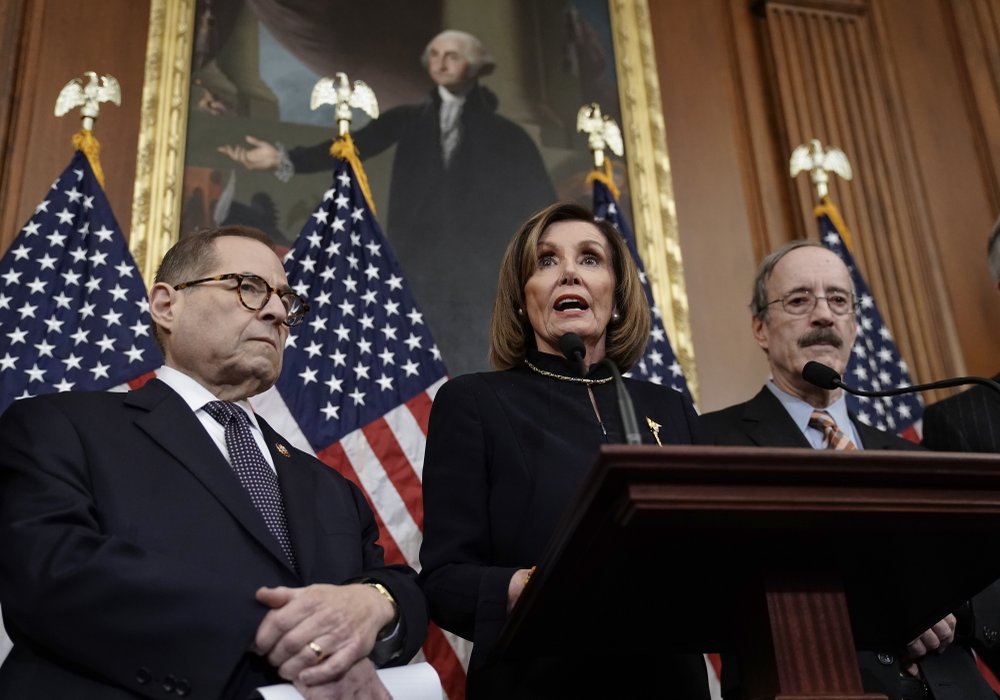 WASHINGTON (AP) — House Speaker Nancy Pelosi insisted on Thursday that before she will send the Republican Senate the articles of impeachment her Democratic chamber approved against President Donald Trump, GOP leaders must provide more detail about how they will handle the expected trial.

“We’d like to see a fair process, but we’ll see what they have and will be ready for whatever it is,” Pelosi said at the Capitol. “So far we haven’t seen anything that looks fair to us,” she had said Wednesday night, just after the House approved the two charges that could evict Trump from office if the Senate agrees.

The parties’ Senate leaders, Mitch McConnell for the Republicans and Chuck Schumer for the Democrats, met Thursday on trial arrangements but came to no agreement. The two men have a tense relationship, and McConnell holds a tactical edge if he can keep his 53-member Senate majority united.

Democrats are insisting on more witnesses, testimony and documents than McConnell appears willing to provide before they name the House “managers” who would prosecute Trump in the Senate.

“Sen. Schumer made clear to Sen. McConnell that the witnesses and documents are necessary to ensure a fair trial in the Senate,” said Schumer spokesman Justin Goodman. He said, “Schumer asked Sen. McConnell to consider Sen. Schumer’s proposal over the holidays.”

Wednesday night’s vote, almost entirely along party lines, made the president just the third in U.S. history to be impeached. The House impeached Trump on two charges — abusing his presidential power and obstructing Congress — stemming from his pressure on Ukraine to announce investigations of his political rival as Trump withheld U.S. aid.

Pelosi’s unexpected procedural delay in taking the next step — apparently in search of leverage in locking in trial arrangements — got a sour response from Senate Majority Leader McConnell and from Trump himself.

McConnell said Democrats were “too afraid″ to send the charges to the Senate, where Trump would be expected to be acquitted by the Republican majority. Trump tweeted, “Now the Do Nothing Party want to Do Nothing with the Articles.” He claimed that if the Democrats didn’t transmit the charges, “they would lose by default,” though there is no constitutional requirement to send them swiftly, or at all.

The trial has been expected to begin in January.

Along with her tough talk, Pelosi appeared upbeat the day after the impeachment votes.

“We’ve been hearing from people all over the country,” she told reporters. “Seems like people have a spring in their step because the president was held accountable for his reckless behavior.”

Pressed about next steps, Pelosi wouldn’t say. Democrats are insisting on more witnesses, testimony and documents than McConnell appears willing to provide before they name the House “managers” who would prosecute Trump in the Senate.

“The next thing will be when we see the process that is set forth in the Senate,” Pelosi said. “Then we’ll know the number of managers we may have to go forward and who we would choose.”

The Democratic speaker and the top Senate Democrat, Schumer of New York, met privately Thursday at the Capitol after Republican McConnell signaled in the strongest terms yet that his chamber intended to hold a swift trial and acquit the president of both charges.

McConnell denounced the “most unfair” House impeachment and reassured Trump and his supporters that “moments like this are why the United States Senate exists.”

The Kentucky Republican described Trump’s impeachment as “the most rushed, least thorough and most unfair impeachment inquiry in modern history.”

Fighting back using McConnell’s own words, Schumer said the Republican leader was plotting the “most rushed, least thorough and most unfair” impeachment trial in history by declining to agree to call witnesses including former Trump national security adviser John Bolton, who declined to testify before the House.

“McConnell claimed the impeachment was motivated by partisan rage,” said Schumer. “This from the man who said proudly, ‘I am not impartial.’”

Pelosi said that McConnell “says it’s OK for the foreman of the jury to be in cahoots with the lawyers of the accused. That doesn’t sound right to us.”

Complicating any decision to delay are House Democrats’ arguments in recent weeks that Trump’s impeachment was needed “urgently,” arguing his actions were a threat to democracy and the fairness of the upcoming 2020 election.