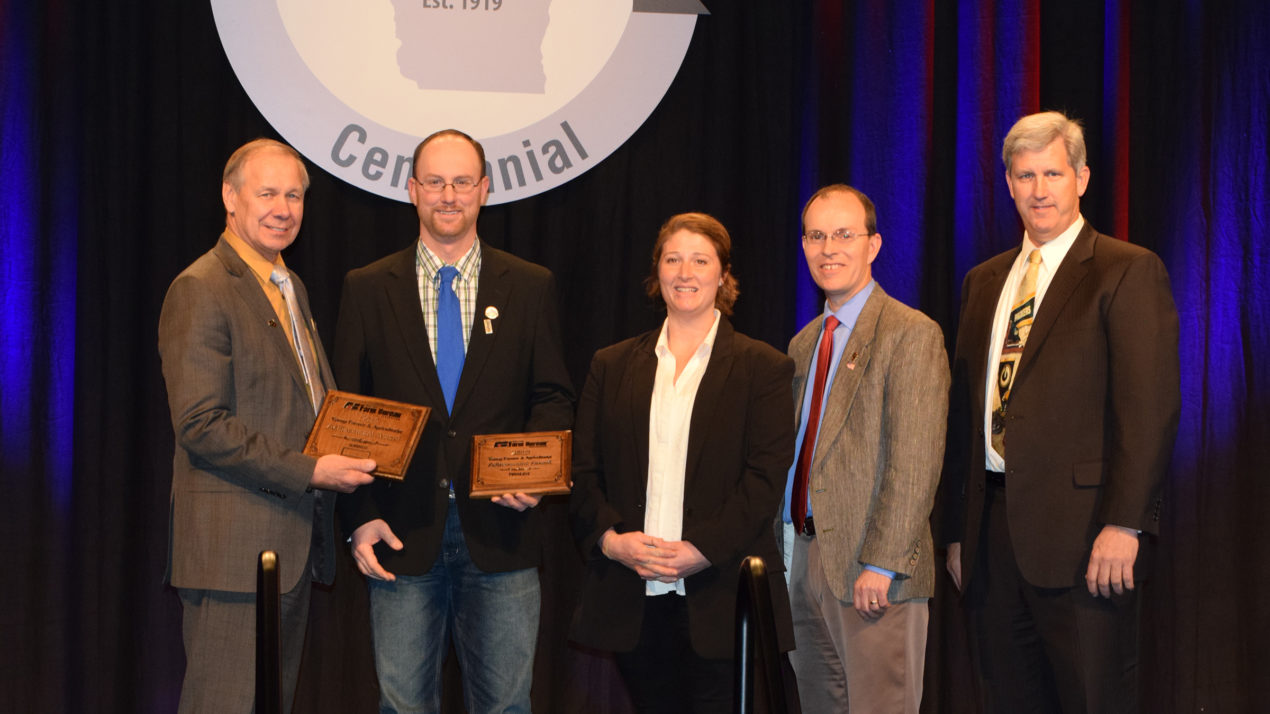 It’s been in the family for 125 years. Saturday, Organic farmers Travis and Krista Klinkner received a big award.

The Klinkners were selected as the winners of the Wisconsin Farm Bureau’s Young Farmer and Agriculturist Achievement Award at the organization’s 100th Annual Meeting.

The Klinkners are organic farmers in rural Viroqua, Wis. They purchased the farm from Krista’s parents in 2015.

Farm Bureau’s Achievement Award is a contest that awards farmers between the ages of 18 and 35, who have excelled in their farming career, understand current issues affecting agriculture and have shown leadership and involvement in Farm Bureau and other civic organizations.

The farm was not organic as Krista grew up, but they transitioned when she went to college. She studied chemistry and Spanish and later worked in Indianapolis as a chemist before moving closer to home in Madison.

Travis was raised on an organic dairy farm in Cashton. He received his degree in agriculture education from UW-River Falls.

Travis taught high school agriculture for 2.5 years in Sparta. Then, he shifted to Midwestern BioAg as a soils and agronomy consultant where he educated farmers. Through his position, he met Krista’s father and later his wife.

When the conversation of what to do with Krista’s home dairy farm came up, they jumped on the opportunity to take it over.

“We finally made things full circle, and I am very thankful to raise my family on our family dairy farm,” Krista said.

“We are farming land that was farmed by ancestors. That we are able to take that legacy and that we are still following conservation practices that are holding true today, we take pride in that.”

They have four children Liam, Brad, Hank, and Alice, who would be the fifth generation of farmers on Krista’s side and sixth or seventh on Travis’ side.

The couple stays busy with chores and their growing family and enjoys everything farming. When not working, they enjoy playing farm in their home or the sandbox and taking Ranger rides after chores to scout crops, wildlife or to visit with neighbors.

Despite this award being a long-term goal for the Klinkners, Travis and Krista said it was bittersweet accepting the honor.

“With the number of dairy farms that are leaving our state currently that I know there are a lot more well-deserving individuals than perhaps myself that maybe are not there anymore or just don’t have the time to do it,” Travis said. “Mother Nature has not been kind to anyone in the last couple of years. Our commodity prices haven’t been kind either. I am definitely proud of this award, but I know that there are a lot of others that are deserving too.”

The Klinkners will compete at the American Farm Bureau Federation’s 2020 Annual Convention in Austin, Texas. They also can participate in the 2021 YFA trip to Washington, D.C. They will be guests at GROWMARK’s 2020 annual meeting in Chicago and next year’s YFA Conference. In addition, FABICK Equipment, Inc., provides 40 hours use of a FABICK skid-steer.

The other finalists were Josh Claussen from Brown County and Brian Douglas from Dunn County.