5 states drag feet on creation of panels to promote Census 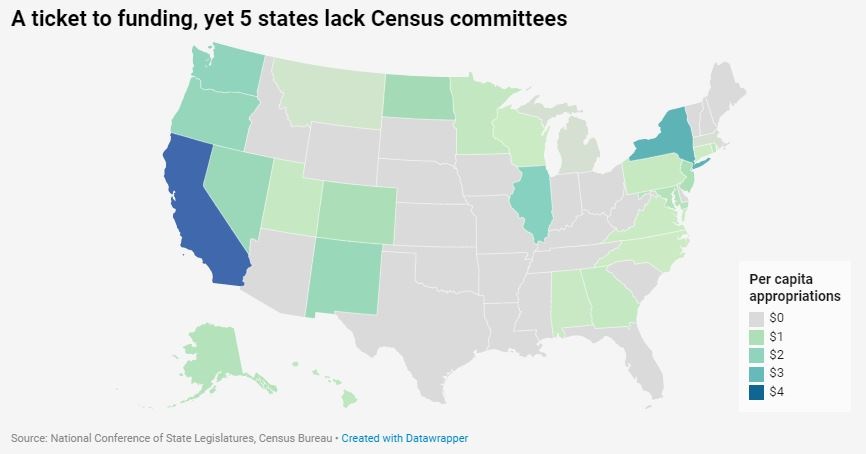 ORLANDO, Fla. (AP) — With billions in federal aid and seats in Congress at stake, some states are dragging their feet in carrying out one of the Census Bureau’s chief recommendations for making sure everyone is counted during the 2020 census.

Five states — Florida, Louisiana, Nebraska, South Dakota and Texas — have not set up “complete count committees” that would create public awareness campaigns to encourage people to fill out the questionnaires.

Six states — Iowa, Maine, Tennessee, Vermont, West Virginia and Wisconsin — only got on board in the past several weeks.

In some of those first five states, politicians argued that a statewide body would be unnecessary, since local committees, cities and nonprofit organizations are already working to publicize the census. In others, state leaders didn’t see any urgency to act.

The once-a-decade count of the U.S. population starts in January in a remote area of Alaska. The rest of the nation takes part starting in the spring.

“We are encouraging others to join in,” Census Bureau Director Steven Dillingham said this month. “The clock is ticking, and the time to join is now.”

Officials say the committees can separate census winners from losers.

“Complete count committees are extremely effective,” said Albert Fontenot, an associate director at the Census Bureau. “It’s in the states’ interests in that they get a funding flow and congressional seats.”

Of the holdout states, all but Louisiana have Republican governors.

In Texas, a measure to create a committee died in the GOP-dominated Legislature earlier this year even though the second most populous state has the most to gain from the census — up to three congressional seats.

Some Texas lawmakers were worried about losing their seats during redistricting if population surges favoring Democrats were found in urban and suburban areas, said Luis Figueroa, legislative and policy director at the Center for Public Policy Priorities in Austin.

Also, at the time, the Trump administration was pushing to add a citizenship question to the form, and some lawmakers didn’t want to take a stand on the issue by promoting the census, he said. The U.S. Supreme Court later blocked the question.

Twenty-six state governments are appropriating nearly $350 million to reach people and get them to respond to the census. The amounts range from California’s record $187 million to Montana’s $100,000, according to the National Conference of State Legislatures. New York City is committing $40 million.

States led by Democrats have spent more per capita. Of the 11 states spending at least $1 per resident, all but North Dakota have Democratic governors, according to an Associated Press analysis.

California, which stands to lose a seat in Congress, is spending $4.73 per person, using the money to target certain ethnic communities, provide educational materials to schools and identify community leaders who can personally encourage participation in the most populous state.

“You have to look at how many programs will suffer and how much money we will lose,” Katague said.

In Florida, the third most populous state, bills establishing a statewide committee died in the GOP-controlled legislature. With an influx from such places as Puerto Rico and Venezuela, Florida has gained about 2.5 million people since 2010 and could pick up two more congressional seats.

A spokeswoman for Florida Gov. Ron DeSantis said he is still reviewing what action should be taken to help get a full head count. “The governor takes the census seriously,” spokeswoman Helen Ferre said.

In Nebraska, Republican Gov. Pete Ricketts vetoed a bill to create a complete count committee, saying that local committees are already doing the work and that the legislation would have given a University of Nebraska program authority to create the panel without guidance from the state.

The number of congressional seats for Nebraska is expected to remain unchanged.

Still, “ultimately I think this will be a loss for Nebraska, especially in terms of receiving federal funds,” said state Sen. Matt Hansen, a Democrat from Lincoln who sponsored the legislation. “Specifically, I am concerned children, racial and ethnic minority populations, homeless persons, and those who live in rural and isolated areas will be undercounted.”