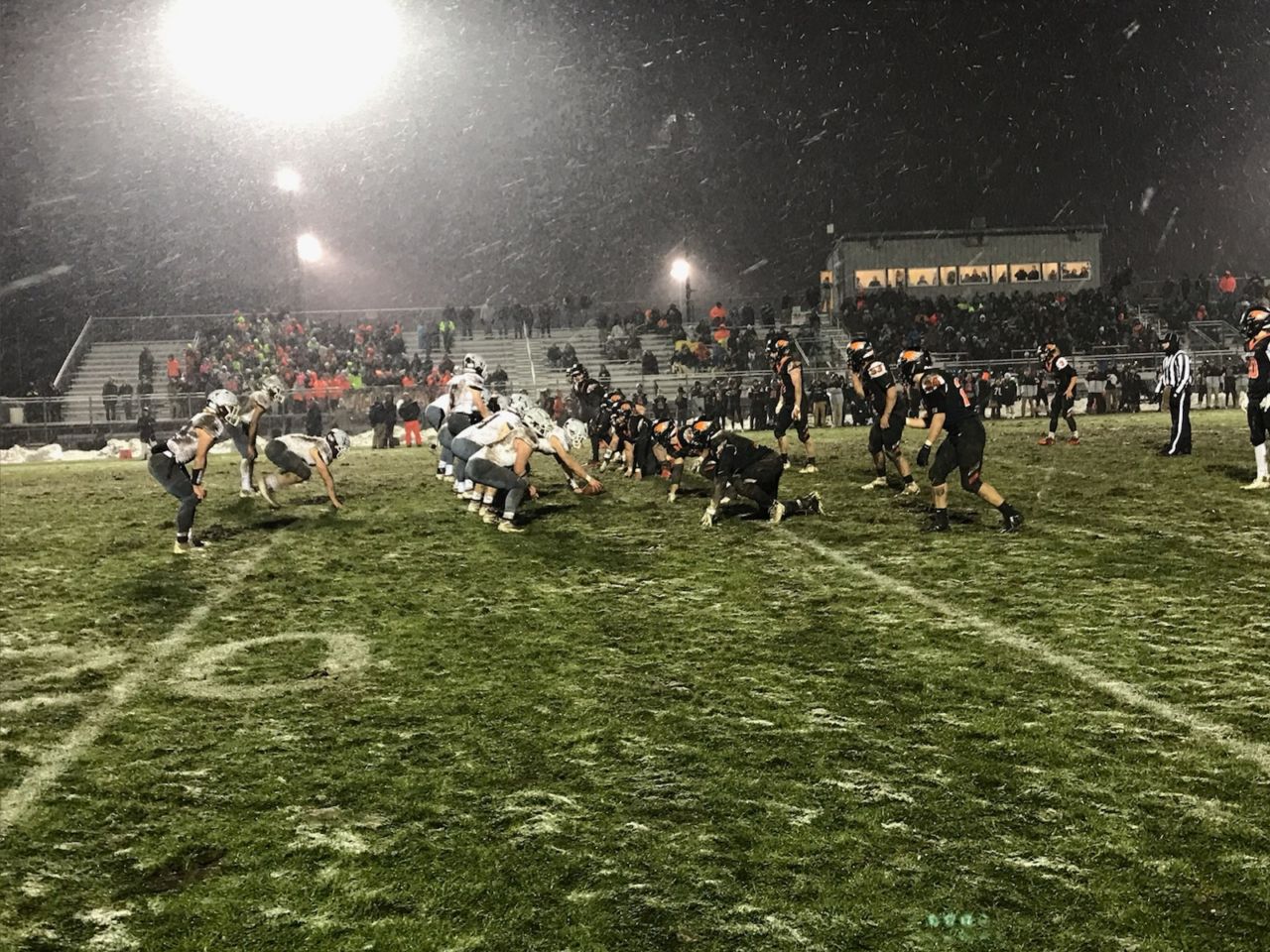 Holmen's offense lines up on a snowy night at Hartford High School in the second round of the WIAA Division 2 playoffs on Nov. 2, 2019. (PHOTO: Eric King)

HARTFORD, Wis. — It may have made for a scenic game but wet, slippery and snowy weren’t ideal conditions for football between the Hartford and Holmen high schools.

In the end, it was top-seeded Hartford that proved why it’s ranked in the Top 10 in the state with a 26-0 win over the Vikings in the second round of the Division 2 WIAA playoffs.

Hartford (11-0) — a team ranked seventh in the Large Division and known throughout the state for its passing attack — amassed 236 of its 259 yards of offense on the ground, and held Holmen to just 24 total yards — all rushing.

The game, however, may have had a completely different outcome had the Vikings (7-5) capitalized on its first possession.

After sacking Hartford on third down and taking advantage of a misplayed snap on the ensuing punt, Holmen took over inside the Hartford 20 yard line.

After the first play, the Vikings were 8 yards from a touchdown. A false start, however, sent them back and Holmen ended up having to attempt a field goal, where it bobbled the snap and came away with nothing.

The game remained scoreless after the first quarter and just 7-0 at halftime.

Out of the break, Hartford was able to make some plays — including a 54-yard touchdown run by A.J. Pepin, who finished with 181 yards and two TDs — while Holmen (7-5), which lost two of its five fumbles, couldn’t get anything going.

The Vikings finished 0-for-8 passing with an interception.

Hartford was a team that had thrown for over 2,500 yards and 26 touchdowns coming in. It finished 4-for-10 for 23 yards and two interceptions. The Orioles lost a fumble, as well.

DIVISION 5
GALESVILLE, Wis. Luke Vance had 290 yards and three touchdowns on 21 carries in leading top-seeded Gale-Ettrick-Trempeleau past No. 4 Aquinas 38-0.

G-E-T (10-1), which finished the regular season ranked just outside the Top 10 in the state’s Medium Division, will now host Prairie du Chien.

DIVISION 7
BANGOR, Wis. — Carter Hortsman rushed for 223 yards and two touchdowns on 25 carries in leading second-ranked and top-seeded Bangor to a 28-0 win over Alma/Pepin.