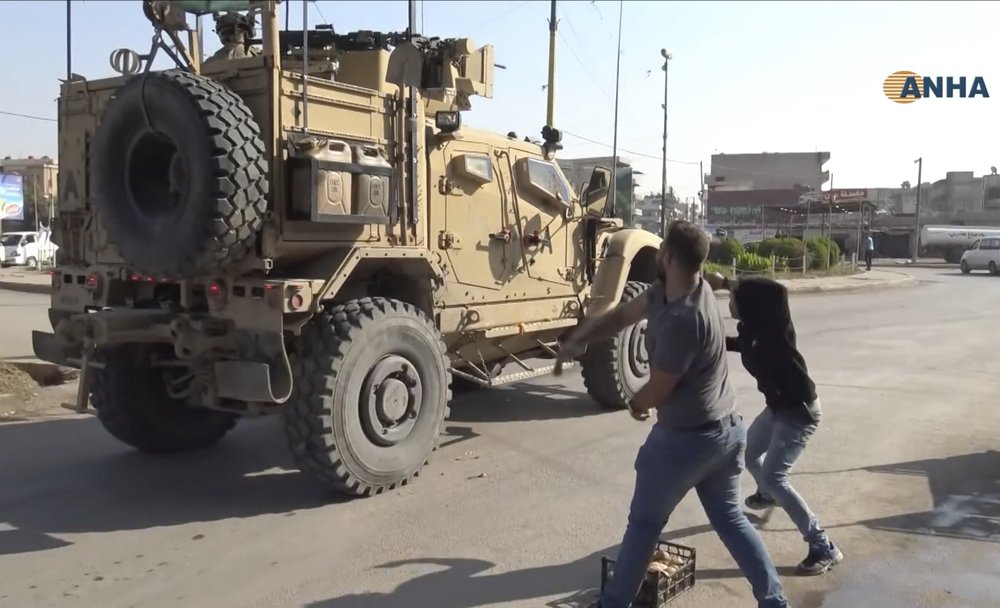 In this frame grab from video provided by Hawar News, ANHA, the Kurdish news agency, residents who are angry over the U.S. withdrawal from Syria hurl potatoes at American military vehicles in the town of Qamishli, northern Syria, Monday, Oct. 21, 2019. Defense Secretary Mark Esper said Monday in Afghanistan that U.S. troops will stay in eastern Turkey to protect Kurdish-held oil fields for at least the coming weeks and that he was discussing options to keep them there. (ANHA via AP)

Trump spurred a fresh wave of criticism Thursday with a tweet noting that he had spoken with Syrian Kurdish military chief Mazloum Abdi and observing that perhaps “it is time for Kurds to start heading to the Oil Region,” an apparent reference to oil fields in Deir el-Zour province of Syria. That’s an area that U.S. military commanders see as critical to holding off an Islamic State resurgence in the region.

But even as Trump heralded his push to pull nearly all U.S. troops out of what he derided as the “blood-stained sands” of Syria, he’s repeatedly referred to the country’s oil fields as prized land that he’s intent on protecting.

“We’ve secured the oil, and, therefore, a small number of U.S. troops will remain in the area where they have the oil,” Trump said Wednesday while discussing the pullout of all but 200 to 300 U.S. troops in Syria. “And we’re going to be protecting it, and we’ll be deciding what we’re going to do with it in the future.”

White House officials did not respond to requests for greater clarity about Trump’s tweet suggesting Kurds head to the oil region.

The Pentagon released a statement Thursday saying it is committed to sending additional military forces to eastern Syria to “reinforce” control of the oil fields and prevent them from “falling back to into the hands of ISIS or other destabilizing actors.”

No details were provided on how many or what kind of forces would be sent, or whether decisions on those details have been made.

Trump’s decision to withdraw the bulk of roughly 1,000 American troops from Syria drew bipartisan condemnation. The decision came after Turkish President Recep Tayyip Erdogan told Trump earlier this month that he intended to carry out an operation to clear the Turkey-Syria border of Kurdish fighters who fought side-by-side with U.S. troops in beating back IS fighters in northeast Syria.

The president’s comments this week raised fresh concerns that he has an incomplete understanding, or is indifferent to, the fragile dynamics of the region, his critics say.

“The President of the United States of America appears to be calling for a mass migration of Kurds to the desert where they can resettle atop a tiny oil field,” Brett McGurk, Trump’s former special envoy to the global coalition to defeat IS, wrote on Twitter.

“The Oil Fields discussed in my speech on Turkey/Kurds yesterday were held by ISIS until the United States took them over with the help of the Kurds,” Trump said in another tweet Thursday. “We will NEVER let a reconstituted ISIS have those fields!”

Eastern Syria is the center for what remains of Syria’s oil industry, which although in shambles, remains one of the main sources of revenues for the Kurdish-led administration there.

The Kurdish forces seized control of small oil fields in northeastern Hassakeh province after the government pulled out of most of the Kurdish-majority regions in 2012 to fight rebels elsewhere.

After expelling Islamic State militants from southeastern Syria in 2018, the Kurds seized control of the more profitable oil fields in Deir el-Zour province.

A quiet arrangement has existed between the Kurds and the Syrian government, whereby Damascus buys the surplus through middlemen in a profitable smuggling operation that has continued despite political differences. The Kurdish-led administration sells crude oil to private refiners, who use primitive homemade refineries to process fuel and diesel and sell it back to the administration.

The oil was expected to be a bargaining chip for the Kurds to negotiate a deal with the Syrian government, which unsuccessfully tried to reach the oil fields to retake them from IS. With Trump saying he plans to keep forces to secure the oil, it seems the oil will continue to be used for leverage— with Moscow and Damascus.

Before the war, Syria produced around 350,000 barrels per day, exporting more than half of it. Most of that oil came from eastern Syria. Foreign companies, including Total, Shell, and Conoco, all left Syria after the war began more than eight years ago.

Sen. Lindsey Graham, R-S.C., said after meeting with Trump on Thursday that he urged him to stay engaged in Syria.

“If you can find a way to secure the oil fields from Iran and ISIS, that’s in our national security interest,” Graham said.