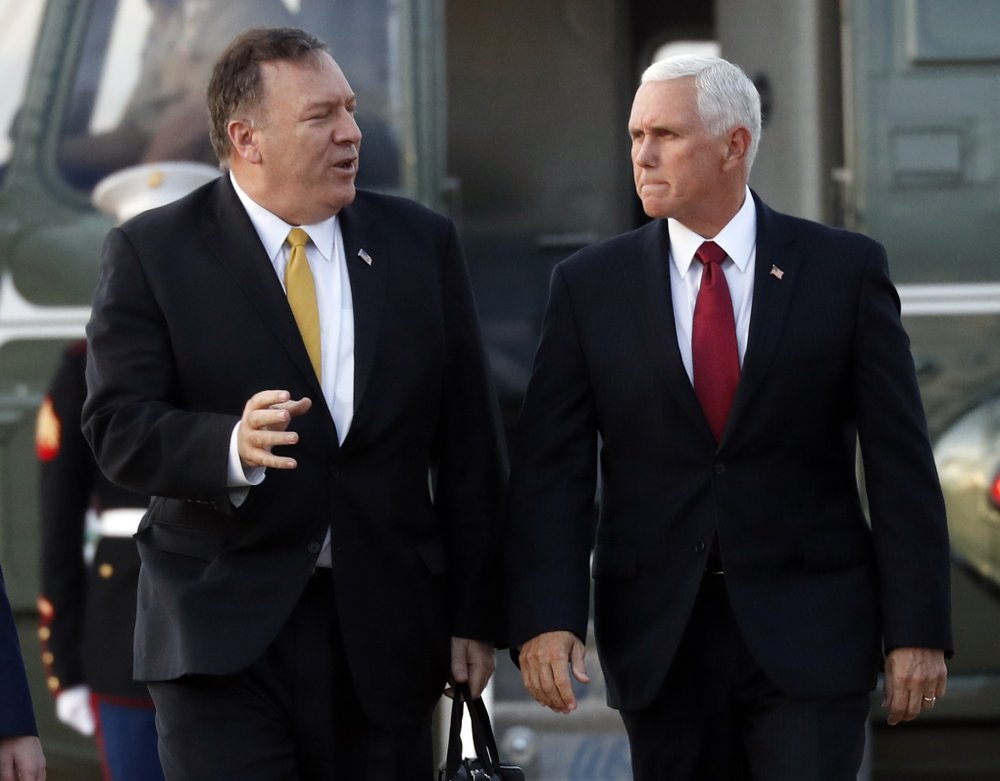 WASHINGTON (AP) — A senior U.S. delegation faces the herculean task of pressuring Turkey to accept a cease-fire in Northern Syria, hours after President Donald Trump declared the U.S. has no stake in defending Kurdish fighters who died by the thousands as America’s partners against Islamic State extremists.

Vice President Mike Pence, heading a U.S. delegation that includes Secretary of State Mike Pompeo and White House national security adviser Robert O’Brien, is set to arrive in Turkey Thursday afternoon, a day after Trump dismissed the very crisis he sent his aides on an emergency mission to douse.

Trump suggested Wednesday that a Kurdish group was a greater terror threat than the Islamic State group, and he welcomed the efforts of Russia and the Assad government to fill the void left after he ordered the removal of nearly all U.S. troops from Syria amid a Turkish assault on the Kurds.

“Syria may have some help with Russia, and that’s fine,” Trump said. “They’ve got a lot of sand over there. So, there’s a lot of sand that they can play with.”

He added: “Let them fight their own wars.”

The split-screen foreign policy moment proved difficult to reconcile and came during perhaps the darkest moment for the modern U.S.-Turkey relationship and a time of trial for Trump and his Republican Party allies. Severe condemnation of Trump’s failure to deter Turkish President Recep Tayyip Erdogan’s assault on the Kurds, and his subsequent embrace of Turkish talking points about the former U.S. allies, sparked bipartisan outrage in the U.S. and calls for swift punishment for the NATO ally.

The White House disclosed that Trump had both cajoled and threatened Erdogan in an unusual letter last week, urging him to act only in “the right and humane way” in Syria. The letter was sent the same day Erdogan launched the major offensive against the Kurds.

Trump started on a positive note by suggesting they “work out a good deal,” but then talked about crippling economic sanctions and concluded that the world “will look upon you forever as the devil if good things don’t happen. Don’t be a tough guy. Don’t be a fool!”

Republicans and Democrats in the House, bitterly divided over the Trump impeachment inquiry, banded together for an overwhelming 354-60 denunciation of the U.S. troop withdrawal. Many lawmakers expressed worry that the withdrawal may lead to revival of IS as well as Russian presence and influence in the area — in addition to the slaughter of many Kurds.

Many lawmakers expressed worry that the withdrawal may lead to revival of IS as well as Russian presence and influence in the area — in addition to the slaughter of many Kurds.

“I’m sorry that we are where we are. I hope the vice president and the secretary of state can somehow repair the damage,” McConnell said Wednesday.

Trump did place some sanctions Monday on Turkey for the offensive. But as his emissaries were departing to threaten even tougher actions in the days ahead, Trump appeared to undercut their negotiating stance. He said the U.S. has no business in the region — and not to worry about the Kurdish fighters.

As he seeks to push Erdogan to agree to a cease-fire, Pence will confront doubts about American credibility and his own, as an emissary of an inconsistent president.

“Given how erratic President Trump’s decision-making process and style has been, it’s just hard to imagine any country on the receiving end of another interlocutor really being confident that what Pence and Pompeo are delivering reflects Trump’s thinking at the moment or what it will be in the future,” said Jeffrey Prescott, the Obama administration’s senior director for Iran, Iraq, Syria and the Gulf states on the National Security Council and a former deputy national security adviser to former Vice President Joe Biden.

The withdrawal is the worst decision of Trump’s presidency, said Sen. Lindsey Graham, R-S.C., who meets often with the president and is one of his strongest and most important supporters in Congress.

Even before Trump’s comments, Erdogan had publicly stated that he will be undeterred by the sanctions and resisted calls for a cease-fire Wednesday, saying the fighting would end only if Kurdish fighters abandoned their weapons and retreated from positions near the Turkish border. If Pence can persuade Turkey to agree to a cease-fire, which few U.S. officials believed was likely, experts warn it will not erase the signal Trump’s action sent to American allies across the globe or the opening already being exploited by Russia in the region.

“Deterring an action that hasn’t yet been taken is almost always easier than trying to coerce someone to reverse an action that they’ve already committed blood, treasure and honor to,” said John Hannah, former national security adviser for former Vice President Dick Cheney and a senior counselor for Foundation for Defense of Democracies.

In public appearances, Trump said he was fulfilling a campaign promise to bring U.S. troops home from “endless wars” in the Middle East — casting aside criticism that a sudden U.S. withdrawal from Syria betrays the Kurdish fighters, stains U.S. credibility around the world and opens an important region to Russia.

“We have a situation where Turkey is taking land from Syria. Syria’s not happy about it. Let them work it out,” Trump said. “They have a problem at a border. It’s not our border. We shouldn’t be losing lives over it.”

After the House voted to condemn the withdrawal, congressional leaders of both parties went to the White house for a briefing, which grew contentious, with Trump and House Speaker Nancy Pelosi trading jabs. The Democrats said they walked out when the meeting devolved into an insult-fest.

“What we witnessed on the part of the president was a meltdown,” Pelosi, D-Calif., told reporters, saying Trump appeared visibly “shaken up” over the House vote. And Senate Democratic leader Chuck Schumer of New York criticized Trump for not having an adequate plan to deal with IS fighters who have been held by the Kurds. He said the meeting “was not a dialogue, this was sort of a diatribe, a nasty diatribe not focused on the facts.”

White House spokeswoman Stephanie Grisham called Pelosi’s action “baffling but not surprising.” She said the speaker “had no intention of listening or contributing to an important meeting on national security issues.”

Turkish troops and Turkish-backed Syrian fighters launched their offensive against Kurdish forces in northern Syria a week ago, two days after Trump suddenly announced he was withdrawing the U.S. from the area. Erdogan has said he wants to create a “safe zone” 30 kilometers (20 miles) deep in Syria.

Ankara has long argued the Kurdish fighters are nothing more than an extension of the Kurdistan Workers Party, or PKK, which has waged a guerrilla campaign inside Turkey since the 1980s and which Turkey, as well as the U.S. and European Union, designate as a terrorist organization.

Trump mischaracterized the progress made thus far by the U.S. military in carrying out his instructions to withdraw all 1,000 troops in northeastern Syria. He referred to the approximately two dozen soldiers who evacuated from Turkey’s initial attack zone last week, but cast that as meaning the U.S. has “largely” completed its pullout.

A U.S. official familiar with planning for the withdrawal of the 1,000 said that they are consolidating onto two main bases but have not yet begun flying out of Syria in significant numbers. Military equipment is being gathered and flown out, the official said, speaking on condition of anonymity due to the sensitivity of the withdrawal, which poses big security risks.

As U.S. troops pulled back, at least one ammunition cache was destroyed by a U.S. airstrike to prevent its usefulness, as Russian forces took possession of other former American strongholds.