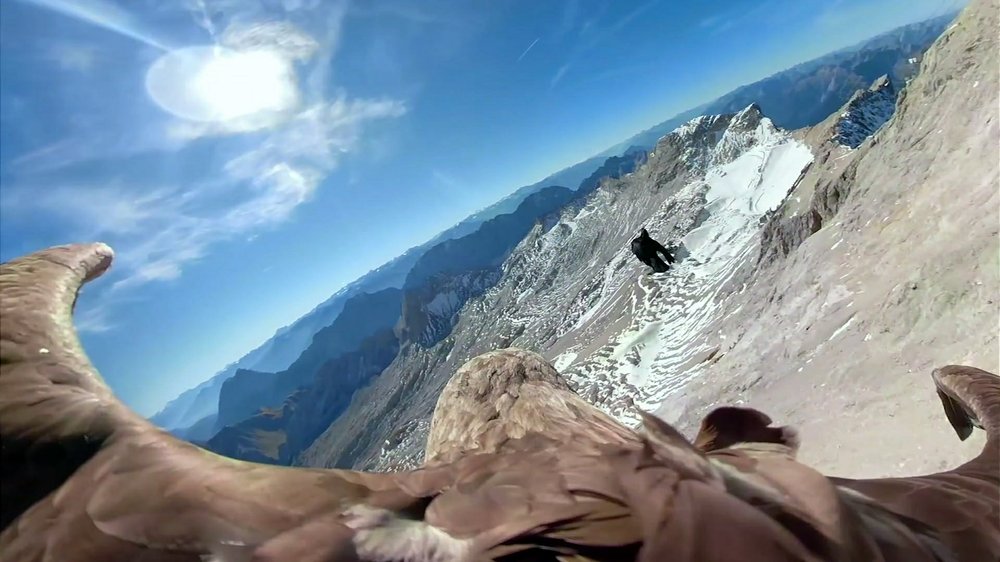 In this image made from video provided by Eagle Wings Foundation/Chopard, aerial footage shot by a camera attached to an eagle of a glacier in Western Europe. A white-tailed eagle is filming as he flies over the Alps and its once-magnificent glaciers, which are now crumbling because of global warming. The eagle named Victor will embark upon a series of flights in the first week on Oct. 2019, filming as he soars over the Alps. Organizers hope that his spectacular eagle’s-view footage will help jolt the world out of its climate-change apathy and toward swifter action to combat its effects. (Eagle Wings Foundation/Chopard via AP)

PARIS (AP) — The images will be stunningly beautiful yet also hint of dire future consequences. Filmed with a camera mounted between his majestic wings, they’ll show how a white-tailed eagle named Victor sees the world as he flies over the Alps and capture its once-magnificent glaciers now crumbling because of global warming.

Their wasting away is unlikely to be a pretty sight. And that’s the whole point.

Victor will embark upon five flights this week over the Alps. Organizers hope his spectacular eagle’s-view footage will help jolt the world out of climate-change apathy and toward swifter action to combat its effects.

His handler hopes that seeing the world as an eagle sees it will also convince viewers of the importance of protecting birds and their environments, especially after a devastating recent report chronicled their decline.

“Humanity has two dreams: to swim with dolphins and fly with eagles,” French falconer and Freedom Conservation founder Jacques-Olivier Travers said. “This is the first time that we’ll really ride on an eagle’s back over such distances and such vistas, and see how he flies.”

“How can you convince people to protect the birds and their environment if you never show them what the birds see?” he added.

Weather permitting, the nine-year-old Victor will set off Thursday from the top of the Swiss mountain Piz Corvatsch with a 360-degree camera on his back and a GPS to track his progress. He’ll fly through Germany, Austria and Italy before ending his mountain tour in France on Oct. 7.

“I don’t have a remote control. So if he doesn’t see me and decides not to come to me, he could go anywhere,” Travers said.

That’s why the flights are weather dependent. If Victor’s vision is obscured by clouds, “he won’t come,” Travers said. “It’s essential that he sees me.”

Carrying a camera does slow Victor down.

“It’s a bit like putting a washing machine on the roof of your car. You don’t go as fast and you use more energy,” Travers said. “It’s the same for him. He doesn’t fly as fast with that on his back and it demands a greater effort from him.”

Travers has witnessed the melting firsthand during scouting trips ahead of Victor’s travels. A German glacier that had hard-packed snow when he first visited last year is now mushy, he said.

“I was stunned,” he said. “The difference over a year was incredible.”

Disintegrating permafrost, which now glues a glacier’s rocks together, can cause them to crumble with potentially devastating consequences.

Victor’s flight comes as Italian authorities are scrambling to respond to fears that part of a large Italian glacier near Mont Blanc is on the verge of collapsing. They’ve warned that falling ice could endanger homes and people in the Val Ferret area, a popular hiking area.

At the rate the planet is warming, it’s too late to save the Alps’ glaciers, Freedom Conservation Managing Director Ronald Menzel said. But it’s not too late to fight climate change more broadly. He hopes Victor’s popularity will spur viewers into action.

“We hope that once more, people are going to see nature from a totally different perspective and just reconnect to it and realize that wow, it’s actually something that is amazing and that we want to do something to preserve,” he said.