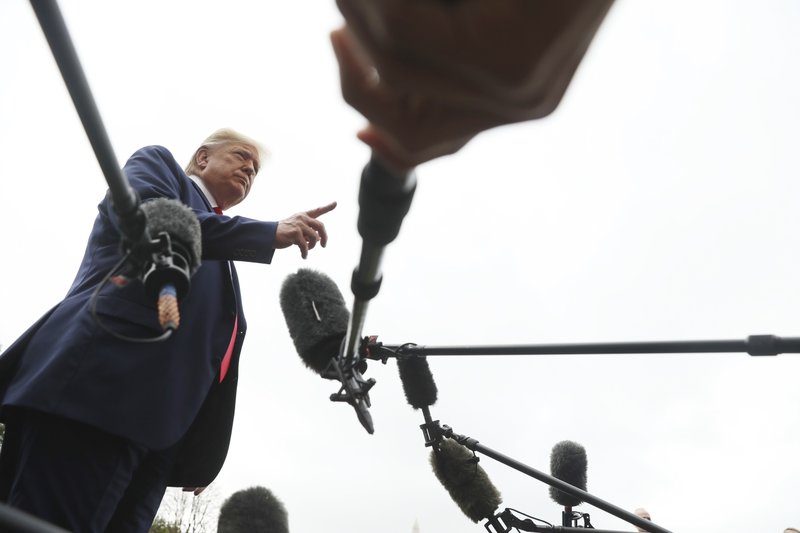 President Donald Trump speaks to members of the media on the South Lawn of the White House in Washington, Thursday, Oct. 3, 2019, before boarding Marine One for a short trip to Andrews Air Force Base, Md., and then on to Florida. (AP Photo/Andrew Harnik)

In remarks to reporters outside the White House Thursday, Trump called on China to investigate Biden and his son Hunter, though he said he has not yet appealed to China’s president to do so. The comments echo a similar “favor” he asked of Ukraine’s leader that has led to a House impeachment investigation.

Trump told reporters that Hunter Biden earned $1.5 billion from a “sweetheart” business deal in China. But while Hunter Biden had business ties to Chinese companies, there’s no evidence the claim is true.

Conservative researcher Peter Schweizer, who advanced corruption claims against Hillary Clinton ahead of the 2016 presidential race, was the first to make claims about a $1.5 billion-dollar business deal in China. Schweizer said the deal with a subsidiary of the Bank of China came after Hunter Biden accompanied his father on a diplomatic flight to Beijing in December 2013, while the senior Biden was vice president.

Hunter Biden at the time was a co-founder of an investment firm, Rosemont Seneca. Less than two weeks after the China trip, he and other investors launched a separate investment fund called Bohai Harvest RST.

Bohai Harvest was also among a consortium of investors that, in 2016, announced plans to raise $950 million to invest in an Australian subsidiary of a Chinese coal mining firm, according to Securities and Exchange Commission records. Those records and the mining firm’s annual report do not show whether the investments were ultimately carried out.

No evidence has emerged of any illegal dealings by Hunter Biden or his father in Bohai Harvest’s business interests in China.

There is also no evidence that Hunter Biden solely pocketed $1.5 billion from the China investment cited by Schweizer. The figure appears to have come from a deal announced in 2014 in which Bohai Harvest and other foreign and Chinese private equity firms aimed to raise $1.5 billion to invest outside of China.

But that deal ultimately raised less than a third of that amount, according to George Mesires, a lawyer for Hunter Biden. And Hunter Biden was an unpaid director of Bohai Harvest at the time, Mesires said on the Politifact website.

The younger Biden made no earnings from his Bohai Harvest board role until October 2017, nine months after his father left the White House, Mesires said. He then acquired a 10% interest in Bohai Harvest. NBC News said that stake would be worth about $4.2 million.