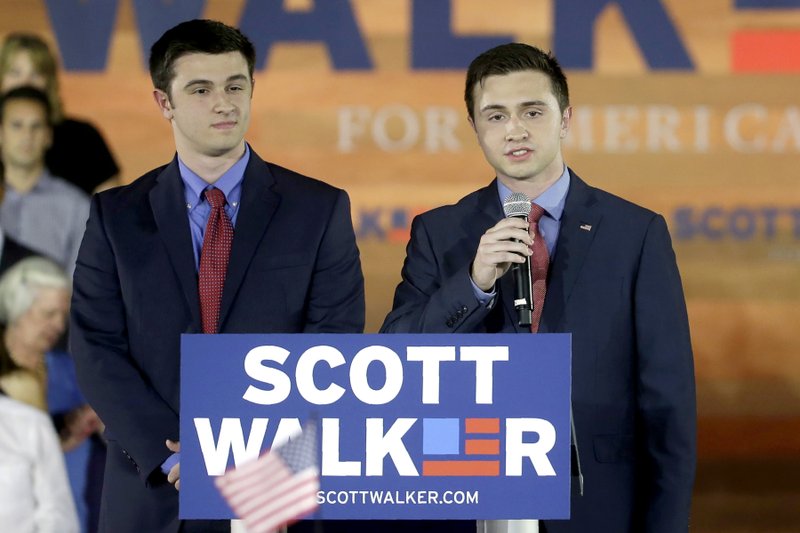 FILE - In this July 13, 2015, file photo, Wisconsin Gov. Scott Walker's son Alex, left, listens to his brother Matt, speak to supporters before their father announces he is running for the 2016 Republican presidential nomination in Waukesha, Wis. The former governor tells WISN-TV in an interview recorded Friday that his son Matt is interested in the seat being vacated by retiring Republican U.S. Rep. Jim Sensenbrenner. (AP Photo/Morry Gash, File)

Walker taped a television interview, tweeted and issued a statement saying that his son, Matt, is interested in the traditionally conservative seat that includes the city of Wauwatosa, where he was born and grew up. Matt Walker, a 2016 Marquette University graduate, has never run for public office.

“He’s had a number of people reach out to him,” Scott Walker said in an interview on WISN-TV. “I think in particular what intrigues him is he feels frustrated that AOC (New York Rep. Alexandra Ocasio-Cortez) somehow nationally is reflective of his generation. He’s 25 and he feels like there needs to be a counter-voice to that.”

The former governor has been a vocal critic of Ocasio-Cortez, a self-described democratic socialist. Since losing re-election as governor in November, Walker has continued to comment on politics on Twitter and in national media appearances, with Ocasio-Cortez as a frequent target, and has taken on jobs for conservative groups. He has ruled out running for office in 2020 or 2022 because he’s taking a job in 2021 as president of the Young America’s Foundation.

For now, he is the only Walker talking about Matt’s potential run. Matt Walker hasn’t responded to messages sent Thursday and Friday asking about his interest in the seat.

“When he asked me about it the other day, I gave him the advice you might not think of necessarily politically,” Scott Walker said. “I said, ‘One, you need to pray about it. If it’s God’s will to get in or not get in, you’ll figure that out first and foremost.’”

If Matt Walker were to run for Congress, he would be entering politics at a young age, just like his father. Scott Walker first ran for the state Assembly in 1990 when he was 22. He lost that race, but won an Assembly seat in 1993, at age 25, and remained in elected office until last year, when he lost to Democrat Tony Evers as he sought a third term as governor.

Scott Walker said he told his son that he would need to consult with his girlfriend and business partners before making a decision. Matt Walker is a partner and co-founder of Platform Digital, a company that says it helps “businesses leverage their brands through technology and strategy.”

Matt Walker joins a long list of Republicans, including several prominent office holders, who are looking at running to replace retiring U.S. Rep. Jim Sensenbrenner, who has held the seat since 1978.

A Matt Walker candidacy could make for some interesting debate around the family dinner table. His younger brother, Walker’s other son Alex, worked on Vukmir’s Senate campaign last year. He is now running the re-election campaign for Republican U.S. Rep. Bryan Steil, who represents southeast Wisconsin in Congress.

“His former friends and supporters also considering a run must be fuming,” Beyer said.