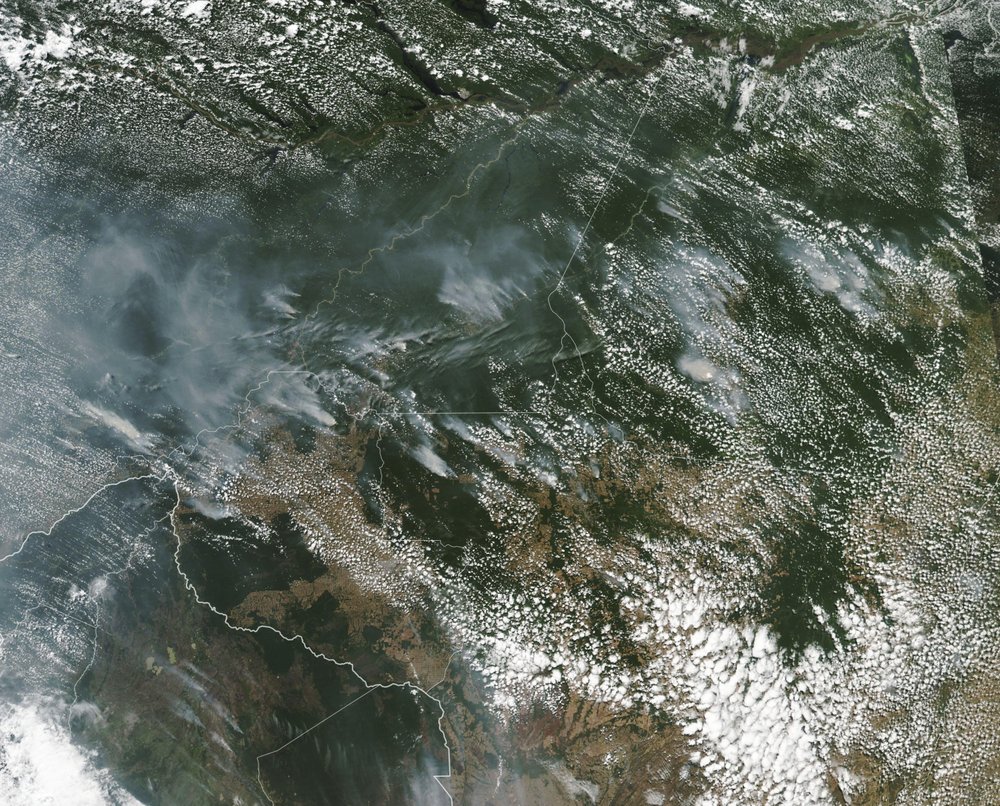 This satellite image provided by NASA on Aug. 13, 2019 shows several fires burning in the Brazilian Amazon forest. Brazil's National Institute for Space Research, a federal agency monitoring deforestation and wildfires, said the country has seen a record number of wildfires this year, counting 74,155 as of Tuesday, Aug. 20, an 84 percent increase compared to the same period last year. (NASA via AP)

RIO DE JANEIRO (AP) — Brazil’s official monitoring agency is reporting a sharp increase in wildfires this year, and President Jair Bolsonaro suggested Wednesday, without citing evidence, that non-governmental organizations could be setting them to make him look bad.

Brazil’s National Institute for Space Research, a federal agency monitoring deforestation and wildfires, said the country has seen a record number of wildfires this year, counting 74,155 as of Tuesday, an 84 percent increase compared to the same period last year. Bolsonaro took office on Jan. 1.

“Maybe — I am not affirming it — these (NGO people) are carrying out some criminal actions to draw attention against me, against the government of Brazil,” Bolsonaro told reporters.

When asked if he had evidence, the president did not provide any.

“There is a war going on in the world against Brazil, an information war,” Bolsonaro said.

Earlier this month, the head of the space research institute was forced to leave his position after standing up to the president’s accusations that deforestation data had been manipulated to tarnish the image of his administration.

National Geographic reported: Data released by INPE earlier this month indicated that more forest has been cleared in Brazil this summer alone than in the last three years combined.

“In the previous years [wildfires] were very much related to the lack of rain, but it has been quite moist this year,” says Adriane Muelbert, an ecologist who’s studied how Amazon deforestation plays a role in climate change.

“That leads us to think that this is deforestation-driven fire,” she says.

In addition to harvesting timber, many trees in the Amazon are cleared to plant soy or make way for lucrative cattle pastures. Burning is commonly used to clear trees quickly. Like the wildfires that plague California, most are started by humans, but then spiral out of control.

Lovejoy describes a cyclical system in which deforestation fuels forest loss, making the region drier, spurring even more deforestation. Much of the rain in the Amazon is generated by the rainforest itself, but as trees disappear, rainfall declines. Experts worry that this downward spiral could increasingly dry out the forest and push it to a point of no return, where it more resembles savannah than rainforest.

“The Amazon has this tipping point because it makes half of its own rainfall,” says Lovejoy. That’s why, he says, “the Amazon has to be managed as a system.”

The states that have been most affected by fires this year are Mato Grosso, Para and Amazonas — all in the Amazon region — accounting for 41.7 percent of all fires.

“It is very difficult to have natural fires in the Amazon; it happens but the majority come from the hand of humans,” said Paulo Moutinho, co-founder of the Amazon Environmental Research Institute.

Moutinho, who has been working in the Amazon forests for nearly 30 years, said fires are mostly used to clean up vast areas of land for farming or logging.

The fires can easily get out of control, especially now during the Amazon’s dry season, and spread to densely forested protected areas.

This year, the Amazon has not suffered from serious dryness, Moutinho said. “We’re lucky. If we had had droughts like in the past four years, this would be even worse.”

Bolsonaro, who once threatened to leave the Paris climate accord, has repeatedly attacked environmental nonprofits, seen as obstacles in his quest to develop the country’s full economic potential, including in protected areas.

Bolsonaro and Environment Minister Ricardo Salles are both close to the powerful rural caucus in Congress and have been urging more development and economic opportunities in the Amazon region, which they consider overly protected by current legislation.

Some NGOs, environmentalists and academics have been blaming the administration’s pro-development policies for a sharp increase in Amazon deforestation shown in the latest data from the space research institute.

The government is also facing international pressure to protect the vast rainforest from illegal logging or mining activities. The Amazon is often referred to as the lungs of our planet because it is a major absorber of carbon dioxide from the atmosphere.

Citing Brazil’s apparent lack of commitment to fighting deforestation, Germany and Norway have decided to withhold more than $60 million in funds earmarked for sustainability projects in Brazil’s forests.

French and German leaders have also threatened not to ratify a trade deal between the European Union and Mercosur countries to pressure Brazil into complying with its environmental pledges within the Paris Climate Agreement.

But experts say Brazilians and particularly farmers could be the first victims of excessive deforestation, as it could affect the regional climate, bringing higher temperatures and less rain.

Meanwhile, the environment minister was booed Wednesday as he took the stage at a five-day U.N. workshop on climate change in the northern state of Bahia — an event he had tried to cancel earlier this year.

Some in the audience shouted while waving signs reading, “Stop Ecocide” or “The Amazon is burning.”

“People are asking for more and more actions. … There is an acknowledgment that we are in a situation of crisis and emergency,” said Manuel Pulgar Vidal, former environment minister of Peru, who attended the event.

Vidal, who now works for the nonprofit WWF, said the criticism directed at Salles could eventually prod the administration into taking action on climate change. “There is no room for negationism,” Vidal said.