Hundreds of US returnees dumped in Mexico’s Monterrey 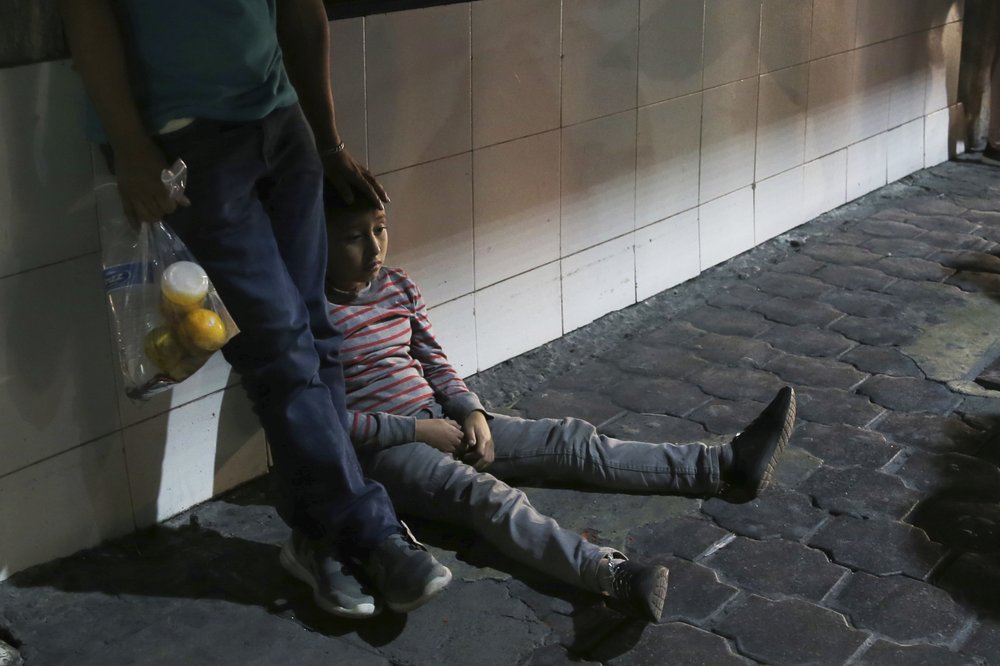 In this July 18, 2019 photo, a migrant child and his father stay together after being bused by Mexican migration authorities from Nuevo Laredo to Monterrey, Mexico. Unlike asylum seekers who wait in line, often for months, to file claims in the U.S. and then return to the Mexican border cities where they were before, all those taken to Monterrey who spoke with AP said they had crossed illegally and spent several days in U.S. detention centers before being returned with a court date. (AP Photo/Marco Ugarte)

MONTERREY, Mexico (AP) — The bus carrying dozens of Central Americans from the Texas border arrived in this northern Mexican city late at night and pulled up next to the station. Men and women disembarked with children in their arms or staggering sleepily by their sides, looked around fearfully and wondered what to do.

They had thought they were being taken to a shelter where they could live, look for work and go to school. Instead they found themselves in a bustling metropolis of over 4 million, dropped off on a street across from sleazy nightclubs and cabarets with signs advertising for “dancers.”

The Associated Press witnessed multiple such busloads in recent days carrying at least 450 Hondurans, Guatemalans and Salvadorans from Nuevo Laredo, across from Laredo, Texas, to Monterrey, where they are left to fend for themselves with no support on housing, work or schooling for children, who appear to make up about half the group.

Mexico has received some 20,000 asylum seekers returned to await U.S. immigration court dates under the program colloquially known as “remain in Mexico.” But there had been no sign of such large-scale moving of people away from the border before now, after the program expanded to Nuevo Laredo in violence- and cartel-plagued Tamaulipas, a state where the U.S. State Department warns against all travel due to kidnappings and other crime.

In response to a request for comment, the National Immigration Institute, or INM for its initials in Spanish, said in a two-paragraph statement that the agency cooperates with consular authorities and all levels of government to attend to returnees. It said Mexico abides by international law and is working to upgrade shelters and immigration facilities “to improve the conditions in which migrants await their processes in national territory.” The INM did not address specific questions about the AP’s findings.

Maximiliano Reyes, deputy foreign relations secretary, acknowledged last week that migrants were being removed from Nuevo Laredo and said it was for their own safety. He did not explain why they were dropped off in Monterrey or give further details.

“It’s clearly important to move people out of very dangerous Mexican border towns,” said Maureen Meyer, an immigration expert at the Washington Office on Latin America, which advocates for human rights in the region. “But simply busing them somewhere else without any guidance on what’s awaiting them and without having the services available to house asylum seekers and support them, the Mexican government’s really exposing them to further risk.”

This account is based on in-person interviews with more than 20 migrants who made the two-hour, 130-mile (220-kilometer) journey south to the industrial city in the week since the new practice began.

Unlike asylum seekers who wait in line for months to file claims in the U.S. and are then sent back, all those taken to Monterrey who spoke with the AP said they had crossed illegally and spent several days in U.S. detention centers before being returned with a court date. Some said they had not asked for asylum but rather to be returned to their home countries, but were told that going to Mexico or continued detention were the only options.

“I don’t know why they gave me this (court date) paper when I didn’t ask for it,” said Antonio Herrera, a Honduran policeman, explaining that he had asked U.S. immigration to deport him because his 7-year-old daughter was ill.

Javier Ochoa, who was with his 16-year-old son, did try to request asylum because the boy would be in danger back home for his participation in anti-government protests. He said he was not allowed to make his case.

U.S. authorities, those interviewed agreed, told them Mexico would offer them work, schooling and health care while they waited. The U.S. Department of Homeland Security did not respond to requests for comment.

President Andrés Manuel López Obrador has promised to provide those things, but the reality back in Nuevo Laredo turned out to be different.

The returnees were met at the crossing by waiting Mexican immigration officials who handed them documents presumably allowing them to work and move about the country. Without further explanation they were then loaded at an immigration station parking lot onto buses with the logos of private companies with charter contracts with the INM.

The migrants were not forced to make the journey but said they didn’t see any other option. They know the dangers that lurk in Tamaulipas, where organized crime groups have been known to extort, kidnap and kill people like them. In 2010, 72 were massacred in the town of San Fernando.

In Monterrey they found a big, unfamiliar city where, unbeknownst to them, shelters were already overflowing, and it quickly became clear they’d have to make do as best as they could.

Some asked the bus driver for advice on where to go. Others asked locals to borrow cellphones to beseech relatives for money or call their “coyotes,” or smugglers, to try to cross illegally again into the U.S.

“They have abandoned us here to get rid of us,” said Jazmin Desir, sitting on the floor of the bus terminal surrounded by her four sleeping children. The stylist and her husband, a mechanic, were waiting for relatives to send money for them to get back to Honduras, and they figured it would take two years to pay off the debt they took on to pay their coyote.

Within a half-hour only a handful remained at the terminal. The rest had melted away into the city.

Two days later, with money wired from relatives, a group hired a bus to take them to the southern city of Tapachula, near Guatemala. From there they would make their way home — essentially self-deporting at their own expense, $100 each for the 1,000-mile (1,700-kilometer) journey.

“After suffering so much, this is what we long for,” said Neftalí Anael Cantillana, a Honduran teacher who was traveling with her 16-year-old son.

At least one other group arranged a similar trip according to Jorge Pérez, the driver who took them.

López Obrador’s government did not mention the busings Monday when it presented a report halfway into a 90-day period during which it has agreed to reduce irregular transmigration as part of a deal to head off threatened U.S. tariffs.

The flow has fallen by 36% since, according to U.S. Border Patrol detention figures, and U.S. Secretary of State Mike Pompeo praised Mexico during a visit Sunday. Foreign Relations Secretary Marcelo Ebrard said Mexico is fulfilling its commitment to human rights.

But critics assert that the country has become a de facto dumping ground for people the Trump administration is eager to remove from U.S. soil.

“What the United States wants is to get rid of the Central Americans in a legal way, and it does so by handing them those documents,” said Aarón Méndez, director of the Amar shelter in Nuevo Laredo.

But he said he was unaware of the buses to Monterrey, even though they depart less than a mile (kilometer) from his offices: “Right now we have zero communication with the INM,” Carmona said.

Those arriving in Monterrey feel like they’ve been lied to and abandoned by everyone — except, some said, by their coyotes who held up their end of the bargain.

The Mexican government says it is studying setting up makeshift shelters at warehouses and other properties to handle returnees to Nuevo Laredo. Meanwhile “remain in Mexico” has gone into effect for another Tamaulipas border city: Matamoros, across from Brownsville, Texas.

Meyer said the busing policy also raises concerns about how asylum seekers will be able to access U.S. lawyers to assist with their claims, and who is going to make sure they can get back to Nuevo Laredo for their U.S. appointments, which are for September and October.

Julio Hernández, who was beaten and threatened in Guatemala for refusing extortion demands by gang members, is one who’s getting by. Left in Monterrey last week, he found work at a food stand and is not giving up on U.S. asylum.

But on Wednesday he said he was thinking of sending his wife and two kids home: “It’s very dangerous here too, and I don’t want to put them at risk.”