A look at the ‘squad’ that Trump targeted in racist tweets 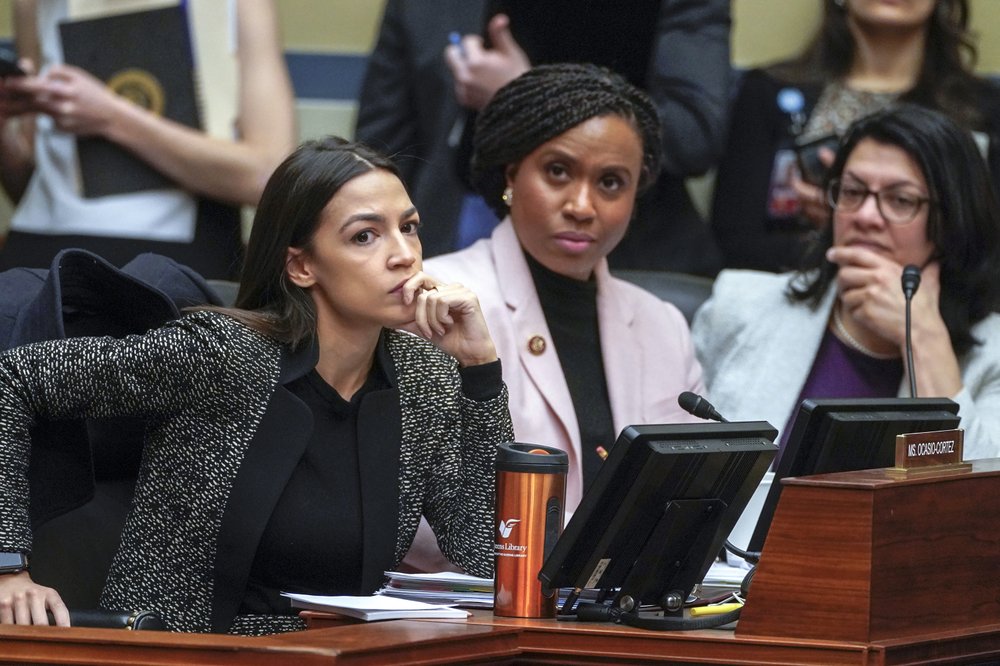 FILE - In this Feb. 26, 2019, file photo, Rep. Alexandria Ocasio-Cortez, D-N.Y., left, joined by Rep. Ayanna Pressley, D-Mass., and Rep. Rashida Tlaib, D-Mich., listens during a House Oversight and Reform Committee meeting on Capitol Hill in Washington. In tweets Sunday, July 14, 2019, President Donald Trump portrays the lawmakers as foreign-born troublemakers who should go back to their home countries. In fact, the lawmakers, except one, were born in the U.S. He didn’t identify the women but was referring to Reps. Ocasio-Cortez, Pressley, Tlaib and Ilhan Omar. (AP Photo/J. Scott Applewhite, File)

WASHINGTON (AP) — They’re all women of color. Every one of them is an American citizen. And of the four members of the self-styled “squad” duly elected to the House of Representatives, only one was born outside the U.S.

In racist tweets over the weekend, President Donald Trump almost certainly was referring to this group of liberal House freshmen whose elections in 2018 helped return the chamber to Democratic control. Among Trump’s tweets: “Why don’t they go back and help fix the totally broken and crime infested places from which they came.”

Trump defended the tweets Monday and suggested the Democrats leave the country if they have complaints. Condemnation poured in from Democrats and — slowly — a selection of Republicans.

Here’s a look at the lawmakers Trump referenced:

The Bronx-born former bartender is the charismatic star of the class of 2018, winning her seat in a primary and turning her massive social media following into a measure of power on Capitol Hill.

Ocasio-Cortez, a self-described democratic socialist, has clashed with House Speaker Nancy Pelosi over the influence of newcomers. She’s also been conspicuously courted by some of the party’s many presidential candidates, including Sens. Elizabeth Warren of Massachusetts and Bernie Sanders of Vermont.

To Trump, she tweeted:

“Mr. President, the country I ‘come from,’ & the country we all swear to, is the United States.”

Omar was a child when her family fled civil war in Somalia, an African nation of about 12 million, after it was shattered by a civil war in 1991. She spent years in a refugee camp in Kenya and immigrated to the United States as a refugee in 1995. Omar became eligible for citizenship five years after the family entered.

In the House, she has repeatedly run up against more senior Democrats over her remarks about Israel and what she said was the need to question the Jewish state’s influence in Washington.

To Trump, she tweeted:

“The only country we swear an oath to is the United States. Which is why we are fighting to protect it from the worst, most corrupt and inept president we have ever seen.”

The Detroit native is the first Palestinian American elected to the House. She and Omar are the first Muslim American women to serve in the chamber.

And like Omar, Tlaib made a name for herself almost immediately after House Speaker Nancy Pelosi gaveled the new session of Congress into session in January. That night, Tlaib was videotaped talking to a liberal group — saying of Trump: “We’re gonna impeach the motherf—er.”

No such effort is underway even now, in large part because Pelosi and other Democrats don’t see bipartisan public sentiment for doing so.

“Keep talking, you just make me work harder. I’m proud of my Palestinian roots & a WEAK bully like you never wins.”

A Cincinnati native raised in Chicago, Pressley worked for Rep. Joseph P. Kennedy and worked for John Kerry for 13 years while he served in the Senate.

In 2009, she ran for an at-large seat on Boston City Council and became the first woman of color elected to the body in its 100-year history.

Of Trump’s tweets, she responded:

“THIS is what racism looks like. WE are what democracy looks like. And we’re not going anywhere. Except back to DC to fight for the families you marginalize and vilify everyday.”