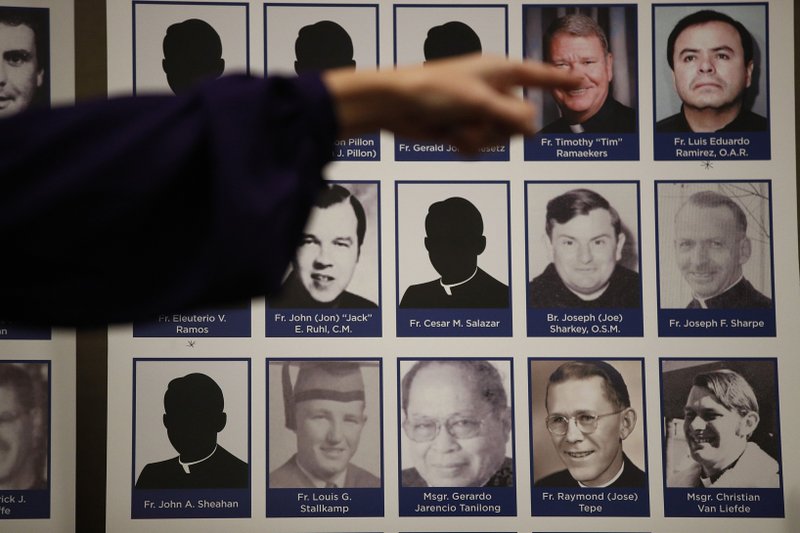 FILE - In this Thursday, Dec. 6, 2018 file photo, a sexual abuse victim points to the photos of Catholic priests accused of sexual misconduct by victims during a news conference in Orange, Calif. On Friday, May 31, 2019, the U.S. Catholic church says that allegations of child sex-abuse by clergy more than doubled in its latest 12-month reporting period, and its spending on victim compensation and child protection surged above $300 million. During the period between July 1, 2017, and June 30, 2018, 1,385 adults came forward with 1,455 allegations of abuse, according to the annual report of the U.S. Conference of Catholic Bishops' Secretariat of Child and Youth Protection. That was up from 693 allegations in the previous year. (AP Photo/Jae C. Hong)

Miller says Monday he’s sent letters to bishops in Davenport, Des Moines, Dubuque and Sioux City seeking lists of priests and other church employees deemed “credibly accused” of sexual abuse and lists of accusations deemed not credible. He also wants notes from board meetings where accusations were considered, documentation of reports of abuse received by church officials and actions taken, and copies of settlement agreements with abuse survivors.

Miller says he wants a response by Aug. 1.

He says survivors have urged his office to investigate and “bring attention to the injustice they and others have suffered.”

Iowa Catholic Conference spokesman Tom Chapman says each diocese plans to comply with Miller’s request. He says if there have been failures in the past, it is not for lack of trying, adding “there is no perfection this side of heaven.”

Miller’s office has a report form and a hotline for survivors on his office website.