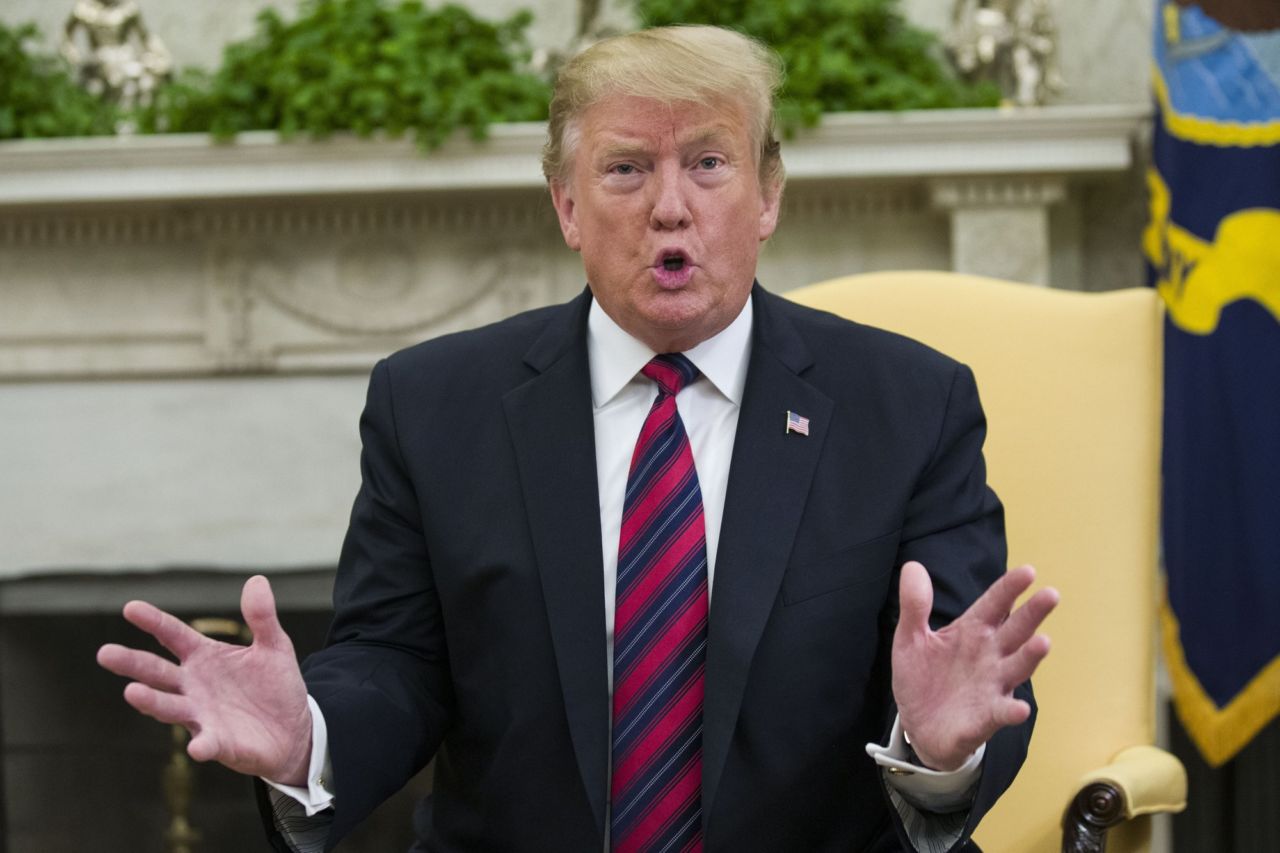 President Donald Trump speaks during a meeting with Slovak Prime Minister Peter Pellegrini in the Oval Office of the White House, Friday, May 3, 2019, in Washington. (AP Photo/Alex Brandon)

During their conversation on Friday, which the White House and Kremlin said lasted more than an hour, they also discussed a possible three-party arms control pact with China, North Korea’s nuclear weapons program, Ukraine and the crisis in Venezuela, where Moscow is propping up the current government over the U.S.-backed opposition.

“We had a good conversation about many things,” Trump told reporters in the Oval Office.

Trump said the two leaders were considering a new nuclear agreement “where we make less and they make less. And maybe even where we get rid of some of the tremendous firepower that we have right now.” He said they had discussed the possibility of including China in the deal and that China would “very much would like to be a part of” it.

But more interesting, perhaps, was what was left unsaid.

Trump said that, at no point, did he warn Putin not to meddle in the next election. And while he and Putin did discuss Mueller’s findings, they appeared to gloss over Mueller’s description of the extensive efforts Russia took to interfere in the 2016 election, including the 25 Russians indicted for that effort.

“We discussed it,” Trump said of the report. “He actually sort of smiled when he said something to the effect that, ‘It started off as a mountain and it ended up being a mouse,’” Trump said of Putin. “But he knew that because he knew there was no collusion whatsoever. So pretty much that’s what it was.

White House press secretary Sarah Sanders later said Trump didn’t tell Putin not to meddle in the 2020 election because he’s made that clear in the past. “He doesn’t need to do that every two seconds,” she said.

Mueller’s report concluded that Russian interference in the 2016 presidential election was “sweeping and systematic.” Ultimately, Mueller’s investigators did not find a criminal conspiracy between Russia and the Trump campaign, but they found multiple contacts. Indeed, the report concluded that “the Russian government perceived it would benefit from a Trump presidency and worked to secure that outcome, and that the Campaign expected it would benefit electorally from information stolen and released through Russian efforts.”

Trump tweeted after the call that the two had discussed topics including the “Russian Hoax.”

“As I have always said, long before the Witch Hunt started, getting along with Russia, China, and everyone is a good thing, not a bad thing,” he wrote.

Trump said he and Putin had instead focused on other topics, including the possibility of the new nuclear arms deal between the U.S., Russia and China. He said U.S. officials had broached the idea with the Chinese during ongoing trade talks and that China was “excited about that, maybe even more excited than about trade.” Discussions on a new nuclear deal, he said, would likely begin shortly between the U.S. and Russia, with China potentially added “down the road.”

Trump did not say which arms control agreement he and Putin had discussed, but the Russian state news agency Tass reported that they talked about the New START treaty, the last major arms-control treaty remaining between the U.S. and Russia.

The treaty, which was signed in 2010 and expires in 2021, restricts both the U.S. and Russia to 1,550 deployed strategic nuclear warheads on a maximum of 700 deployed intercontinental ballistic missiles and strategic bombers.

“There was a discussion about having — extending the current nuclear agreement — as well as discussions about potentially starting a new one that could include China as well,” Sanders said.

Trump earlier this year announced that he was pulling the U.S. out of the Intermediate-Range Nuclear Forces Treaty, or INF, a decades-old nuclear arms treaty with Russia. Trump accused Moscow of violating its terms with “impunity” by deploying missiles banned by the pact. Moscow denies violating it and has accused Washington of being in non-compliance.

Trump’s decision to exit the INF treaty reflected his administration’s view that it was an unacceptable obstacle to more forcefully confronting not only Russia but also China. China’s military has grown mightily since that treaty was signed, and the pact had prevented the U.S. from deploying weapons to counter some of those being developed by Beijing.

“The world has moved on from the Cold War and its bilateral arms control treaties that cover limited types of nuclear weapons or only certain ranges of adversary missiles,” national security adviser John Bolton told The Associated Press last week. “Russia and China must be brought to the table.”

A Kremlin readout of the call said the two presidents confirmed their mutual desire “to intensify dialogue in various fields, including on issues of strategic stability,” but gave no details about a possible arms deal.

The statement released by the Kremlin after Friday’s call said Putin stressed that “Pyongyang’s conscientious fulfillment of its obligations should be accompanied by reciprocal steps to reduce sanctions pressure on North Korea.”

On Venezuela, Trump insisted that Putin “is not looking at all to get involved in Venezuela, other than he’d like to see something positive happen for Venezuela.” That’s despite the fact that Russia has forged a political, military and economic alliance with Venezuela over many years and is helping to support President Nicolas Maduro’s embattled government.

The U.S. and about 50 other nations take the position that Maduro’s re-election last year was irrevocably marred by fraud and he is not the legitimate president. In January, the administration took the unusual step of recognizing Juan Guaido, the opposition leader of the National Assembly, as interim president.

The Kremlin said that during the call, Putin stressed that only the Venezuelan people have the right to determine the future of their country. The statement said that outside interference in internal affairs and attempts at forceful regime change in Caracas undermine the prospects for a political settlement of the crisis.