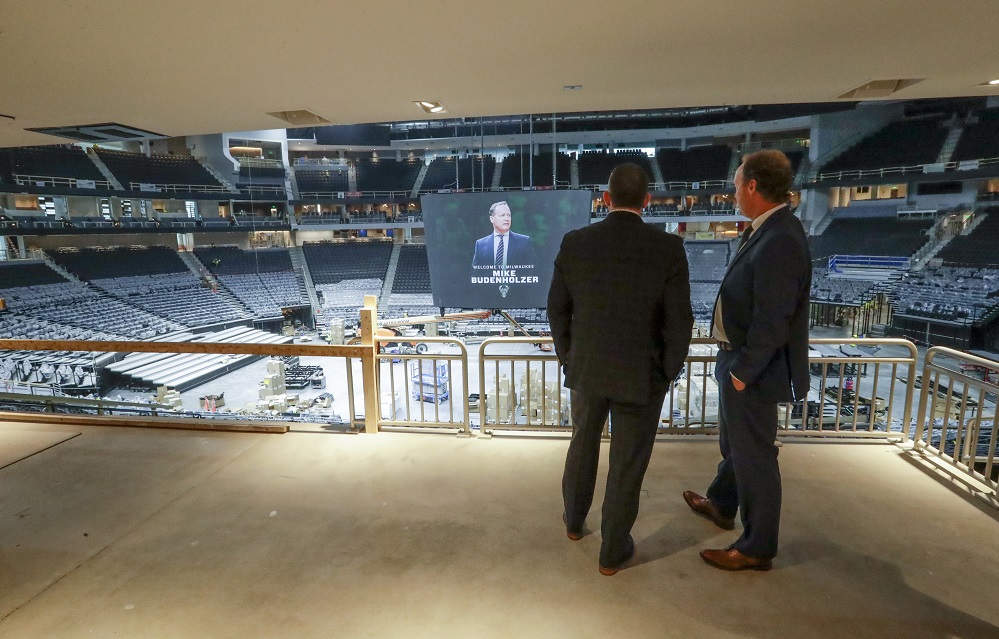 MILWAUKEE (AP) — Milwaukee will host the 2020 Democratic National Convention, party leaders announced Monday, highlighting the battleground state of Wisconsin that helped elect President Donald Trump and now will launch an opponent who could oust him.

“Where you hold our convention is a very strong statement of your values and who and what we are fighting for,” Perez said Monday surrounded by state and local officials.

Perez praised Milwaukee’s diversity and its labor unions, along with Wisconsin’s working-class identity. He called it an ideal backdrop for Democrats to launch a fall campaign to reclaim the White House four years after Trump stunningly outpaced Hillary Clinton across the old industrial belt of the upper Midwest and Great Lakes.

“The Democratic Party has again become an every ZIP code party,” Perez said. “We’re listening to people in every corner of the country.”

It will be the first time in over a century that Democrats will nominate their presidential candidate in a Midwestern city other than Chicago. Instead, the spotlight will shine for a week on a metro area of about 1.6 million people.

The Democratic National Committee has selected Milwaukee to host the 2020 national convention. It’s the first time in over a century that Democrats will be in a Midwest city other than Chicago to nominate their presidential candidate. (March 11)
Tap to unmute
Once dubbed as “The Machine Shop of the World,” the city is the birthplace of Harley-Davidson motorcycles and is known for its enduring love affair with beer — a trait displayed Monday as Perez and surrounding dignitaries closed their celebratory news conference with a toast.

Republicans are set to gather in Charlotte, the largest city in battleground North Carolina, on Aug. 24-27, 2020.

Perez noted that the convention site doesn’t determine the November outcome, but Democrats see plenty of symbolism in Milwaukee after a bitter 2016 election defined by Clinton being nearly swept in what her campaign aides had confidently called a Midwestern “Blue Wall.” That band of states twice sided with President Barack Obama, but Clinton held only Minnesota, ceding Wisconsin, Michigan, Ohio and Pennsylvania — a combined 64 of the necessary 270 electoral votes — as white working-class voters flocked to Trump.

It was the first time since 1984 that Republicans claimed Wisconsin in a presidential election. Afterward, Clinton took withering criticism for not once visiting Wisconsin as a general election candidate.

Evers and Barnes beamed Monday as they welcomed Perez.

Wisconsin Democrats pointed to those midterm election results as they lobbied Perez and DNC officials. “We plan to carry that momentum into 2020 and beyond,” Barnes said Monday.

In a political twist, Milwaukee officials have credited Walker for supporting the convention bid. Democratic Party proceedings will play out in the new 17,500-seat arena that Walker helped build for the NBA’s Milwaukee Bucks by securing public financing from state lawmakers. Walker later lobbied GOP-leaning business leaders and donors to support Milwaukee’s effort to land the event.

Perez was not among those praising Walker, repeatedly referring to the “former governor” without naming him and blasting his policies, particularly his fights with public unions and his spending priorities on education, for setting up Democrats’ midterm success.

For his part, Walker avoided the rancor.

“When it comes to a big convention like this, it’s not red, it’s not blue, it’s green,” Walker told The Associated Press after the announcement, referring to the economic impact.

Walker did warn Democrats that for all their enthusiasm, the convention could energize complacent Wisconsin Republicans to Trump’s benefit. “I think you’d be hard-pressed to find anyone who leans Democrat who wasn’t already motivated in the city or the state against the president,” Walker said.

Democratic officials in Washington said picking a host city is as much about logistics as anything else, even as they acknowledge political optics.

On logistics, Milwaukee may have pulled somewhat of an upset, given its small footprint compared to Houston and Miami, cities long accustomed to hosting major events. Houston hosted the Super Bowl as recently as February 2017.

Milwaukee organizers pitched their city — the Democratic stronghold of Wisconsin — as resurgent. Known for some of the country’s biggest brewers, including Pabst, Schlitz, Miller and Blatz, the metro area has a redeveloped downtown, a hotel capacity exceeding 17,000 rooms and a new downtown streetcar line that opened in November.

Still, the city had to prove it has the overall capacity for tens of thousands of delegates, party activists, donors and media.

DNC officials have said that the question wasn’t about hotel rooms but about whether Milwaukee has requisite venues for other convention staples, from daily sit-down breakfast meetings for 57 state and territorial delegations to evening events put on by state parties, corporations, lobbyists and donors. Even as Milwaukee officials insisted they have the venues, some deep-pocketed Democrats in nearby Chicago — a 90-minute drive — stepped in to note their proximity.

Houston and Miami, meanwhile, faced their own challenges.

Miami has an impressive concentration of luxury hotels, but many are in Miami Beach across bridges from downtown. That raised the prospect of delegates spending hours in traffic. The city’s arena also is not as new as Milwaukee’s.

Houston had few if any logistical barriers. But according to party officials with knowledge of the process, the city’s organizing committee struggled to come up with the necessary financing without resorting to oil and gas money. That industry is the city’s bread and butter, but it’s become anathema in Democratic politics because of its part in climate change. The city’s Democratic mayor also is embroiled in a labor dispute with Houston firefighters.

Also, though Houston and Miami are Democratic anchors in their states, Texas and Florida have no Democratic governor or senator between them.