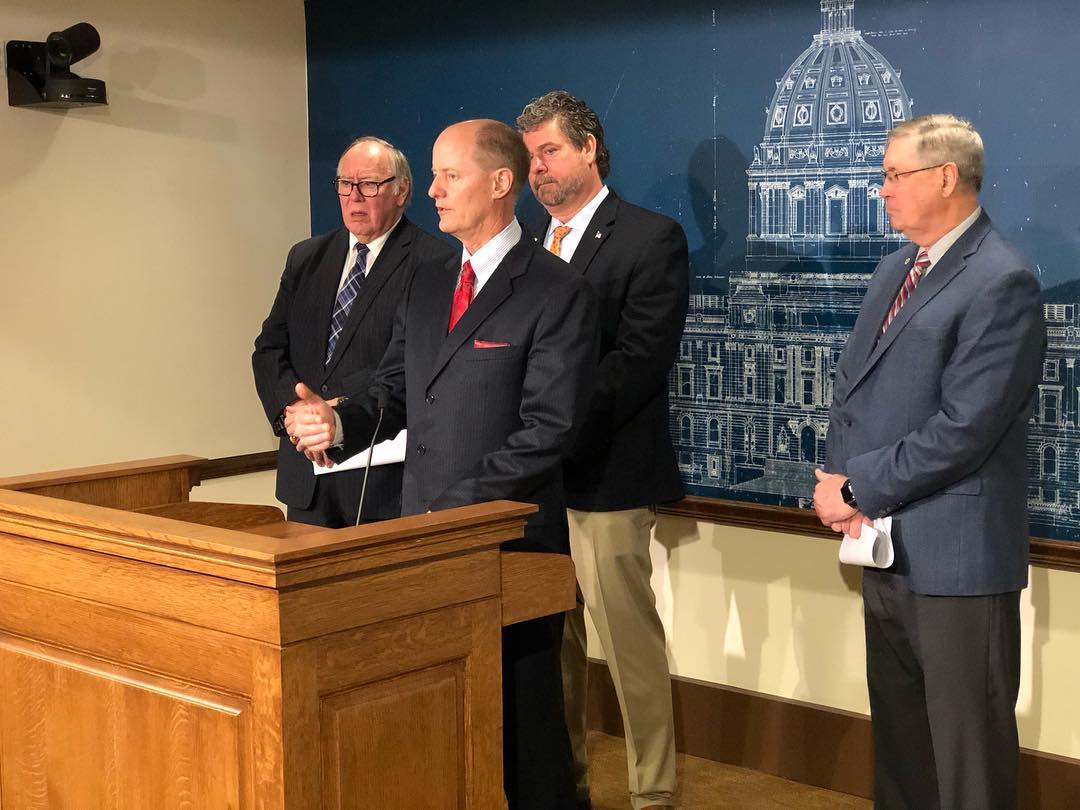 Sen. Paul Gazelka at the podium Monday at the Minnesota state Capitol.

ST. PAUL, Minn. (AP) — Minnesota Senate leaders said Monday that they’ve agreed with Gov. Tim Walz and their House counterparts on plans to provide about $13 million in immediate funding so repairs can continue on the state’s troubled vehicle registration system.

They are also working to find $10 million to compensate registrars around the state for losses incurred while trying to make it work.

The state has already spent more than $100 million and nine years developing MNLARS, which had a rocky launch when it went live in 2017 as an updated vehicle registration system.

The system’s flaws caused headaches for vehicle buyers, sellers and owners. While many components are now working well enough, others still require workarounds. Much of the burden has fallen on deputy registrars, a mix of private contractors and local government offices, who issue license plates and tabs, and transfer vehicle titles for the state.

Republican Senate Majority Leader Paul Gazelka told reporters the main bill could be on the governor’s desk and ready for him to sign Tuesday. He said leaders of the Democratic House majority and the Democratic governor were all on board.

The chairman of the Senate transportation committee, Republican Scott Newman, said that if they hadn’t reached an agreement, the state would have had to start laying off the temporary contractors who’ve been working on MNLARS.

If the temporary contractors leave, the state would lose those who know how to fix the system if it breaks down.

“We simply cannot allow that to happen. There’s far too many people in the state of Minnesota — literally millions of people — that would be affected,” Newman said.

Newman, who is from Hutchinson, said another key to winning his support was that the three sides agreed on hiring independent experts to address a bigger-picture issue. They’ll report back by May 1 on whether the state should spend money out of the next two-year budget to continue trying to fix the software system or whether it should try another approach, such as turning to the private sector, and how much more money to spend. Finishing the job will take more money than the amount announced Monday, he said.

Newman’s bill contains $13.3 million related to MNLARS, including $5.7 million for MNLARS itself, $5.5 million for work on a related driver’s license project and $2 million for temporary customer service staffing. A separate bill by GOP Sen. John Jasinski of Faribault, which was set for a hearing Tuesday, has $10 million for the deputy registrars.

“People say, can these two teams work together and get something done? Absolutely,” GOP Sen. Jim Abeler said.

Earlier Monday, Walz told reporters that MNLARS is improving but much work remains to be done. The governor said he successfully transferred the title this weekend on a vehicle that he sold, which wouldn’t have been possible when MNLARS initially rolled out. He also paid tribute to “an incredible good-faith effort to work together” on MNLARS between his new administration and legislators, particularly Newman and other Senate GOP leaders.

Walz said he hopes to finally name an information technology commissioner, the only unfilled position in his cabinet, in the “coming weeks.”