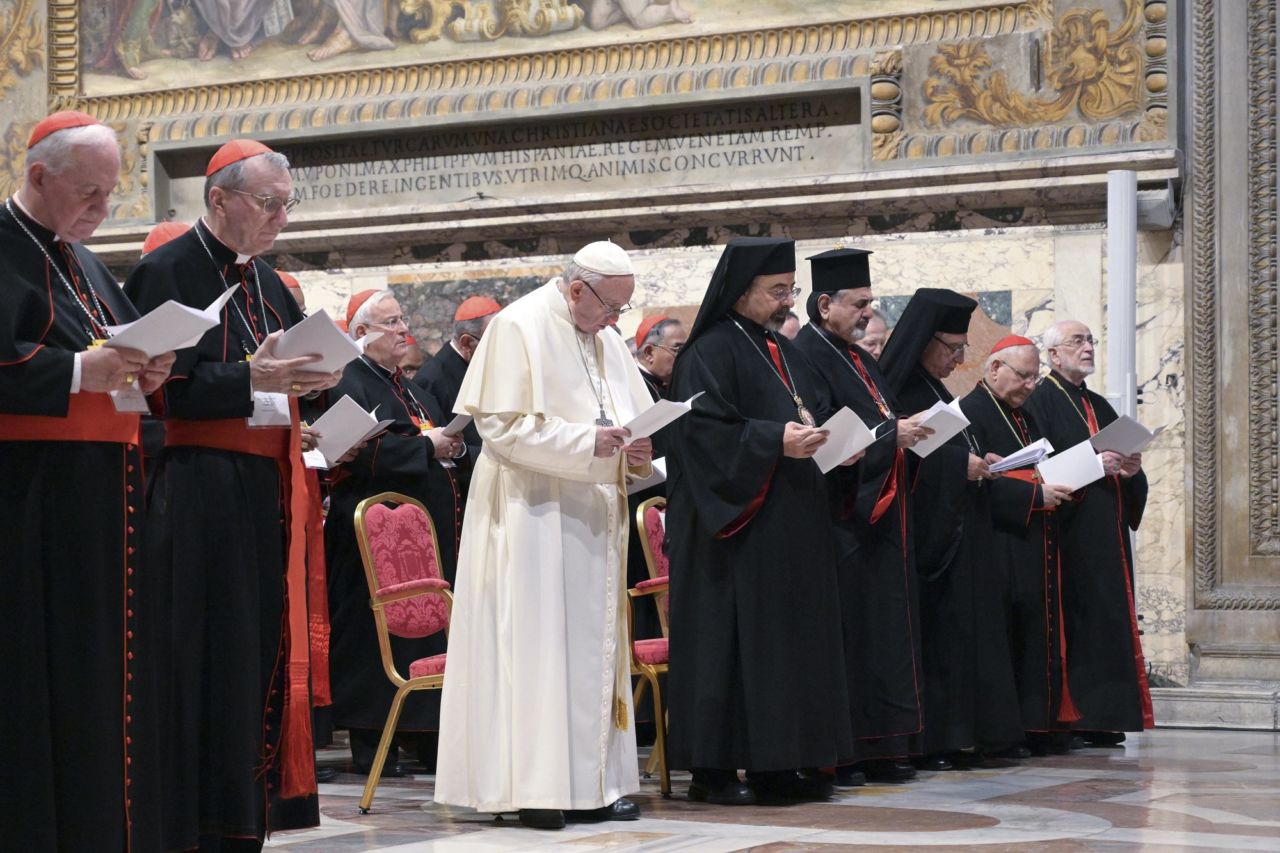 Pope Francis attends a penitential liturgy at the Vatican, Saturday, Feb. 23, 2019. The pontiff is hosting a four-day summit on preventing clergy sexual abuse, a high-stakes meeting designed to impress on Catholic bishops around the world that the problem is global and that there are consequences if they cover it up. (Vincenzo Pinto/Pool Photo Via AP)

VATICAN CITY (AP) — Pope Francis closed out his extraordinary summit on preventing clergy sex abuse by vowing Sunday to confront abusers with “the wrath of God” felt by the faithful, end the cover-ups by their superiors and prioritize the victims of this “brazen, aggressive and destructive evil.”

But his failure to offer a concrete action plan to hold bishops accountable when they failed to protect their flocks from predators disappointed survivors, who had expected more from the first-ever global Catholic summit of its kind.

Francis delivered his remarks at the end of Mass before 190 Catholic bishops and religious superiors who were summoned to Rome after more abuse scandals sparked a credibility crisis in the Catholic hierarchy and in Francis’ own leadership.

“Brothers and sisters, today we find ourselves before a manifestation of brazen, aggressive and destructive evil,” the pope said.

In a sign of new measures being taken, the Vatican announced that it would soon issue a new law creating a child protection policy for Vatican City State that covers the Holy See bureaucracy.

The Associated Press reported last year that the headquarters of the Catholic Church had no such policy, even though it insisted in 2011 that local churches have one and told the United Nations five years ago that a policy for Vatican City was in the works.

“It’s not like there is an enormous diffusion of these crimes inside Vatican City State or the Curia,” summit moderator the Rev. Federico Lombardi said. “But since we insist that we need laws and rigorous procedure (elsewhere), they should also exist where we are and in our institutions, starting with the Vatican City State.”

In his final remarks to the summit, Francis noted that the vast majority of sexual abuse happens in the family. And he offered a global review of the broader societal problem of sexual tourism and online pornography, in a bid to contextualize what he said was once a taboo subject.

But he said the sexual abuse of children becomes even more scandalous when it occurs in the Catholic Church, “for it is utterly incompatible with her moral authority and ethical credibility.”

Francis summoned the bishops from around the world to the four-day meeting to impress upon them that clergy sex abuse and cover-ups aren’t just a problem in some countries but a global problem that threatens the very mission of the Catholic Church.

He offered an eight-point pledge of priorities going forward, calling for a change in the church’s defensive mentality and a vow to never again cover-up cases. Victims, he said, must take center stage while priests must undergo a continuing path of purity with the “holy fear of God” guiding the examination of their own failures.

“If in the Church there should emerge even a single case of abuse – which already in itself represents an atrocity – that case will be faced with the utmost seriousness,” he said. “Indeed, in people’s justified anger, the church sees the reflection of the wrath of God, betrayed and insulted by these deceitful consecrated persons.”

But survivors who came to Rome expecting solid, concrete action were disappointed.

“There is nothing in his remarks about releasing documents that demonstrate the truth of how they are and have been covering up child sex crimes,” he said. “So what that is, is secrecy. So, if he is against secrecy about cover-ups, on Monday morning, we would be seeing those archives and criminal evidence released.”

Francis did propose one concrete step going forward, saying he wants to change church law governing child pornography. Currently the church only considers it a “grave delict” — or a crime handled by the Vatican office that processes sex abuse cases — if the child in question is under age 14. Francis wants to raise the age to 18 to cover all minors.

It wasn’t clear if the change was inspired by a recent case involving an Argentine bishop close to Francis.

The AP has reported that the Vatican knew as early as 2015 about Bishop Gustavo Zanchetta’s inappropriate behavior with seminarians. Yet he was allowed to stay on as bishop of the northern Argentine diocese of Oran on until 2017, when he resigned suddenly, only to be given a top job at the Vatican by Francis, his confessor.