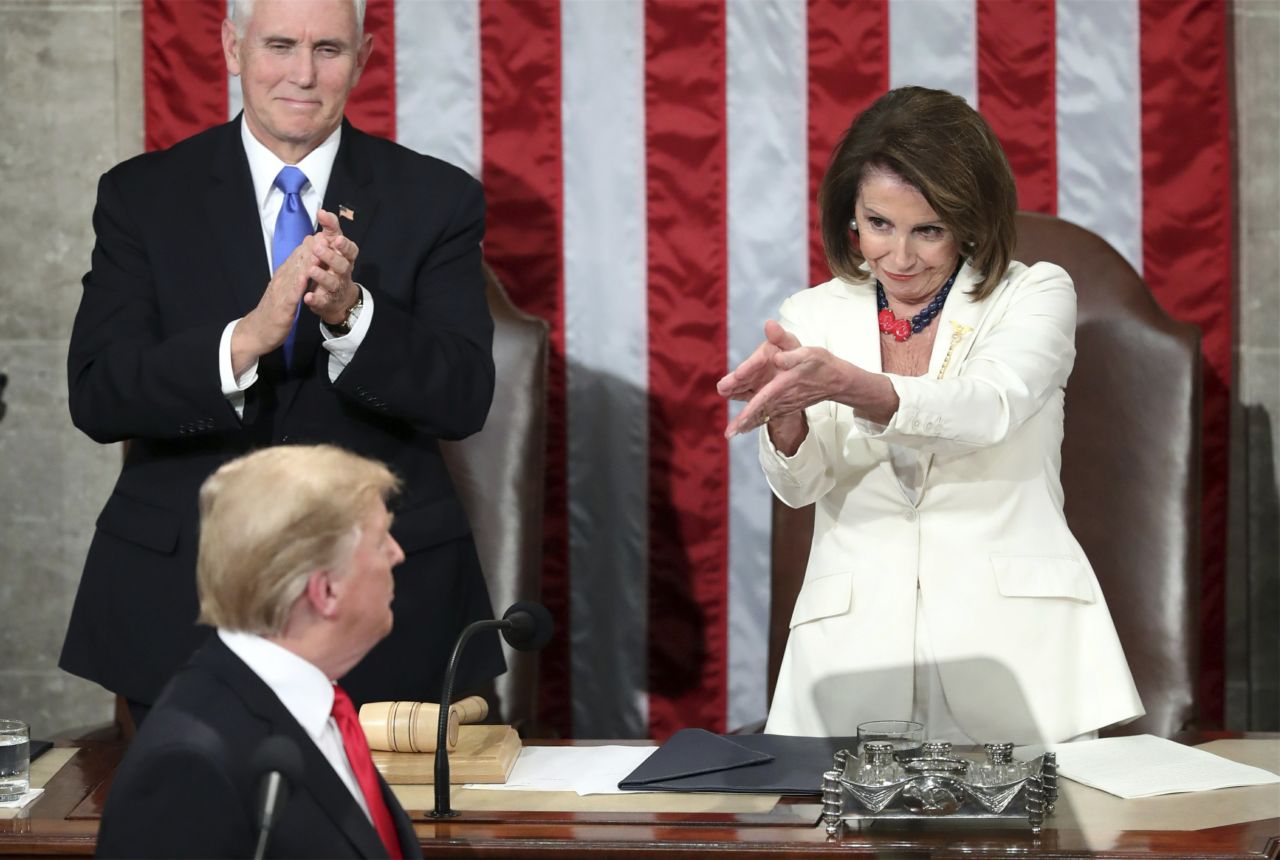 WASHINGTON (AP) — The Associated Press is fact-checking remarks from President Donald Trump’s State of the Union speech. Here’s a look at some of the claims we’ve examined:

TRUMP: “These (border) agents will tell you where walls go up, illegal crossings go way, way down … San Diego used to have the most illegal border crossings in our country. In response, a strong security wall was put in place. This powerful barrier almost completely ended illegal crossings … Simply put, walls work and walls save lives.”

THE FACTS: It’s a lot more complicated than that.

Yes, Border Patrol arrests in the San Diego sector plummeted 96 percent from nearly 630,000 in 1986 to barely 26,000 in 2017, a period during which walls were built. But the crackdown pushed illegal crossings to less-patrolled and more remote Arizona deserts, where thousands died in the heat. Arrests in Tucson in 2000 nearly matched San Diego’s peak.

Critics say the “water-balloon effect” — build a wall in one spot and migrants will find an opening elsewhere — undermines Trump’s argument, though proponents say it only demonstrates that walls should be extended.

The Government Accountability Office reported in 2017 that the U.S. has not developed metrics that demonstrate how barriers have contributed to border security.

TRUMP: “We recently imposed tariffs on $250 billion of Chinese goods — and now our treasury is receiving billions of dollars.”

THE FACTS: This is misleading. Yes, money from tariffs is going into the federal treasury, but it’s largely coming from U.S. businesses and consumers. It’s not foreign countries that are paying these import taxes by cutting a check to the government.

His reference to money coming into the treasury “now” belies the fact that tariffs go back to the founding of the country. This revenue did not start with his increased tariffs on some goods from China.

Tariffs did produce $41.3 billion in tax revenues in the last budget year, according to the Treasury Department. But that is a small fraction of a federal budget that exceeds $4.1 trillion.

The tariffs paid by U.S. companies also tend to result in higher prices for consumers, which is what happened for washing machines after the Trump administration imposed import taxes.

TRUMP: “Our new U.S.-Mexico-Canada Agreement — or USMCA — will replace NAFTA and deliver for American workers: bringing back our manufacturing jobs, expanding American agriculture, protecting intellectual property, and ensuring that more cars are proudly stamped with the four beautiful words: MADE IN THE USA.”

THE FACTS: It’s unlikely to do all those things, since the new agreement largely preserves the structure and substance of NAFTA.

In one new feature, the deal requires that 40 percent of cars’ contents eventually be made in countries that pay autoworkers at least $16 an hour — that is, in the United States, or Canada, but not in Mexico. It also requires Mexico to pursue an overhaul of labor law to encourage independent unions that will bargain for higher wages and better working conditions for Mexicans.

Still, just before the agreement was signed, General Motors announced that it would lay off 14,000 workers and close five plants in the United States and Canada.

TRUMP: “Already, as a result of my administration’s efforts, in 2018 drug prices experienced their single largest decline in 46 years.”

THE FACTS: Trump is selectively citing statistics to exaggerate what seems to be a slowdown in prices. A broader look at the data shows that drug prices are still rising, but more moderately. Some independent experts say criticism from Trump and congressional Democrats may be causing pharmaceutical companies to show restraint.

The Consumer Price Index for prescription drugs shows a O.6 percent reduction in prices in December 2018 when compared with December 2017, the biggest drop in nearly 50 years. The government index tracks a set of medications including brand drugs and generics.

However, that same index showed a 1.6 percent increase when comparing the full 12 months of 2018 with the entire previous year.

“The annualized number gives you a better picture,” said economist Paul Hughes-Cromwick of Altarum, a nonprofit research organization. “It could be that something quirky happened in December.”

Separately, an analysis of brand-name drug prices by The Associated Press shows there were 2,712 price increases in the first half of this January, as compared with 3,327 increases during the same period last year.

The size of this year’s increases was not as pronounced. Both this year and last, the number of price cuts was minuscule. The information for the analysis was provided by the health data firm Elsevier.

TRUMP: “Wages are rising at the fastest pace in decades, and growing for blue collar workers, who I promised to fight for, they’re growing faster than anyone else thought possible.”

THE FACTS: This is an unsupported statement because the data on hourly wages for private workers only go back to 2006, not decades.

But data on wages for production workers date back to 1939 — and Trump’s claim appears to be unfounded.

Average hourly earnings for production and non-supervisory workers are up 3.4 percent over the past year, according to the Labor Department. Those wage gains were higher as recently as early 2009. And they were averaging roughly 4 percent before the start of the Great Recession in late 2007.

There are other ways to track wage gains — and those don’t work in Trump’s favor, either.

TRUMP: “African-American, Hispanic-American and Asian-American unemployment have all reached their lowest levels ever recorded.”

THE FACTS: What he’s not saying is that the unemployment rates for all three groups have gone up since reaching record low levels.

Black unemployment reached a record low, 5.9 percent, in May, but rose to 6.8 percent in January.

The African-American rate is still nearly double the jobless rate for whites, at 3.5 percent.

The most dramatic drop in black unemployment came under President Barack Obama, when it fell from a recession high of 16.8 percent in March 2010 to 7.8 percent in January 2017.

TRUMP: “Human traffickers and sex traffickers take advantage of the wide open areas between our ports of entry to smuggle thousands of young girls and women into the United States and to sell them into prostitution and modern-day slavery.”

THE FACTS: His administration has not supplied evidence that women and girls are smuggled by the “thousands” across remote areas of the border for these purposes. What has been established is nearly 80 percent of international trafficking victims cross through legal ports of entry, a flow that would not be stopped by a border wall.

Trump distorts how often trafficking victims come from the southern border, according the Counter-Trafficking Data Collaborative , a global hub for trafficking statistics with data contributed by organizations from around the world.

The National Human Trafficking Hotline, a venture supported by federal money and operated by the anti-trafficking group Polaris , began tracking individual victim records in 2015. From January through June 31, 2018, it tracked 35,000 potential victims. Of those, there was a near equal distribution between foreigners on one hand and U.S. citizens and legal permanent residents on the other.

TRUMP: “In just over two years since the election, we have launched an unprecedented economic boom — a boom that has rarely been seen before. There’s been nothing like it. … An economic miracle is taking place in the United States.”

THE FACTS: The president is vastly exaggerating what has been a mild improvement in growth and hiring. The economy is healthy but not nearly one of the best in U.S. history.

The economy expanded at an annual rate of 3.8 percent last spring and summer, a solid pace. But it was just the fastest in four years. In the late 1990s, growth topped 4 percent for four straight years, a level it has not yet reached under Trump. And growth even reached 7.2 percent in 1984.

Almost all independent economists expect slower growth this year as the effect of the Trump administration’s tax cuts fade, trade tensions and slower global growth hold back exports, and higher interest rates make it more expensive to borrow to buy cars and homes.

TRUMP: “All Americans can be proud that we have more women in the workforce than ever before.”

THE FACTS: Of course, there are more women working than ever before. But that’s due to population growth — and not something that Trump can credit to any his policies.

The big question is whether a greater percentage of women is working or searching for a job than at any point in history. And on this count, women have enjoyed better times.

Women’s labor force participation rate right now is 57.5 percent, according to the Labor Department. The rate has ticked up recently, but it was higher in 2012 and peaked in 2000 at roughly 60 percent.

TRUMP: “We have unleashed a revolution in American energy – the United States is now the number one producer of oil and natural gas in the world.”

THE FACTS: True, if “we” means Trump and his recent predecessors. It’s not all to Trump’s credit. The government says the U.S. became the world’s top natural gas producer in 2013, under Barack Obama’s administration.

The U.S. now leads the world in oil production, too, under Trump. That’s largely because of a boom in production from shale oil, which also began under Obama.