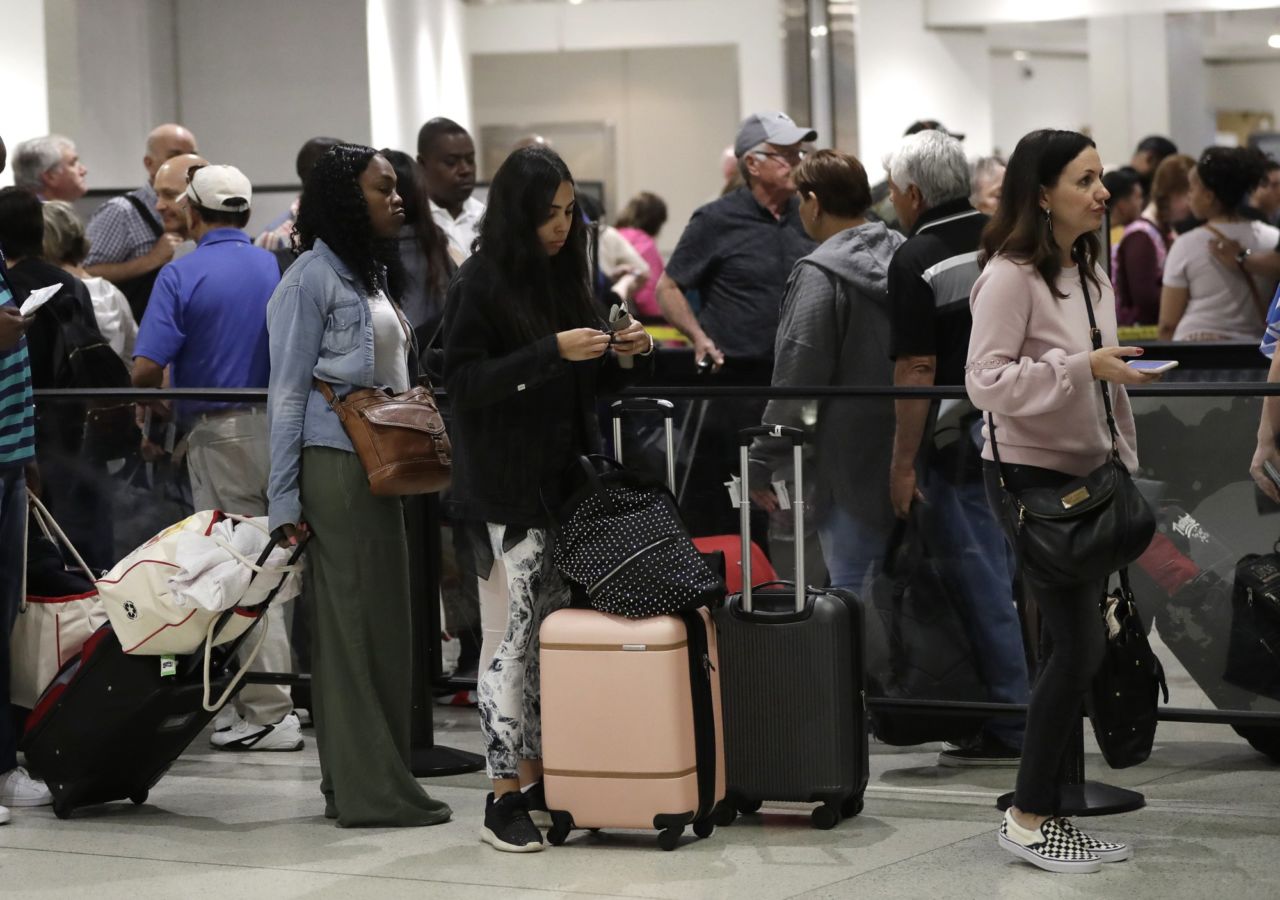 You and your loved ones aren’t federal employees or contractors, and you don’t live in a setting or have a job closely tied to government programs. So what does the government shutdown have to do with you?

More than you might think. Washington’s doings, or not-doings, can be woven into everyday American life from a bowl of breakfast cereal to a bottle of beer after work.

The budget standoff between President Donald Trump and congressional Democrats is rippling into some unexpected places.

It’s being deluged with telemarketing calls, but she can’t get added to the National Do Not Call Registry. It is unavailable during the stalemate.

“It’s turning into an every-15-minute reminder that the government is shut down,” the Oakland, California, high school English teacher says.

“I feel bad because I know so many other people are being affected by the shutdown in so many more devastating ways, but this is just one way that didn’t even cross my mind.”

Here’s a look at some more ways:

Caitlin Hilbert was enjoying some poke, the Hawaiian marinated raw fish dish, last week when the shutdown made her stop chewing.

It occurred to her that the Food and Drug Administration, which oversees seafood safety, had suspended routine inspections.

The agency said last Monday it was bringing workers back to resume checks of seafood and other “high-risk” items. Still, the moment made Hilbert reflect on the links between Washington and her life in San Mateo, California.

“I want to be able to consume food without worry,” the college student and illustrator says.

The FDA oversees about three-quarters of the food supply, from fresh vegetables to dry cereal. The agency conducts about 8,400 domestic-food inspections a year, about a third involving “high-risk” food.

The agency said some checks — on imported food, for instance — have continued through the shutdown; so have U.S. Department of Agriculture inspections of meat and poultry.

To be sure, inspectors don’t normally examine every morsel Americans eat, and plenty of food is safe.

“The odds that you, as a consumer, will go in and pick up a box of food that was affected by the shutdown are low,” says Sarah Sorscher, deputy director of regulatory affairs at the Center for Science in the Public Interest, a food safety advocacy group. “But particularly as the shutdown goes on, the chances increase that someone in America is going to get sick who wouldn’t have gotten sick, because of the shutdown.”

After enduring past shutdowns as a federal worker, Atlanta retiree David Swan hoped he wouldn’t feel the effects of this one.

Then he tried to look at an identity theft complaint he filed with the Federal Trade Commission in 2017, after his personal information was compromised in a data breach and he learned that someone checked into a hotel under his name.

Swan recently got an email saying his FTC account would be deactivated if he didn’t log in, but the system is offline because of the shutdown. (The commission does say accounts aren’t being deactivated in the meantime.)

The shutdown is showing up in school cafeterias in North Carolina’s rural Vance County, which plans to start paring student lunches this week.

Fresh produce will be nixed in middle and high schools and reduced in elementary schools, and lunchrooms will stop offering bottled water and juice, among other changes announced in a Facebook post this week. Ice cream will be gone, too.

The USDA assures that school lunch programs have funding through the end of March. But the Vance County school system said it’s trying “to conserve food and funding” in a district where most students come from families with incomes low enough to qualify them for free or reduced-price lunch. Federal money pays for 95 percent of its school nutrition program.

“All indications are that as far as food supply and funding, we are OK through March. But beyond that, we really don’t know,” so administrators want to stretch what they have, spokeswoman Terri Hedrick said.

The USDA said in a statement Thursday that officials “understand that the current lapse in appropriations creates uncertainty for the future,” but they’re hopeful the budget stalemate will end soon.

Tax Day isn’t until April, but some of Mindy Schwartz’ accounting clients are anxious to contact the IRS now. They’ve gotten notices citing issues with past returns and saying the clients owe money.

Normally, Schwartz calls up a special Internal Revenue Service number for tax professionals to get to the bottom of notices like this. But the line is now answered only by a message saying help “is not available at this time.”

Help may be on the way: The IRS said was recalling about 46,000 of its employees, over half its workforce, as the official start of tax season approaches Jan. 28. The agency said workers would start staffing some phone lines “in the coming days.”

For the moment, Schwartz’s concerned clients can only ponder whether to wait to get through, and perhaps risk penalties and interest, or pay what the IRS says they owe, even if they believe there’s an error.

“Getting communications from the IRS tends to freak people out, so when you can’t get them an answer, it gets a little scary,” says Schwartz, of Carlsbad, California.

Jennifer Lyon-Weisman isn’t a worrier by nature. But she headed for the airport in Columbus, Ohio, over three hours before her Friday afternoon flight.

She lives only 15 minutes away, but she didn’t want to take chances on her annual trip to a fundraising music festival in New Jersey. She’d heard reports of long lines and closed checkpoints at some airports, starting last weekend, after absenteeism spiked among now-unpaid federal security screeners.

The sick-out rate has eased a bit, and the Transportation Security Agency said less than 6 percent of flyers nationwide waited more than 14 minutes in checkpoint lines as of Thursday.

But with a holiday weekend likely to boost crowds, Lyon-Weisman was concerned.

“And then I feel guilty because people aren’t being paid, and it’s a really small problem,” said Lyon-Weisman, a barber.

In the end, the airport crowds were light and screening went swiftly, she said.

While security screeners and air traffic controllers have been told to keep working, Federal Aviation Administration safety inspectors weren’t, until the agency began recalling some Jan. 12.

About 2,200 of the more than 3,000 inspectors are now on the job, overseeing work done by airlines, aircraft manufacturers and repair shops. The government says they’re doing critical work but forgoing such tasks as issuing new pilot certificates.

Meanwhile, passengers will probably have to wait a bit longer to check out Delta’s newest jet model, a 109-seater the airline says has “among the widest seats” among single-aisle planes. CEO Ed Bastian said the Jan. 31 launch date will likely be pushed back because of certification delays amid the shutdown.

Some college students and their families are also contending with shutdown woes as they try to get tax information for financial aid applications.

With IRS phone lines and offices closed, some have struggled to get verification and documents they need to apply. The shutdown doesn’t affect the aid itself, but the Department of Education acknowledges that some “systems and processes depend on information from_and actions taken by_other federal agencies, several of which are currently closed.”

Reynold Verret, the president of Xavier University of Louisiana, says some students at his Catholic, historically black New Orleans school have been caught up in the quandary.

“We’re not exceptional. Every university in the United States right now is probably facing that, as well,” he said.

Money isn’t the only thing that’s not flowing during the shutdown. Some craft breweries are postponing new beer releases or expansions because they need permission from a federal agency that isn’t open.

Such breweries tend to offer new seasonal and special brews frequently, and new beer labels need the Alcohol and Tobacco Tax and Trade Bureau’s approval to be sold across state lines.

Milwaukee-based Lakefront Brewery, for one, has upcoming cherry lager and apple ale releases that could be delayed while it waits for the label-approval process to resume. Some other breweries have new locations idling while waiting for permits from the bureau.

“To me, it kind of drives home to everybody what’s all happening and how many people are affected,” says Russ Klisch, Lakefront’s founder and president. “The government does touch everyone’s life, one way or another.”