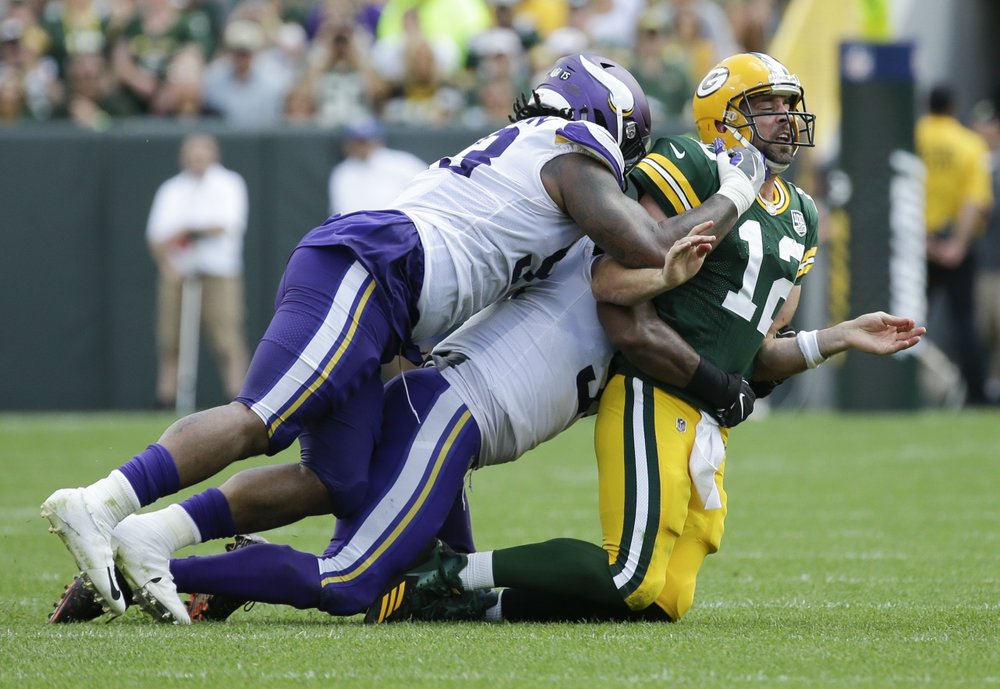 MINNEAPOLIS (AP) — The final weekend of November has arrived, with this Green Bay-Minnesota game predictably carrying plenty of weight toward the race for the NFC playoffs.

The twist, though, is the Packers and Vikings are stuck in the thick of the wild-card mix. The Bears, having beaten the Vikings last week, are the team with a healthy lead in the NFC North, which has been won only by Green Bay (five) or Minnesota (two) since Chicago’s last division title in 2010.

“I definitely didn’t expect to be sitting where we’re sitting, but our record is what it is,” Packers quarterback Aaron Rodgers said. “Obviously, Minnesota has a strong team. They’re probably surprised where they’re sitting as well. So I don’t think either of us is out of the division race.”

“Maybe it will help us, and maybe it’ll hurt us, too,” Vikings coach Mike Zimmer said. “I don’t really know.”

The Packers will play three of their final five games at home, which is helpful because they’ve yet to win on the road this year. They’ll have a more-mobile Rodgers than in their last matchup with the Vikings, when he was grinding through a knee injury.

“He looks like his old self, unfortunately,” Zimmer said.

If the Vikings beat the Packers at home for the third straight time, they’ll at least own a tiebreaker over their biggest rival. They’d still be 1½ games behind the Bears, though, with a difficult stretch of the schedule ahead.

Here are some other key angles to follow with the game:

The Vikings are playing in the NFL’s premier Sunday night slot for the second straight week, triggering a magnification of their struggles with the bright lights on this season. They’ve lost all three of their night games, in Los Angeles to the Rams on Sept. 27, at home against the New Orleans Saints on Oct. 28. and at Chicago last week. The Rams, Saints and Bears boast the top three records in the NFC, a combined 28-5.

“I guess we’re just playing good teams,” Zimmer said. “That might be the real factor.”

Cousins has a 4-12 career record as a starter when kickoff is in the evening, though he has a 68 percent completion rate with 31 touchdowns and 16 interceptions and an average of 305 passing yards in those 16 games.

“It gets a little bit convoluted when you try to look at a stat and pair it with a player,” Cousins said. “It becomes maybe a bigger, more complicated picture than just a win-loss record and trying to judge performance.”

The Packers are 19th in the NFL with a 38 percent conversion rate on third down. They’re up against a Vikings defense that leads the league on third downs, allowing the chains to move only 28 percent of the time.

One problem for the Packers has been the absence of wide receiver Randall Cobb, long one of Rodgers’ most reliable options. He has missed half of Green Bay’s games with a hamstring injury, including the last two contests, but he could return to action Sunday.

Outside linebacker Nick Perry missed Green Bay’s last game at Seattle, but third-year backup Kyler Fackrell made his absence moot with three sacks, his second such performance this season. Fackrell has eight sacks this year, more than starters Perry and Clay Matthews combined.

“The more you play, the more you get comfortable with it, the less encumbered you are with the thinking part,” defensive coordinator Mike Pettine said.

JONESING FOR THE BALL

Packers running back Aaron Jones didn’t play against the Vikings earlier this season because of a suspension for violating the NFL’s substance abuse policy. Jones has 342 rushing yards and four touchdowns over the last four games, plus 12 receptions for 100 yards and a score. He’s the league leader in yards per rush with an average of 6.4.

Vikings safety Andrew Sendejo will miss his sixth straight game because of a groin injury, but Anthony Harris has capably filled in as the starter in the previous two games. He had two interceptions against the Bears.

“I’m just coming in each day preparing like I’m going to be out there every snap and just trying to take advantage of any opportunities given,” Harris said. “So each year, I’ve just been trying to take strides in getting better and increase my role and help this team win.”

Harris signed with the Vikings in 2015 as undrafted rookie out of Virginia. Zimmer praised his progress with becoming more of a physical player as well as gaining a better understanding of the system.