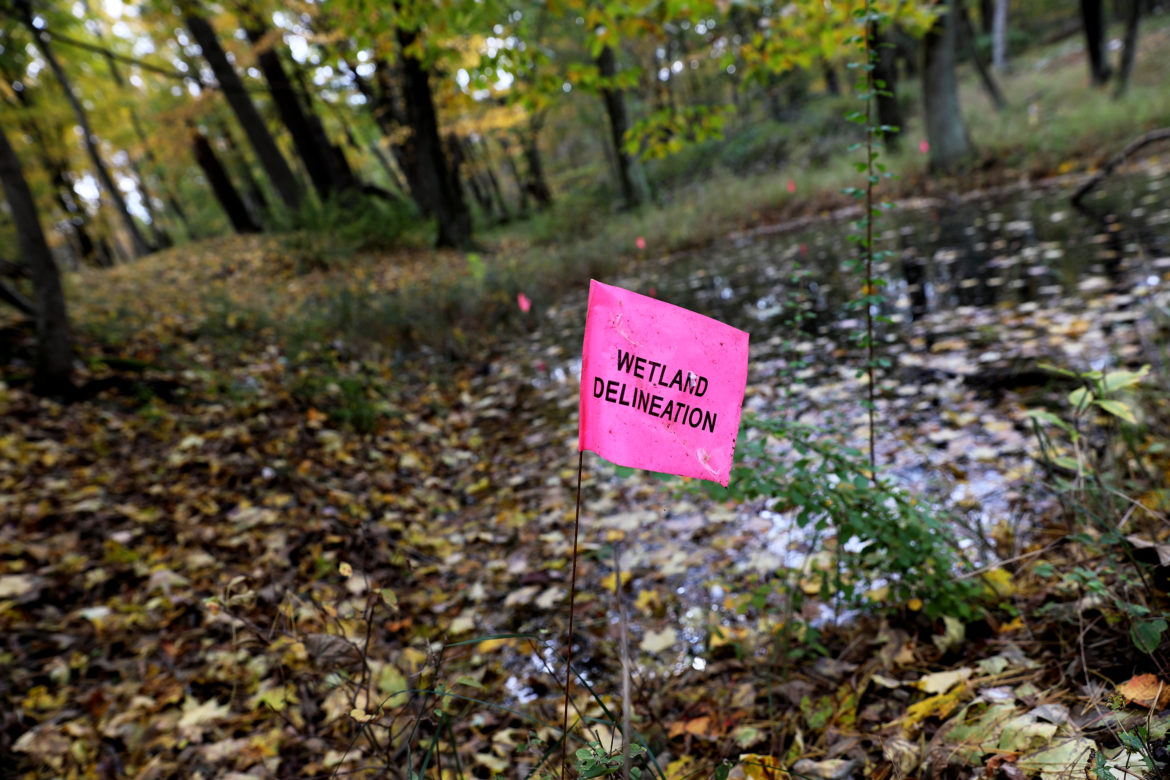 SHEBOYGAN, Wis. (AP) — “Here’s our thistle! This is a rare, very rare plant,” retired wetland ecologist Pat Trochlell exclaimed as she stood at the edge of Lake Michigan on a clear, windy and unseasonably cool day in October.

“You can see the leaves are just, really incredibly beautiful,” she said, pointing to the fuzzy blue-green leaves of Pitcher’s thistle, a federally endangered plant that grows on sand dunes near the shore in Wisconsin’s Kohler-Andrae State Park.

“I shouldn’t be standing on these. These are really sensitive here,” she added.

While it may not look like much at first glance, to Trochlell’s trained eye, this is a rare and fragile dune system of global significance. The dunes are held together without soil by roots, supporting several threatened species of plants and insects.

The nonprofit news outlet Wisconsin Center For Investigative Journalism provided this article to The Associated Press through a collaboration with Institute for Nonprofit News.

Trochlell, who retired in January after 37 years with the state Department of Natural Resources, leads the way down a cleared path, away from the beach and through the nearby woods, past a security camera posted to a tree. The trail separates the state park from scattered wetlands, crucial for amphibian nesting, on property owned by Kohler Co.

According to the Wisconsin Wetlands Association, statewide there are just 10 such sites, all of them small, which contain both interdunal and ridge-swale wetlands.

Trochlell has surveyed the Kohler property three times as an ecologist for the DNR, most recently after the company proposed building a public 18-hole golf course on a 247-acre site adjacent to the state park.

Her impression: “I was thinking this is one of the most special places I have ever been.”

DNR’s final environmental impact statement for the project from January states that of the 5 acres of “very rare” and “imperiled” Great Lakes Ridge and Swale wetlands on the Kohler site, about 1.5 acres would be filled to build the golf course and others will experience “secondary impacts.”

Trochlell said the DNR completed its environmental assessment before seeing detailed plans from Kohler — backward of the normal process. She assumed Kohler’s request for a wetland permit, required to build the golf course, would never be granted. She was wrong.

The agency approved the permit for the project, which would also require removal of up to 120 acres of forest. Trochlell believes the loss of trees, installation of fertilized turf and other changes would negatively affect the area’s dunes and wetlands.

Trochlell determined the project did not meet state standards. But she said her bosses told her the permit should be approved no matter what.

Gov. Scott Walker’s office directed questions about the Kohler project to the DNR. The department declined a request for an interview, citing ongoing litigation, which has stalled the project. DNR spokesman Jim Dick said the agency “makes permit application decisions based on law and sound science.”

Jim Buchholz, who worked for the DNR for more than 36 years, including 28 years as Kohler-Andrae’s park superintendent, said in testimony in June that the approval allows “destruction of rare, globally significant wetland areas” and “does not follow the agency’s own wetland preservation standards.”

Kohler Co. is known for its bathroom fixtures, golf courses and the five-star American Club in the village of Kohler. In the 1930s, the company purchased 468 acres of land along Lake Michigan in Sheboygan County, and donated nearly half to what is now the Kohler-Andrae State Park. The rest of the land is now slated to be a golf course.

The facility will include an irrigation pond, golf cart paths, a clubhouse of up to 16,000 square feet, a 22,000-square-foot maintenance building and an entry road.

“We remain committed to implementing a plan that will avoid, minimize and mitigate potential impacts from the public golf course,” Dirk Willis, Kohler’s group director of golf, said in a statement.

The company promises to remediate destroyed wetlands through programs that allow it to sponsor the restoration or creation of wetlands elsewhere.

In addition, “All Lake Michigan near shore wetland resources are being avoided, including interdunal wetlands,” the company said in its 2017 permit application.

Kohler hopes the project will become one of the world’s top golf courses. A consultant hired by Kohler projects the course would bring nearly $21 million a year in economic activity to Sheboygan County, create 227 permanent jobs and generate $1.1 million in annual tax revenue.

To pave the way for the project, the Wisconsin Natural Resources Board approved a swap of 4.6 acres of state parkland and a nearly 2-acre easement for 9.5 acres of Kohler property with a house and several storage buildings.

As Buchholz walks through the park he ran for nearly three decades, through sandy dunes and old growth forest, he points out the land to be traded to Kohler. He believes the swap of state park land creates a bad precedent.

Trochlell believes that under the Kohler Co. plan, the rare wetlands will become overrun by invasive species, and standing water will be polluted by the nutrients from fertilizer.

“Our whole ecosystem is based upon having species that interact with each other. When you lose one part of that, we don’t know how it’s going to affect all the other parts,” she said.

An archaeological study of the Kohler Co. property found over 25,000 historic and prehistoric artifacts, including stone tools and ceramics dating back more than 3,000 years. In addition, a group of Native American burial mounds exists on the site; Kohler says they will not be disturbed.

Lawsuits filed against the DNR by the environmental nonprofit, Friends of the Black River Forest, have challenged both the granting of the wetland permit and the swap of state land.

According to the Wisconsin Democracy Campaign database, top Kohler employees have donated $43,500 to Walker’s campaigns since 2009. The Kohler family, including chairman Herbert V. Kohler Jr., is worth $6.8 billion, according to Forbes.

To DNR veterans, businesses seeking influence with Wisconsin’s environmental agency is not new. What has changed, they say, is how the department responds.

“What DNR is doing is behind closed doors, rewriting the law but directing staff to ignore what the standards are and issue permits that are contrary to those standards,” said George Meyer, who served as DNR secretary from 1993 to 2001 under two Republican governors and now leads the Wisconsin Wildlife Federation.

He said that the Kohler decision sends “a signal to staff that . their decision could be overridden at any time depending on who the applicant is and what kind of political connections they have.”

As an attorney working on surface water and wetland issues for the DNR for 34 years, Michael Cain was behind the adoption of some of the most stringent wetland laws in the country. In recent years, the state Legislature has reduced some of those protections.

Cain, who retired in 2010, said during his time at the department, staff were supported in enforcing the law even in the face of pressure from politicians and “people with money.”

Said Cain: “I had the capacity to walk down the hall to the secretary’s office and knock on the door and sit down and say ‘This is what we need to do to comply with the law,’ and I was never told, ‘We can’t do that, we won’t do that.’”

At the Charcoal Inn South in Sheboygan, while some customers did not want to talk about the project, 37-year-old cook Steven Lilyquist weighed in.

“Honestly, I’m not really particularly for or against it. I mean, golf is a great thing. It’s a great sport,” Lilyquist said. “As long as we’re not endangering a bunch of animals and everything, I say go for it.”

A drive through the village of Kohler, past the design showroom of bathroom fixtures, past the Kohler Waters Spa and the American Club hotel, offers glimpses into a well-manicured community. At the Woodlake Market grocery store near the center of town, a group of Kohler Co. landscaping employees stops to pick up snacks during a break.

Randy Demaster, a seasonal landscaper for Kohler who has helped to build several other Kohler golf courses, believes most people in the area support the project, in part because of the tax revenue it would bring in. And he expects the course to have little to no negative environmental impacts.

“They (Kohler) are very concerned and conscientious about the environment,” Demaster said. “That’s why they are trying to keep everything in place as much as possible and work around it.”

A few times a week, Mary Faydash walks along the beach south from her home in the town of Wilson through Kohler-Andrae to visit the shore and the forest of birch trees interspersed with evergreens where she sees foxes running and bald eagles flying.

“To me and to many people in Wilson, it’s a sacred place,” the retired teacher said.

Over the past four years, Faydash has become self-taught in the ecology of the landscape, the details of Kohler’s application and what she sees as the politics of its approval.

Faydash organized opposition to the project through her group, Friends of the Black River Forest, named after the nearby river. Administrative and court challenges in Dane and Sheboygan counties to the wetland permit, the environmental impact statement and the land swap have halted the project for now.

Said Faydash: “A billionaire feels that they can run roughshod over not only our rights, but our health. I don’t think . you can destroy an ecosystem which is very rare because you can afford to.”

BY SARAH WHITES-KODITSCHEK of Wisconsin Center For Investigative Journalism.