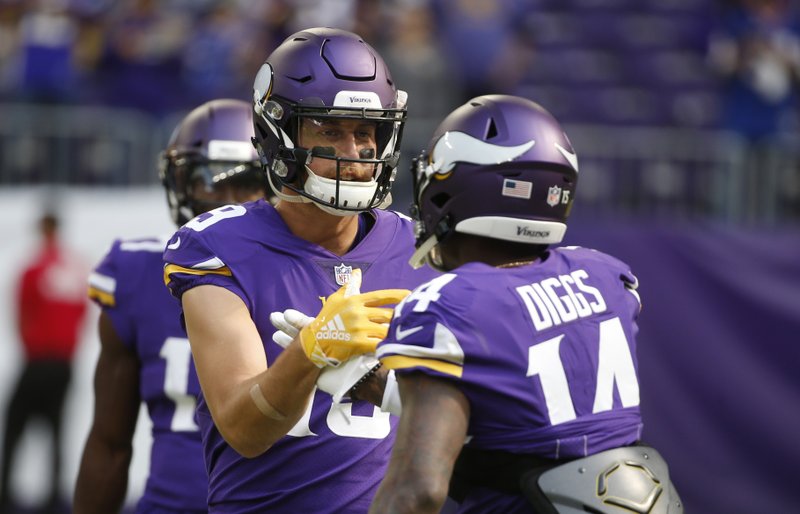 Just past the midpoint of the schedule for the Vikings, Thielen leads the NFL in receptions (78) at a pace that would fall four short of the all-time single-season mark (143). He leads the league with 947 yards. Kirk Cousins, the new prize quarterback with the annual $28 million salary cap hit, without prompting recently called Thielen the best player on this standout-laden team.

The accolades of this magnitude might not exist for Thielen, though, without Stefon Diggs.

Thielen and Diggs are the only teammates currently in the top 10 in the league in catches, on pace for a combined 242. That would break the record for receptions by a pair of teammates, set in 1995 by Herman Moore and Brett Perriman for Detroit with 231.

Opposing defenses are naturally less likely to apply double coverage on Thielen when Diggs is in a pattern at the same time, as evidenced by contrast in a victory over the Lions last week . With Diggs sidelined by a rib injury, Thielen didn’t have much space. He used one of his textbook double moves to beat cornerback Nevin Lawson for a short touchdown , his seventh of the year, but he finished with only 22 yards for his lowest total since the 2016 season.

The mutual benefit of this dominant wide receiver duo, though, began on the practice field years ago.

“We’re always competing, we’re always having fun, and we’re always giving each a hard time if we’re not performing at the level we know we can,” Thielen said.

If Thielen makes a catch in practice, Diggs will often make it a point to create even more separation from the defender the next time he’s assigned to run the same route. That, in turn, frequently triggers playful yet spirited banter between the two.

“He’s my brother. He’s a guy I love messing with, love having fun with,” Thielen said. “He’s even one of my best friends.”

At a position that has long produced some of the NFL’s biggest personalities, in some cases breeding a disruptive brand of selfish and boorish behavior, Thielen and Diggs are the anti-divas. Part of that is a product of their route, no pun intended, to the league.

Thielen was the NCAA Division II player who went undrafted and needed a rookie tryout camp to make the team five years ago. He didn’t become a full-time starter until 2016. Diggs was the fifth-round draft pick who was a healthy scratch for his first three NFL games in 2015.

“All the cute stuff, like records being broken and stuff like that, you like it and it’s good to hear, but we always want to win,” Diggs said. “We worry about the win column more than anything. So to see good things happen? Yes, it’s exciting. Yes, you congratulate your guys, because guys work extremely hard, you know? So it’s always good stuff, and it’s good stuff moving in the right direction, but we want to win.”

The Vikings (5-3-1) have been doing that more lately after a rough first quarter of the season, entering their bye week a step behind Chicago (5-3) in the NFC North, with a prime-time matchup with the Bears up next on Nov. 18.

Cousins has been as advertised, ranking in the top 10 in the league in most of the passing categories, including third in completion percentage despite being prone to a costly turnover here and there. The offensive line has again shown vulnerabilities, though, and the Vikings have averaged the fourth-fewest rushing yards in the league.

Thielen and Diggs have been all the more valuable to the Vikings this fall, with an assist by new offensive coordinator John DeFilippo for aggressive and creative play calling that has helped spring them open so much.

“He uses his playmakers, and he just lets them play. So I admire that, and I appreciate that,” Diggs said. “As a player you just want to do the best that you can, and it’s good that he plays to your strengths.”

The defense, which led the NFL in fewest yards and points allowed last year, was surprisingly one of the biggest problems in September. After that humbling loss in Los Angeles to the Rams dropped the Vikings to 1-2-1, though, coach Mike Zimmer has helped steer the group back into dominant form.

With daunting road trips to Chicago, New England and Seattle looming over three of the next four games, the pressure will be on the offense to do its part.

“When you look at it glass half-full, I’m thrilled about our locker room, the chemistry we have on this team, the quality of teammates, the quality of leadership we have in this organization. I think all that has probably even exceeded expectations from me,” Cousins said. “Certainly would have loved to be better than 5-3-1, but I’m grateful we’re not 3-5-1. You can look at it both ways. The point is, we keep saying, everything is in front of us.”