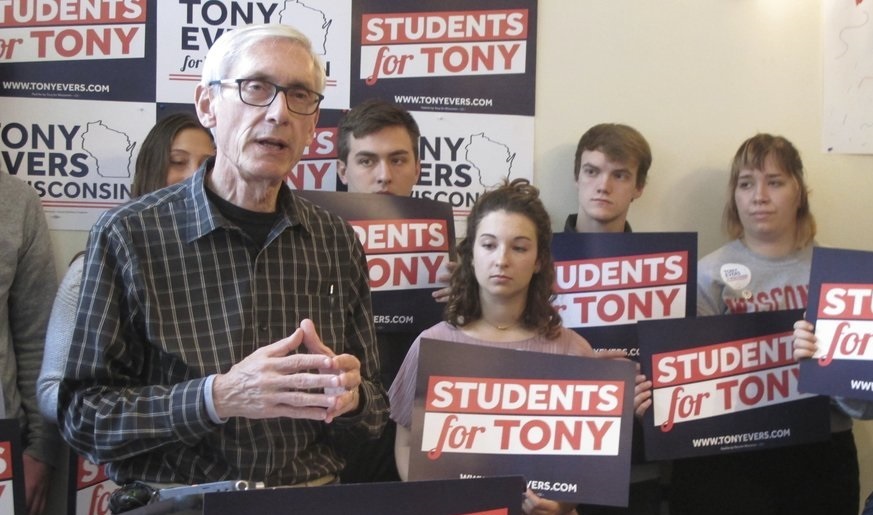 MADISON, Wis. (AP) — Democratic candidate for governor Tony Evers said Monday that if elected he would be open to toughening licensing requirements for Wisconsin’s concealed carry law, a measure signed by his Republican rival.

Evers was asked about the 2011 law by reporters seeking reaction to the killing of 11 Jewish people at a synagogue in Pittsburgh. The shooting has generated bipartisan condemnation across the country and in Wisconsin.

Gov. Scott Walker is a gun rights advocate, has the highest A+ ranking from the National Rifle Association and has received $4.25 million in support from the NRA since 2010.

Evers, the state superintendent, has campaigned on his support for universal background checks for gun purchases and banning rapid fire “bump stock” devices, as was used in the Las Vegas shooting last year. That attack left 58 people dead, making it the deadliest shooting in modern U.S. history.

Evers also supports regulating military-style weapons and preventing those on the “no fly” list from buying guns.

Walker opposes universal background checks. Last year in reaction to the school shooting in Parkland, Florida, Walker and the Legislature enacted a $100 million school safety plan. Under the law, the state Department of Justice handed out grant money to schools for a variety of safety enhancements.

When asked Monday whether changes were needed to Wisconsin’s seven-year-old concealed carry law, Evers said: “I’d like to make sure the requirements are tough, for people that get (a permit), but I think it’s working now.”

When asked if more training would be needed, Evers said: “Possibly. I’m not prepared to say. I think it’s a law that was passed with some controversy, but it seems to be working. I just want to make sure the requirements are adequate.”

Walker campaign spokesman Austin Altenburg said the governor does not support any changes to the concealed carry law.

Evers said he was “not prepared to respond to that” when asked whether he agreed with Barnes’ positions on those issues. Republican Lt. Gov. Rebecca Kleefisch last week criticized Barnes on Twitter.

“If @TheOtherMandela had his way, ANY citizen who wanted a concealed carry permit would have to have their head examined,” Kleefisch tweeted Thursday. “Since when do you need a doctor’s note to exercise your constitutional rights? Again: Failed leadership.”

Wisconsin was the 49th state to enact a concealed carry law when Walker signed it in his first year in office. Under the law, there are many ways for an applicant to satisfy the training requirement.

They must provide one of the following: a copy of a hunter education certificate from the Wisconsin Department of Natural Resources or an equivalent agency from another state; a concealed carry license from another state; documentation of small arms training while serving in the U.S. military or reserves; a letter from the state Law Enforcement Standards Board or from a police department stating the applicant served as a police officer; or a certificate of completion of a firearms safety or training course by a national or state organization that certifies firearm instructors. Such a certificate must include the completion date and the instructor’s name.

As of this weekend, there were about 348,000 valid concealed weapons permits in Wisconsin, according to the state Department of Justice.