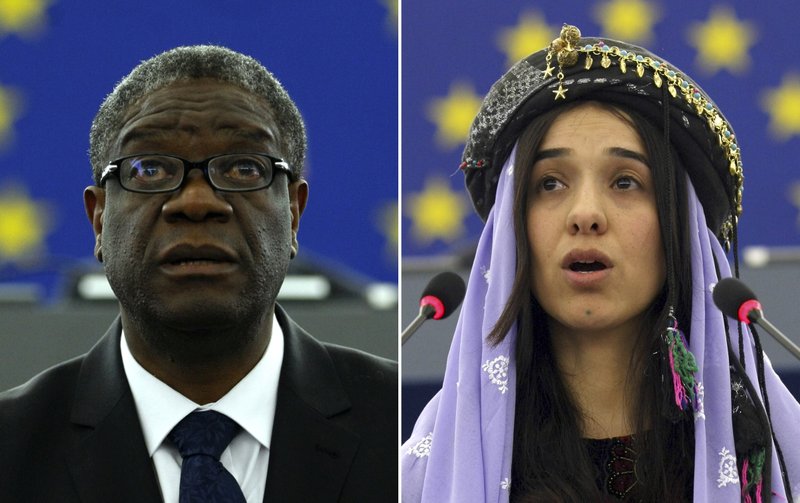 OSLO, Norway (AP) — Raped after being forced into sexual slavery by the Islamic State group, Nadia Murad did not succumb to shame or despair — the young Iraqi woman spoke out. Surgeon Denis Mukwege treated countless victims of sexual violence in war-torn Congo and told the world of their suffering. Together, they were awarded the Nobel Peace Prize on Friday for their campaigns to end rape and sexual abuse as weapons of war.

“Dear survivors from all over the world, I would like to tell you that, through this Nobel Prize, the world is listening to you and refusing indifference,” Mukwege, 63, told a news conference outside the hospital he founded in Bukavu in eastern Congo, where he has treated tens of thousands of victims — among them “women, teenage girls, small girls, babies,” he said Friday.

“The world refuses to remain idle with arms crossed facing your suffering. We hope that the world will not put off acting with force and determination in your favor because the survival of humanity depends on you,” Mukwege said.

Murad, 25, was one of an estimated 3,000 girls and women from Iraq’s Yazidi minority group who were kidnapped in 2014 by IS militants and sold into sexual slavery. She was raped, beaten and tortured before managing to escape three months later. After getting treatment in Germany, she chose to speak to the world about the horrors faced by Yazidi women, regardless of the stigma in her culture surrounding rape.

File – In this Monday, May 22, 2017 file photo, Human rights activist Nadia Murad a Yazidi former captive of the Islamic State group,  speaks during an interview with The Associated Press at the International Center in Vienna, Austria. Denis Mukwege and Murad have been named winners of the Nobel Peace Prize, it was announced on Friday, Oct. 5, 2018. (AP Photo/Ronald Zak, File)

In 2016 she was named the United Nations’ first Goodwill Ambassador for the Dignity of Survivors of Human Trafficking, and her advocacy helped spur a U.N. investigation that is collecting evidence of war crimes by Islamic State extremists.

In a statement, Murad said she was “incredibly honored” by the prize.

“As a survivor, I am grateful for this opportunity to draw international attention to the plight of the Yazidi people who have suffered unimaginable crimes since the genocide” by IS, she said. “Many Yazidis will look upon this prize and think of family members that were lost, are still unaccounted for, and of the 1,300 women and children, which remain in captivity.”

This year’s peace prize comes amid heightened global attention to the sexual abuse of women — in war, in the workplace and in society — that has been highlighted by the #MeToo movement.

Denis Mukwege, center, celebrates with his staff after learning he has been awarded the 2018 Nobel Peace Prize, at the Panzi hospital in Bukavu, eastern Congo, Friday, Oct. 5, 2018. Mukwege, 63, founded the hospital and has treated thousands of women, many of whom were victims of gang rape. Armed men tried to kill him in 2012, forcing him to temporarily leave the country. “The importance of Dr. Mukwege’s enduring, dedicated and selfless efforts in this field cannot be overstated. He has repeatedly condemned impunity for mass rape and criticized the Congolese government and other countries for not doing enough to stop the use of sexual violence against women as a strategy and weapon of war,” the Nobel committee said in its citation Friday. (Norwegian Church Aid via AP)

“#MeToo and war crimes are not quite the same thing, but they do, however, have in common that it is important to see the suffering of women,” said Reiss-Andersen of the Nobel committee.

In the United States, Supreme Court Justice Ruth Bader Ginsburg also noted that the award comes amid a global reckoning over sexual violence. She tweeted a link to the Nobel announcement, saying “the timing of this topic is extraordinary as we fight for the end of #ViolenceAgainstWomen.”

Many of the women treated by Mukwege were victims of mass rape in the central African nation that has been wracked by conflict for decades. He faced great personal risk in doing so: Armed men tried to kill him in 2012, forcing him to temporarily leave the country.

Solange Furaha Lwashiga, a Congolese women’s activist, noted the surgeon’s work repairing not only the physical damage but also the mental scars suffered by the victims, empowering them. “Dr. Mukwege brings smiles and helps repair women from the barbaric acts of men in Congo,” she said.

Mukwege was in surgery — his second operation of the day — when the peace prize announcement came, and he learned about it from patients and colleagues who were crying with joy.

Eastern Congo has seen more than two decades of conflict among armed groups that either sought to unseat presidents or simply grab control of some the central African nation’s vast mineral wealth.

“The importance of Dr. Mukwege’s enduring, dedicated and selfless efforts in this field cannot be overstated. He has repeatedly condemned impunity for mass rape and criticized the Congolese government and other countries for not doing enough to stop the use of sexual violence against women as a strategy and weapon of war,” the Nobel committee said.

Murad’s book, “The Last Girl,” tells of her captivity, the loss of her family and her eventual escape.

The Yazidis are an ancient religious minority, falsely branded as devil-worshippers by Sunni Muslim extremists. IS, adopting a radical interpretation of ancient Islamic texts, declared that Yazidi women and even young girls could be taken as sex slaves.

Iraqi President Bahram Saleh praised the award for Murad, saying on Twitter that it was an “honor for all Iraqis who fought terrorism and bigotry.”

Congo’s government congratulated Mukwege, while acknowledging that relations with him have been strained because of his criticism of the government.

In a statement, President Joseph Kabila’s special representative said: “We are proud that the fight and initiatives led by (Democratic Republic of Congo) through Dr. Mukwege, for the re-establishment of the dignity and the respect of women is finally recognized internationally.”

In other Nobel prizes this year, the medicine prize went Monday to James Allison of the University of Texas and Tasuku Honjo of Kyoto University, whose discoveries helped cancer doctors fight many advanced-stage tumors and save an “untold” numbers of lives.

Scientists from the United States, Canada and France shared the physics prize Tuesday for revolutionizing the use of lasers in research.

On Wednesday, three researchers who “harnessed the power of evolution” to produce enzymes and antibodies that have led to a new best-selling drug won the Nobel Prize in chemistry.

The winner of the Nobel Memorial Prize in Economic Sciences, honoring Alfred Nobel, the founder of the five Nobel Prizes, will be revealed on Monday.

No Nobel literature prize was awarded this year due to a sex abuse scandal at the Swedish Academy, which chooses the winner. The academy plans to announce both the 2018 and the 2019 winners next year — although the head of the Nobel Foundation has said the body must fix its tarnished reputation first.

The man at the center of the Swedish Academy scandal, Jean-Claude Arnault, a major cultural figure in Sweden, was sentenced Monday to two years in prison for rape.