Endorsement shake up Wisconsin's governor race; one candidate drops out 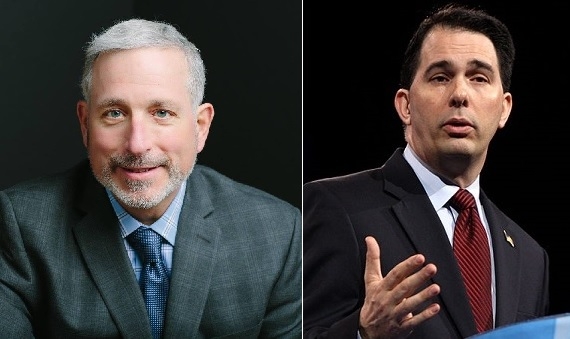 MADISON, Wis. (AP) — Democratic gubernatorial candidate Tony Evers won the endorsement of Republican Gov. Scott Walker’s former prisons chief on Thursday and one of Evers’ nine Democratic competitors dropped out, a shake-up in the race that comes less than two months before the Aug. 14 primary.

Andy Gronik, a Milwaukee businessman whose yearlong campaign never caught fire, dropped out the day after a poll showed Evers with a double-digit lead over the rest of the field. Gronik did not endorse anyone but did cited Evers’ strong standing in the Marquette University Law School poll and urged Democrats to coalesce around a candidate who can beat Walker.

Evers, who is Wisconsin’s public schools superintendent, picked up the backing of Walker’s disgruntled former Corrections Department Secretary Ed Wall — who worked four years for Walker before resigning as prisons chief and then being fired by the state Justice Department two months later after advocating the shredding of public records.

By endorsing Evers, Wall renewed his public criticism of Walker’s handling of the investigation into the Lincoln Hills juvenile prison, which is about 30 miles north of Wausau. Wall’s tell-all book about his experiences working for the two-term Republican is due out in August.

Wall was responsible for running the juvenile prison as Corrections Secretary from 2012 to 2016, when he resigned as news of a federal investigation into troubles at the prison came to light. Wall has downplayed his role in the troubles there.

Walker spokeswoman Amy Hasenberg said claims made by Wall in the campaign video are “blatantly false and that is confirmed by both chiefs of staff who interacted with Mr. Wall.”

In the campaign video for Evers, Wall repeats his contention that he presented Walker’s staff with multiple plans for improving conditions but was rebuffed.

“Scott Walker completely mismanaged the issues at Lincoln Hills,” Wall said in the video. “I thought Scott Walker would help us protect kids, but I was wrong.”

Wall alleges that Walker’s then-chief of staff said that Walker was having trouble raising money because of negative stories about Lincoln Hills. Wall also contends that it was “strongly suggested” that no written records related to Lincoln Hills be created so there would be no “paper trail.”

But Wall said in a December 2015 email that throughout his career in state government, including in Walker’s administration, “I’ve never been instructed not to use my government phone or email for correspondence.”

The email, provided to The Associated Press through an open records request Thursday, was sent by Wall’s spokeswoman to the governor’s press office in reaction to a story in the Capital Times about Walker’s policy on public records.

Wall declined to comment Thursday beyond his endorsement announcement. In a statement, Wall said he was endorsing Evers “because we need a governor who is a true leader – an adult in the room, who unlike Scott Walker, will put Wisconsin before his own political ambitions.”

Walker in March signed a bill that passed with unanimous support in the Legislature to close the Lincoln Hills prison by 2021. Earlier this month, Wisconsin prison officials reached a legal settlement to end a federal lawsuit that enacts widespread changes in disciplinary tactics at the prison. The state in March reached an $18.9 million settlement with one former juvenile inmate who suffered brain damage after she tried to hang herself in her cell.

After resigning as prison chief in 2016, Wall returned to work for the state Justice Department for two months before being fired for advocating to Walker’s chief of staff that he shred public records.

The Marquette poll released Wednesday found that Evers was the best-known among all of the Democratic candidates, but 61 percent still said they didn’t know enough about him to form an opinion. Marquette surveyed 800 registered voters between June 13 and Sunday. The poll has a margin of error of plus or minus 4 percentage points.