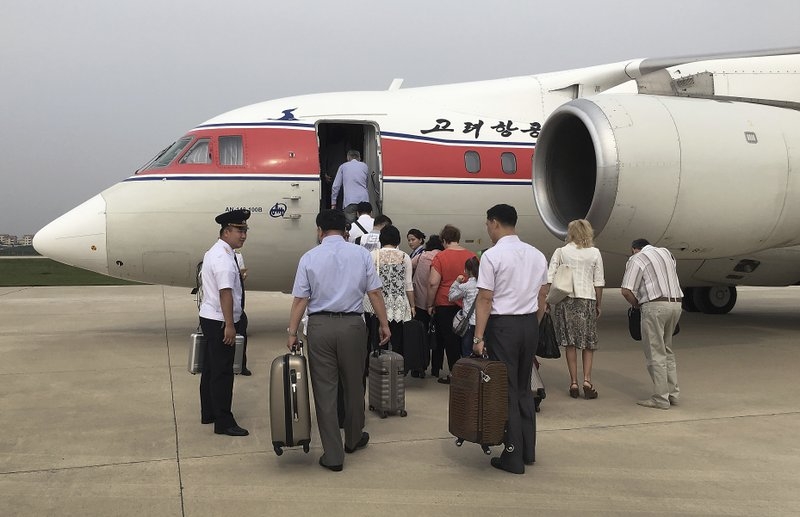 Amid the toughest sanctions ever against the North and its nuclear weapons program, there are some compelling reasons to believe the answer may well be yes. The story of how — and why — offers some insight into how North Korea’s economy functions under Kim Jong Un.

There’s a fine line between North Korea’s military and its private sector. To augment the already huge share of the country’s limited national resources earmarked for defense, North Korean military units control everything from restaurants to farms to the flagship airline.

Air Koryo is far more than just an airline.

Over the past several years, it has also become one of the country’s most recognizable consumer brands.

With only a dozen or so active-use aircraft operating on limited routes to China and the Russian Far East, it’s hard to imagine it’s ever been much of a money-maker for Pyongyang in the conventional, ticket-sales sort of way. But it is a symbol of national prestige and serves as a key lifeline to the outside world, transporting people and loads and loads of precious — and often not-very-closely-scrutinized — cargo.

Air Koryo runs at least one gas station and car wash in Pyongyang, has its own fleet of taxis and operates several retail shops, including a boutique at the airport. At the relatively upscale Potonggang Department Store in central Pyongyang, whole aisles are devoted to Air Koryo brand products, from crates of liquor to row after row of Coke-like sodas and a half dozen varieties of canned goods, including pheasant soup and canned peaches.

The airline’s moves mirror broader shifts in the North Korean economy, which is still socialist and technically centrally controlled, but under Kim has shifted rapidly toward capitalist-style entrepreneurialism.

At the grassroots level, street vendors and small, bazaar-style markets are common. Higher up, state-run enterprises are adapting to become more productive and profitable — quite possibly because the regime, pinched by sanctions and shrinking trade possibilities, can’t afford to prop them up anymore.

It’s not just Air Koryo: Naegohyang, a major producer of cigarettes including the luxury “7.27” brand reportedly favored by Kim himself, has begun pushing its own line of sporting goods. They’re sold alongside Nike, Adidas and other pricey imports at its flagship stores near Pyongyang’s diplomatic quarter and in the exclusive Scientists’ Street district, a neighborhood built to reward the country’s scientists and technicians.

Air Koryo got a big boost with Kim’s decision to completely overhaul the Pyongyang Sunan International Airport, which opened a shiny new terminal in 2015. The next year, Air Koryo started its taxi service. The Air Koryo soft drink line was launched in 2016. A gas station and car wash followed in 2017.

It’s impossible to say how profitable those initiatives have been. But the swelling variety of the goods and their ready availability in the capital and elsewhere, is undeniable.

The appearance of a subsidiary company, Korea Hanggong Trading, at recent trade fairs suggests Air Koryo may be considering an export business, something of a stretch in the current political climate and sanctions aimed at cutting off the North’s ability to fund its nuclear program.

Curtis Melvin, a researcher at the US-Korea Institute at Johns Hopkins University and editor of the North Korean Economy Watch blog, describes the airline as a “wholly owned subsidiary” of the air force, which is using its consumer goods business to help finance reconstruction of its own infrastructure, including runway renovations and new revetments at remote highway airfields.

Selling Air Koryo-labelled products made by military factories can help the air force boost revenues outside of its official budget allocations, Melvin said.

A new headquarters for Air Koryo has been built near the international airport, he noted.

“For many years, North Korea has tried to turn its subsidy-dependent state-owned enterprises into profitable operations that pay ’taxes,’” he said in an email to The Associated Press. “Maybe Air Koryo’s time has simply come.”

Air Koryo’s connection to the military is not immediately obvious and is often overlooked.

But according to a 2014 United Nations Panel of Experts’ report, the airline, all airports and airfields in North Korea are controlled by the Korean People’s Air Force through its Civil Aviation Bureau. The report added that the airline’s personnel are believed to be members of the air force and “all in-country maintenance is conducted by air force engineering staff.”

That makes it a natural target for sanctions, another incentive for diversification.

Though Washington-backed efforts to blacklist the airline entirely have failed, the U.S. Treasury Department in 2016 slapped sanctions on Air Koryo for doing a fly-over during a 2013 military parade and for transporting spare parts used in Scud-B missile systems, among other things.

The listing does not ban Americans from flying on Air Koryo, but restricts them from doing other kinds of business with it.

The U.N., meanwhile, has warned that “considering the control over and use by the air force of Air Koryo’s aircraft,” member states could be in violation of its arms embargo on the North should they engage with the airline in anything from financial transactions to technical training.