Trump family and associates to be in Russia probe crosshairs 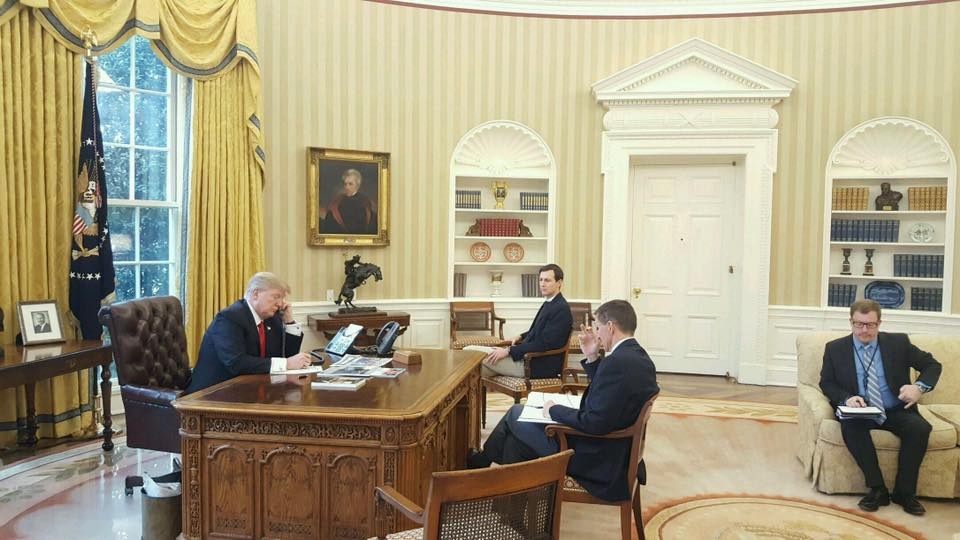 WASHINGTON — A web of President Donald Trump’s family and associates will be back in the crosshairs of congressional committees investigating whether his campaign colluded with Russia, as well as of the high-wattage legal team assembled by special counsel Robert Mueller.

As Congress returns from a summer recess, some of the attention will be focused squarely on the president’s eldest son, Donald Trump Jr., who will meet privately in the coming weeks with staffers on the Senate judiciary and intelligence committees. A meeting Trump Jr. convened with a Russian lawyer and others in the midst of the campaign has already been the subject of testimony before a grand jury that Mueller is using as part of his investigation, The Associated Press has learned.

The expected crush of interviews, subpoenas and testimony this fall underscores both the broad scope of the Russia probes and the certainty that they will shadow Trump’s presidency for months or even years. Even if Trump and his associates are ultimately cleared, some White House advisers worry about the president’s anger over the investigations and the likelihood that he will continue to weigh in publicly in ways that only further distract from his agenda.

The president’s own legal exposure remains uncertain. He’s denied coordinating with Russia during the election or having any nefarious financial ties to Moscow.

But Trump’s legal team, anticipating Mueller’s interest in probing Trump’s firing of FBI Director James Comey, is developing arguments to protect him against any obstruction of justice allegations, including constitutional defenses and a contention that his actions crossed no legal lines.

In a preview of those arguments, Trump attorney Jay Sekulow said constitutional powers authorize the president to fire subordinates who serve at his pleasure.

“The whole idea of an obstruction allegation here, or obstruction of justice charge, is contrary to the Constitution,” Sekulow said.

The simultaneous investigations by Mueller and three congressional committees have drawn in some of Washington’s legal heavy hitters. Mueller’s 16-lawyer team is comprised of seasoned prosecutors with significant experience fighting fraudsters, mobsters and terrorists and with building cases against high-level targets by eliciting cooperation from more peripheral subjects. And more than a dozen Washington law firms have lawyers representing players in the investigation.

Most participants are gearing up for a long haul. Rep. Adam Schiff of California, the top Democrat on the House intelligence committee, said his panel has a “tremendous number of witnesses to get through” in the preparation of a public report.

“We feel a sense of urgency, but we also know it has to be thorough, or it won’t be of much value,” Schiff said.

The coming months may put a new focus on lesser-known players in Trump’s orbit, including Michael Cohen, his long-time lawyer. Cohen acknowledged last month that the Trump Organization pursued a Trump Tower project in Moscow and that he had reached out to the press secretary for President Vladimir Putin. The revelation appeared to undercut Trump’s repeated assertion that his associates had nothing to do with Russia.

Another associate who could appear before Congress this fall is informal adviser Roger Stone, as well as Felix Sater, a Russia-born associate Cohen says he worked with on the Trump Tower deal. The project was later abandoned.

Rep. Eric Swalwell, D-Calif., said the Trump Tower Moscow proposal was a further example of “the constellation of contacts between the Trump campaign and the Russians.” He said he wants the House intelligence committee to hear from everyone involved in the deal as well as those present during the June 2016 Trump Tower meeting even if that list of witnesses overlaps with Mueller’s.

Familiar names will also continue to face scrutiny, particularly former campaign chairman Paul Manafort and ousted White House national security adviser Michael Flynn. Manafort already has spoken privately to Senate intelligence committee staffers, and though other committees are also interested in hearing from him, it’s not clear when or if that will happen.

Senate Judiciary Chairman Charles Grassley has said he wants both Manafort and Trump Jr. to testify publicly at some point.

In July, the FBI raided Manafort’s home seeking tax and international banking records. Manafort has been the subject of a longstanding FBI investigation into his dealings in Ukraine and work for the country’s former president, Viktor Yanukovych. That investigation has been incorporated into Mueller’s probe, and the FBI raid was an indication that the bureau believes it has probable cause that a crime was committed. Manafort has denied any wrongdoing, saying his work for Ukrainian interests was above board.

Flynn, who was forced to resign in February for misleading Vice President Mike Pence about his Russia contacts, remains of particular interest to investigators. A grand jury probe that began in Virginia months ago has been taken over by Mueller’s team, as the FBI investigates lobbying and investigative research performed by his company, Flynn Intel Group, on behalf of a Turkish businessman.

A Washington public relations firm, SGR LLC, confirmed through its lawyer to the AP that it had received a subpoena months ago regarding its role in the Turkish work. The lobbying campaign sought to get Turkish cleric Fethullah Gulen expelled from the U.S. Gulen, a green card holder who lives in Pennsylvania, has been accused by Turkish President Recep Tayyip Erdogan of being involved in a failed coup last year, which Gulen has denied.

A person familiar with the investigation told the AP that FBI agents have been particularly interested in whether the Turkish government was directing the lobbying work and not a private company owned by a Turkish businessman, Ekim Alptekin, as Flynn’s firm has contended. The person spoke on condition of anonymity to discuss the sensitive details of the investigation.

FBI agents have also been asking about Flynn’s business partner, Bijan Kian, who served on Trump’s presidential transition, and other details of the work beyond what Flynn’s firm disclosed to the Justice Department in March when he retroactively registered as a foreign agent, the person said.