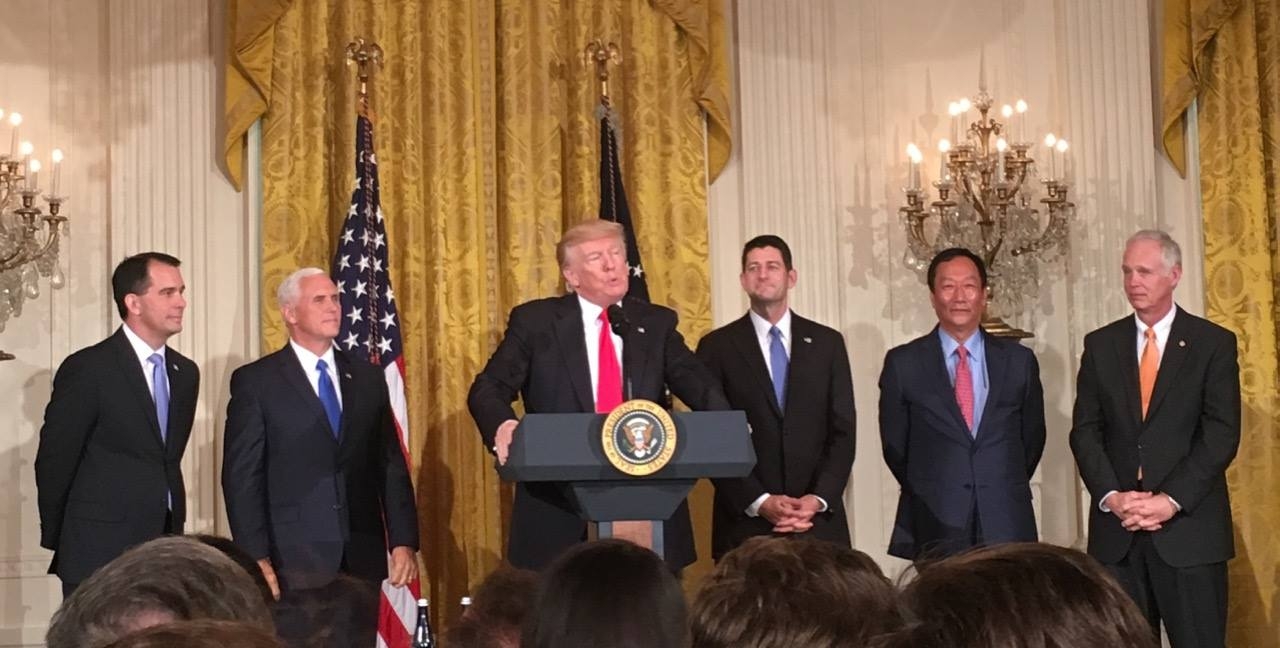 Republicans split on how fast to pass bill as Senate
Majority Leader says too many unanswered questions.

MADISON, Wis. — Foxconn Technology Group is not saying whether it plans to invest $30 billion in the United States, as President Donald Trump claimed the company’s leader told him “off the record.”

Trump announced to a group of small-business leaders at the White House on Tuesday that Foxconn CEO Terry Gou told him privately that the Taiwanese electronics manufacturer could invest as much as $30 billion in the U.S. The company signed a deal with Wisconsin last week to build a $10 billion display panel manufacturing plant and Trump did not specify where the additional spending would be.

Foxconn reiterated in a statement Wednesday that the Wisconsin plant “will be the first of a series of facilities we will be building in several states.” It did not address Trump’s statement about the total investment amount or Trump’s claims that Gou told it to him in confidence.

“We have not yet announced our investment plans for other sites,” Foxconn said in the statement. “We will provide an update as soon as we have finalized those plans.”

The company may be looking at a separate Wisconsin site in Dane County, The Milwaukee Journal Sentinel reported Wednesday , citing multiple sources it did not identify. The paper said no offers have been exchanged and there were no guarantees any would be, but there could be developments in the next two months.

It wasn’t clear what kind of facility the second site would be.

House Speaker Paul Ryan said in an interview with WITI-TV that the company would expand in Wisconsin, to “tap into our intellectual talent in Madison and Milwaukee.”

“What we are getting from Foxconn is that they are committing to Wisconsin,” Ryan said. “We do anticipate that there’s going to be more than just this one location in the Racine-Kenosha area.”

Gou previously said that Foxconn was considering locating in seven states before Trump announced last week that a massive liquid crystal display monitors plant would be going to Wisconsin. Other states that Foxconn said it was looking at were Michigan, Illinois, Indiana, Ohio, Pennsylvania and Texas.

Foxconn is the world’s largest contract maker of electronics, with factories across mainland China. It’s best known for making iPhones and other Apple devices but its long list of customers includes Sony Corp., Dell Inc. and BlackBerry Ltd.

The new plant in Wisconsin, which is scheduled to open in 2020 with 3,000 employees, will construct liquid crystal display monitors used in televisions and computers. It would bring Foxconn closer to its biggest market and be the first LCD monitor factory located outside of Asia.

The Wisconsin Legislature is considering a $3 billion incentive package that must be passed by the end of September as part of the deal with Foxconn. A public hearing on the proposal was scheduled for Thursday, just six days after a draft of the plan was released and eight days after news of the state’s deal with Foxconn broke.

Republicans who control the Legislature are split on how quickly to pass the bill, with state Senate Majority Leader Scott Fitzgerald saying there are too many unanswered questions about the tax breaks that must be addressed before a vote. Some Democrats and others have questioned whether the incentives are too much, while also raising concerns about the proposed waiving of state environmental permit requirements and other regulations to speed up construction.

U.S. Rep. Mark Pocan, a Democratic congressman who represents a swath of south-central Wisconsin that includes Madison, questioned during a news conference Wednesday how many jobs will actually materialize and how much those workers will really be paid. He added that he’s worried Foxconn might abandon its plans if Trump fails to follow through on his proposal to raise import tariffs.

“We’ve got to be very real about what this actually means for Wisconsin taxpayers,” Pocan said.

Ryan, speaking at an employee town hall in his southeastern Wisconsin congressional district, called the deal a “game-changer” that “is a generation’s worth of economic development.” Ryan said he pitched federal job training benefits and tax credits that make the U.S. competitive to Foxconn officials who were deciding whether to locate here.

Ryan said he believed Wisconsin’s central location, and an abundance of colleges, universities and technical colleges where future workers could receive the necessary training helped the state win the project. Foxconn is eyeing property in Ryan’s district.

“It’s a really good deal for Wisconsin,” he said.