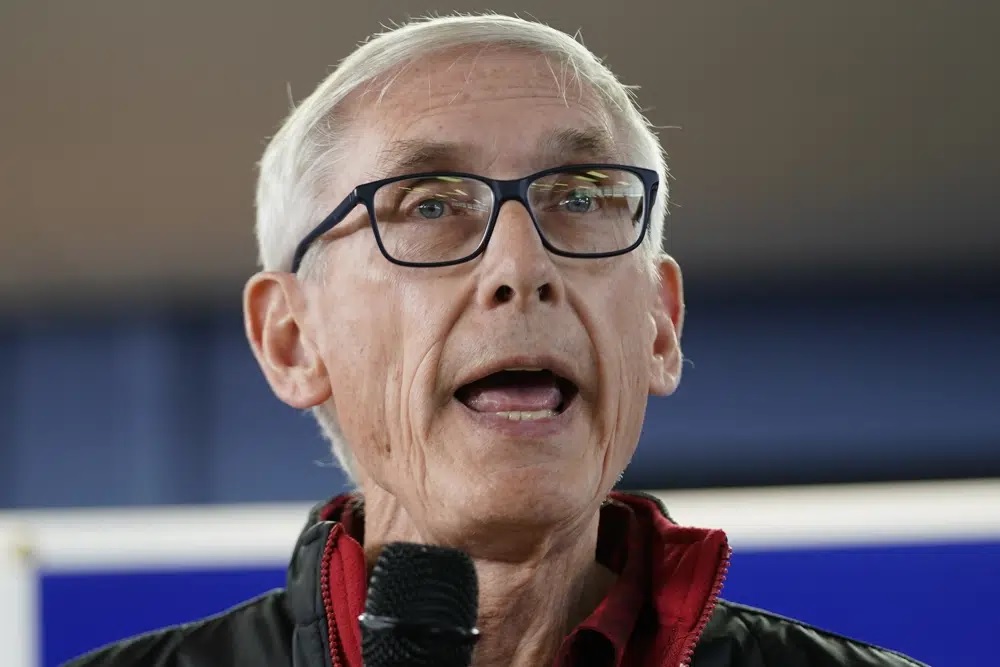 FILE - Wisconsin Democratic Gov. Tony Evers speaks at a campaign stop, Oct. 27, 2022, in Milwaukee. Evers promises to cut taxes and to compromise with Republicans who control the Wisconsin Legislature in order to increase funding for schools and local governments, according to excerpts from his State of the State speech released ahead of its delivery Tuesday, Jan. 24, 2023. (AP Photo/Morry Gash, File)

MADISON, Wis. (AP) — Democratic Gov. Tony Evers promises to cut taxes and to compromise with Republicans, who control the Wisconsin Legislature, in order to increase funding for schools and local governments, according to excerpts from his State of the State speech released ahead of its delivery Tuesday.

Evers is delivering his fifth State of the State speech and the first of his second term on Tuesday night during a joint meeting of the state Senate and Assembly.

Evers, in excerpts of his speech released ahead of its delivery, vows to follow through on his promises to tap the state’s record-high projected budget surplus of nearly $7 billion to increase funding for K-12 schools, cut taxes for the middle class and get more money to Wisconsin’s counties, cities, towns and villages.

“The bottom line for me has always been making sure our communities have the resources they need to meet basic and unique needs alike,” Evers said in the excerpts. “But there are a lot of different ways we can find compromise to achieve that goal, and together we will.”

Evers has called for increasing funding for local governments through the shared revenue program by 4% in each of the next two years, which would be a $91 million increase. His plan includes $10 million in funding to be spent specifically on police, fire and emergency services, with the money distributed based on population.

Republican Assembly Speaker Robin Vos and Senate Majority Leader Devin LeMahieu have discussed another approach that would devote 1% of the state sales tax to replace shared revenue. The idea is that as sales taxes increase, so too does funding for local governments.

Evers has met with Vos and LeMahieu privately since his reelection win in November, a noticeable thawing of their icy relationship from his first term when they rarely spoke. Both sides have shown some signs of being willing to compromise on some issues, like local government funding.

They’ve been farther apart on others, like abortion and tax cuts.

In an interview with WisconsinEye Tuesday afternoon ahead of the speech, Vos and LeMahieu said they hoped Evers would offer more room for bipartisan compromise than he did in his inaugural address.

“He talks out of one side that he wants to work together but continues to push a lot of ideas that are non-starters for us,” LeMahieu said.

Evers, in his speech, reiterates his support for targeting tax cuts to the middle class. Republicans are backing a flat tax plan that would reduce rates for the state’s wealthiest filers.

“When we deliver tax relief—and we will deliver tax relief—we’re going to do it responsibly by ensuring we can keep taxes low now and into the future, and we’ll do it without driving our state into debt or causing devastating cuts to priorities like public schools and public safety,” Evers says in the excerpts.

Evers has come out against a Republican plan to move toward a flat 3.25% income tax rate, instead pushing for his tax cut plan that targets reductions to middle class taxpayers. Evers also wants to spend more on public K-12 schools than Republicans and he opposes expanding the taxpayer-funded private school voucher program, which is another GOP priority.

Evers, in his speech, will argue that the current funding system for schools is not sustainable, citing the rising number of communities that have voted to raise property taxes to benefit schools.

“This system means drastic differences in outcomes for our kids—creating winners and losers, haves and have-nots,” Evers says in the prepared remarks. “I am going to deliver on the promise I made before the election to use a portion of our state’s historic surplus to make an historic investment in our kids and our schools.”

Vos, an outspoken proponent of expanding school choice, opposed increased funding for education without tying it to reforms that would let parents decide which school to send their children to.

“There’s a major problem we have and it’s not solved by just putting more money in,” Vos told WisconsinEye.

Evers won a second term in November and has vowed to push issues that polls have shown a majority of Wisconsin residents support, like increasing funding for schools, legalizing marijuana, repealing the state’s 1849 law banning abortion and expanding the state’s Medicaid program. Those issues have historically been backed by Democrats, but largely opposed by Republicans who have held the majority in the Legislature since 2011.

The State of the State comes three weeks before Evers will deliver his two-year state budget proposal to the Legislature. That will set all of the spending priorities for the next two years and lay out what Evers wants to do with the budget surplus. Lawmakers will spend the next five months dissecting that plan before they pass their own.