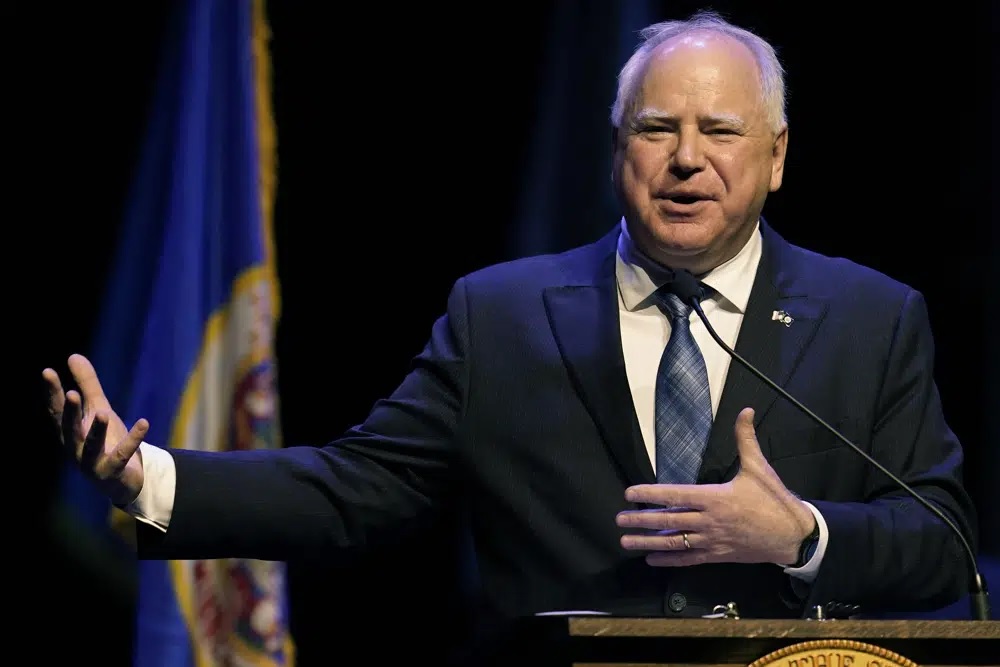 FILE - Minnesota Gov. Tim Walz delivers a speech after being sworn in for his second term during his inauguration, Monday, Jan. 2, 2023, in St. Paul, Minn. (AP Photo/Abbie Parr)

The Democratic governor went to Adams Spanish Immersion Elementary School in St. Paul to echo the pledge he made in his second inaugural address two weeks ago to “be bold” and use the “historic opportunity” of a $17.6 billion projected budget surplus to make Minnesota the best state in the country for children and families.

“This gives us an opportunity that has not been presented very often,” Walz said at a news conference. He called it a “generational” chance to make investments that could put Minnesota at the forefront of improving education and reducing child poverty.

Walz also called for increasing the state’s child care credit to allow families making under $200,000 to receive up to $4,000 for one child, $8,000 for two kids and up to $10,500 for three to help them with day care costs. Many families could qualify for both tax credits.

The governor’s proposals are part of a bigger overall state budget he’s due to announce next Tuesday, which is expected to total in the mid- to high $50 billion range. He also plans to roll out other pieces of his budget in the coming days.

Walz told reporters his overall budget proposal will include tax rebates from the surplus that all filers would receive in the coming months, though he didn’t say how big. That money would arrive in taxpayers’ bank accounts much sooner than the proposed tax credits. But Democratic legislative leaders have been unenthusiastic about rebates, saying they wanted to prioritize families with kids.

Other highlights include a 4% increase in the state’s general education funding formula for next year and 2% for the year after. Breakfasts and lunches would be free for all students. There would also be more money for hiring school counselors, nurses and social workers.

And the governor would create a new Department of Children, Youth and Families that would be separate from the Department of Education. It would take over several programs now run by the Department of Human Services, an agency that critics have said is too big to manage effectively.

“This is a bold education budget that recognizes the scale of the multi-billion-dollar challenges we’re facing in Minnesota’s classrooms, from staffing, to mental health, to the rising costs of educating students in poverty and with special needs,” Denise Specht, president of the teachers union Education Minnesota, said in a statement.

Democratic leaders of the Senate education committees said earlier Tuesday that they’re closely aligned with the governor and will sort out any difference as the legislative session unfolds.

“When you look at what we have as a surplus, and what we have available to us … it’s more or less a drop in the bucket,” Sen. Mary Kunesh, of New Brighton, who chairs the education funding committee, told reporters.

“And we pride ourselves on being an education state?” Cwodzinski asked.

But Republicans, who are in the minority in both chambers this year, said the governor’s proposals would waste the surplus and expand the bureaucracy without improving school performance.

“The Democrats’ education spending proposals are really a public relations stunt to send even more money into struggling schools without any accountability to parents or student achievement,” Sen. Jason Rarick, of Pine City, ranking Republican on the education funding committee, said in a statement.