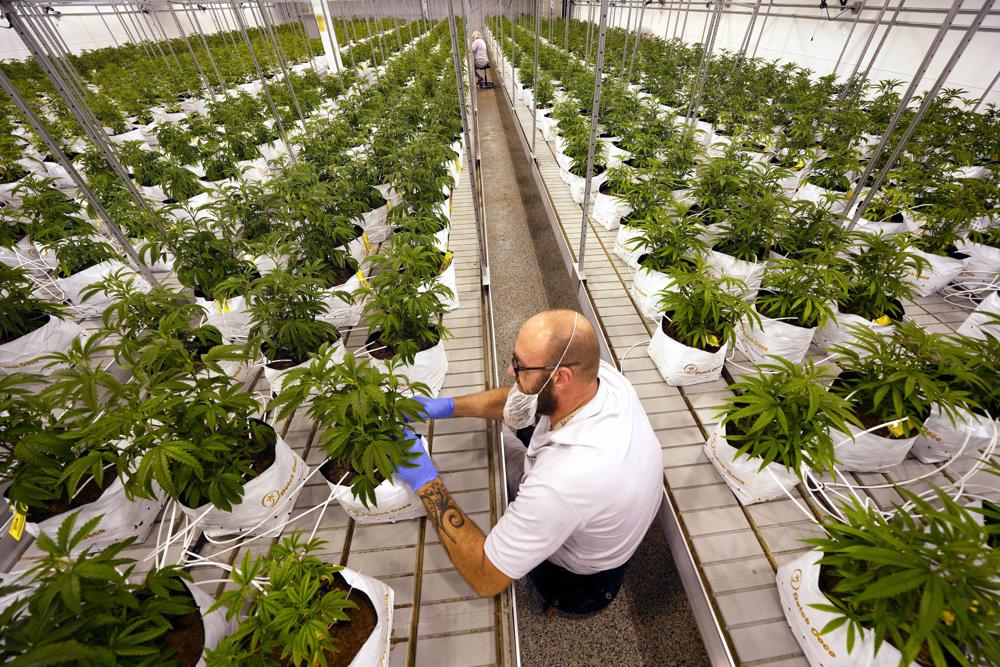 FILE - Jeremy Baldwin tags young cannabis plants at a marijuana farm operated by Greenlight, Oct. 31, 2022, in Grandview, Mo. Marijuana advocates are looking toward their next states to target after experiencing some mixed results in the recent elections. Cannabis legalization measures for adults passed in Maryland and Missouri but failed in Arkansas, North Dakota and South Dakota. Supporters already are looking toward a March legalization vote in Oklahoma. (AP Photo/Charlie Riedel, File)

ST. PAUL, Minn. (AP) — The Minnesota Board of Pharmacy on Monday sued a Moorhead-based manufacturer of THC-laced gummies, saying the company’s candies contain far stronger doses of the chemical that gives marijuana its high than state law allows.

The lawsuit alleges that Northland Vapor Co. and its stores in Moorhead and Bemidji are violating Minnesota’s new law allowing low-potency edible and drinkable cannabinoids. Those products must not contain more than 5 milligrams of hemp-derived THC in a single serving or more than 50 milligrams per package. But investigators found candies with 20 times the legal dose and packages containing 50 times the limit, it alleges.

The “Death by Gummy Bears” products also violate a provision that edibles must not resemble people, animals or fruit, the lawsuit says. Another product, sold under name “Wonky Weeds,” also exceeded the state’s limits.

The Board and the Food and Drug Administration inspected Northland Vapor’s manufacturing facility in Moorhead on Nov. 8, and embargoed the noncompliant products, which it estimated have a retail value of over $7 million.

The lawsuit, filed in Clay County District Court in Moorhead, seeks a court order that those products be destroyed, and for the company to desist from selling edibles that violate the state law, which took effect July 1.

Northland Vapor attorney Tyler Leverington said in a statement that the company tried to work with the state to comply with the law, “but someone decided Northland should be made an example.”

Recreational marijuana itself remains illegal in Minnesota. But Democrats who took full control of state government in the November elections plan to make a push to broadly legalize it in the upcoming legislative session. Senate Republicans blocked previous attempts but lost their majority.