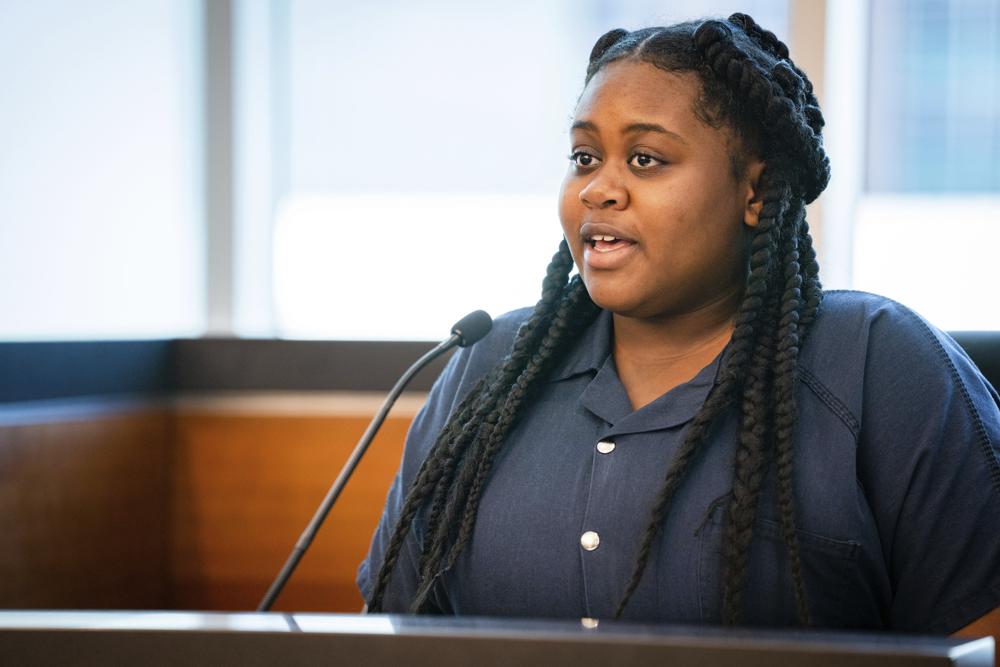 FILE - Pieper Lewis gives her allocution during a sentencing hearing on Sept. 13, 2022, in Des Moines, Iowa. Lewis, an 18-year-old sex trafficking victim who killed her rapist, was being held in an Iowa jail Wednesday, Nov. 9, and could face a prison term after she walked away last week from a Des Moines women’s shelter where she was serving probation for a manslaughter conviction. (Zach Boyden-Holmes/The Des Moines Register via AP, File)

DES MOINES, Iowa (AP) — An judge set a hearing for January to consider whether to order prison for an 18-year-old sex-trafficking victim in Iowa who killed her rapist and pleaded guilty last year to involuntary manslaughter and willful injury.

Pieper Lewis had faced a 20-year prison sentence in the June 2020 killing of Zachary Brooks, 37.

Lewis was 15 when she stabbed Brooks more than 30 times in a Des Moines apartment.

She initially was charged with first-degree murder, but prosecutors agreed to a plea deal dropped that charge. Lewis has said that she was trafficked against her will to Brooks for sex multiple times and stabbed him in a fit of rage after he raped her again.

Lewis was sentenced Sept. 13 to probation for five years to be served at a Des Moines women’s shelter, but less than two months later she cut off the court-ordered GPS ankle monitor and walked away from Fresh Start Women’s Center. She was arrested five days later and put in jail, where she remains.

An Iowa Department of Corrections probation officer had asked the court to revoke the terms of her probation, and Judge David Porter set a hearing Friday to consider the matter. But after meeting briefly with lawyers, Porter scheduled a new hearing on Jan. 18.

Matthew Sheeley, a lawyer for Lewis, said they plan to contest the proposed revocation.

Assistant Polk County Attorney Meggan Guns said when a defendant challenges a proposed revocation, a judge typically sets a hearing where evidence can be presented, which is what occurred Friday.

Porter told Lewis at her sentencing hearing in September that he was giving her a second chance by allowing her to serve time at the women’s shelter and complete community service instead of prison. He said she wouldn’t get a third chance.

The Associated Press does not typically name victims of sexual assault, but Lewis agreed to have her name used previously in stories about her case.