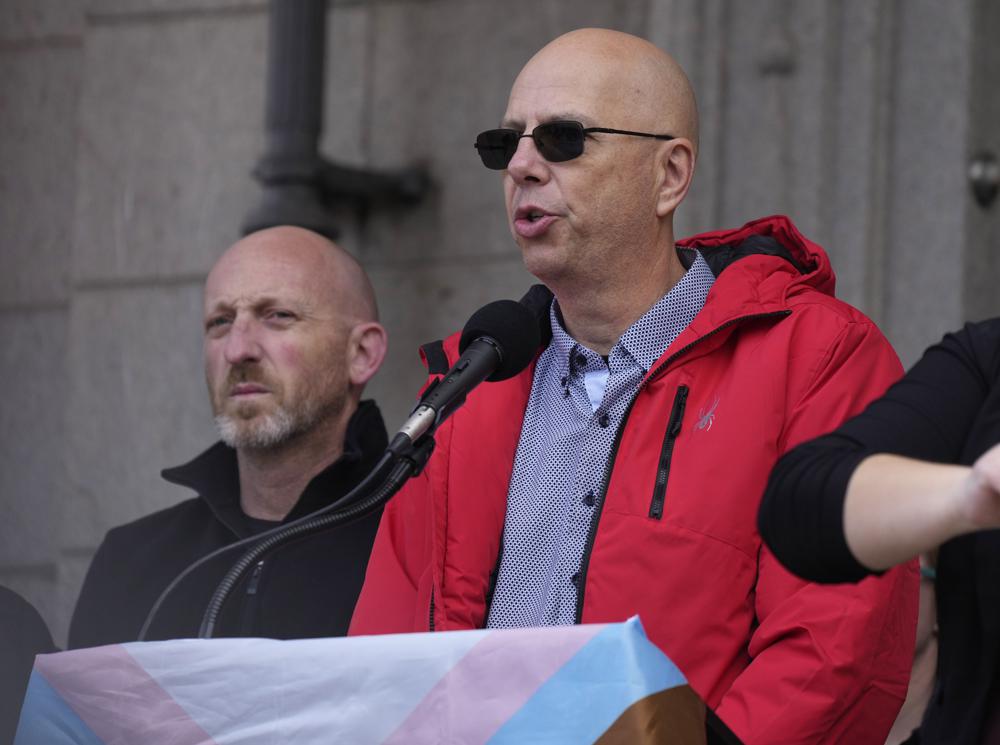 Co-owners of Club Q, Matthew Haynes, front, and Nic Grzecka, address the crowd after a 25-foot historic pride flag was displayed on the exterior of City Hall to mark the weekend mass shooting at the gay nightclub Wednesday, Nov. 23, 2022, in Colorado Springs, Colo. The flag, known as Section 93 of the Sea to Sea Flag, is on loan for two weeks to Colorado Springs from the Sacred Cloth Project. (AP Photo/David Zalubowski)

COLORADO SPRINGS, Colo. (AP) — The co-owner of the Colorado Springs gay nightclub where a shooter turned a drag queen’s birthday celebration into a massacre said he thinks the shooting that killed five people and injured 17 others is a reflection of anti-LGBTQ sentiment that has evolved from prejudice to incitement.

Nic Grzecka’s voice was tinged with exhaustion as he spoke with The Associated Press on Wednesday night in some of his first comments since Saturday night’s attack at Club Q, a venue Grzecka helped build into an enclave that sustained the LGBTQ community in conservative-leaning Colorado Springs.

Authorities haven’t said why the suspect opened fired at the club before being subdued into submission by patrons, but they are facing hate crime charges. The suspect, Anderson Lee Aldrich, 22, has not entered a plea or spoken about the incident.

Grzecka said he believes the targeting of a drag queen event is connected to the art form being cast in a false light in recent months by right-wing activists and politicians who complain about the “sexualization” or “grooming” of children. Even though general acceptance of the LGBTQ community has grown, this new dynamic has fostered a dangerous climate.

“It’s different to walk down the street holding my boyfriend’s hand and getting spit at (as opposed to) a politician relating a drag queen to a groomer of their children,” Grzecka said. “I would rather be spit on in the street than the hate get as bad as where we are today.”

Earlier this year, Florida’s Republican-dominated legislature passed a bill barring teachers from discussing gender identity or sexual orientation with younger students. A month later, references to “pedophiles” and “grooming” in relation to LGBTQ people rose 400%, according to a report by the Human Rights Campaign.

“Lying about our community, and making them into something they are not, creates a different type of hate,” said Grzecka.

Grzecka, who started mopping floors and bartending at Club Q in 2003 a year after it opened, said he hopes to channel his grief and anger into figuring out how to rebuild the support system for Colorado Springs’ LGBTQ community that only Club Q had provided.

City and state officials have offered support and President Joe Biden and First Lady Jill Biden reached out to Grzecka and co-owner Matthew Haynes on Thursday to offer condolences and reiterate their support for the community, as well as their commitment to fighting back against hate and gun violence.

Grzecka said Club Q opened after the only other gay bar in Colorado Springs at that time shuttered. He described that era as an evolution of gay bars. Decades ago, dingy, hole-in-the-wall gay venues were meant largely for finding a hookup or date, said Grzecka. But he said once the internet offered anonymous ways to find love online, the bars transitioned into well lit, clean non-smoking spaces to hang out with friends. Club Q was at the vanguard of that transition.

Once he became co-owner in 2014, Grzecka helped mold Club Q into not merely a nightlife venue but a community center — a platform to create a “chosen family” for LGBTQ people, especially for those estranged from their birth family. Drag queen bingo nights, friendsgiving and Christmas dinners, and birthday celebrations became staples of Club Q which was open 365 days a year.

In the aftermath of the shooting, with the community center that was Club Q torn away, Grzecka and other community leaders said they are channeling grief and anger into reconstituting the support structure that only that venue had offered.

“When that system goes away, you realize how much more the bar was really providing,” said Justin Burn, an organizer with Pikes Peak Pride. “Those that may or may not have been a part of the Club Q family, where do they go?”

Burn said the shooting pulled back a curtain on a broader lack of resources for LGBTQ adults in Colorado Springs. Burn, Grzecka and others are working with national organizations to do an assessment of the community’s needs as they develop a blueprint to offer a robust support network.

Grzecka is looking to rebuild the “loving culture” and necessary support to “make sure that this tragedy is turned into the best thing it can be for the city.”

Organized by the LGBTQ group United Court of Pikes Peak Empire, the dinner’s bright atmosphere felt resilient. People smiled, squeezed each other in hugs, and told stories from the podium about those who lost their lives.

Earlier that day at the memorial, a trickle of people walked slowly along the wall of flowers and vigil candles that had burnt out. Five white crosses were fixed with wooden hearts inscribed with the names of those who had died and notes scribbled by mourners. “I hope you dance,” someone wrote on victim Ashley Paugh’s wooden heart.

On a concrete barrier a message was scrawled, “Please hear our calls. Protect us, our home.”